With Boris Johnson turning the UK into a dictatorship, the BBC gushes over his new dog - Canary Workers’ Co-op 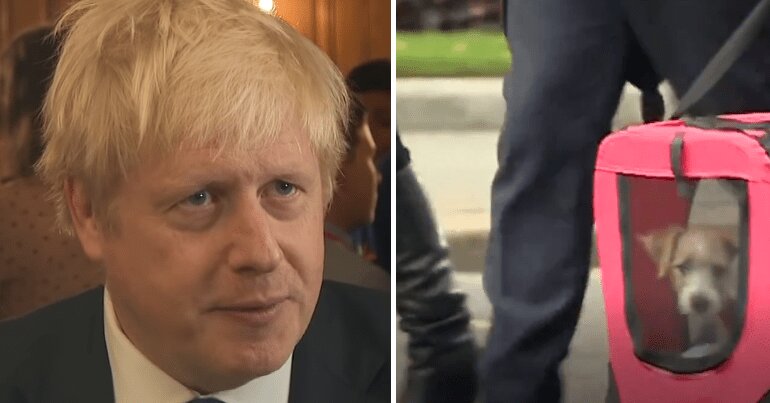 Boris Johnson is mid-way through turning the UK into a “elective dictatorship”, in the words of shadow chancellor John McDonnell. Yet the BBC is gushing over the prime minister’s new dog:

The BBC is now promoting Johnson’s new dog while the PM threatens the UK’s basic democratic principles. But the possible issues with the broadcaster’s coverage of the ongoing political crisis are more widespread.

Isn’t there a risk that there’s been an overreaction to this given that there was scheduled to be a recess anyway, and what is effectively lost is perhaps five, six, seven days of debate, and debate there will be?

But even the Conservative grandee wasn’t having it:

Come off it, this is sophistry. You know perfectly well that this is the spin of a ruthless No 10 machine. This is a significant, determined, calculated move to frustrate parliament. Don’t let anybody deceive you about anything else.

This is far from the only instance of the BBC apparently promoting Johnson’s line. As Labour MP David Lammy has pointed out:

Every single @BBCNews journalist will know this is a straight up lie. So why do they run headlines that make out it could be true?https://t.co/ZbnGalilpR

People did not find the BBC‘s dog coverage very impressive:

This isn't news, it's Downing Street public relations. Stop it.

This is definitely the story you should be focusing on, well done BBC on another excellent editorial judgement call. Luckily a racist plumped up old-Etonian hasn't just suspended parliamentary democracy and plunged the country into constitutional crisis. YAY to dog stories 😂

The PR stories pumped out to make this lying shit seem cuddly and approachable are transparent manipulation. His actions are going to kill people. Actual deaths. Stop the "let's do a dog story for a change" nonsense and concentrate on Johnson's actions & intentions.

This isn't political reporting. I was going to say it isn't politics, but it is, in the sense that you are aiding and abetting a blatant PR stunt on behalf of Cummings/Johnson.

Speculation around a possible snap general election, meanwhile, has intensified. If Labour, other opposition parties, and Tory rebels manage to bring in legislation that prevents a no-deal Brexit, that may force Johnson to call a general election.

The underpinning problem that could well force Johnson into an election is that his administration hasn’t solved the crisis of the Irish border.

Let’s recap. If the UK is going to leave the EU single market and customs union, there must be a hard border between the Republic of Ireland and the north of Ireland. That’s because the Republic of Ireland would continue being inside the EU, whereas Northern Ireland would be leaving the trading block as part of the UK. But a hard border in Ireland risks disrupting the Good Friday Agreement. The legislation and accompanying agreements were a landmark achievement of peace in Ireland between unionists and republicans.

This creates another set of problems. Not least because the Conservative-led administration depends upon the confidence of the Democratic Unionist Party (DUP) to govern. Without the DUP, neither May nor her successor could command a majority in parliament. And the central principle of the DUP, as a “unionist” party, is the continued unity between Northern Ireland and the rest of the UK. So the DUP has threatened to bring down the Conservatives unless they bin the backstop.

Inheriting this fundamental issue from May, Johnson has so far failed to come up with any credible alternatives to the ‘backstop’. So even if Johnson’s turbo-threat of ‘no deal’ convinced the 30 or so Lib Dem and Labour MPs the Tory leader needs to pass the withdrawal agreement, the DUP could simply withdraw confidence from the government forcing a general election anyway. On top of that, Johnson has a working majority of just one MP, meaning it would be very difficult for him to govern beyond Brexit.

Johnson is on the brink. At the same time, he’s threatening to turn the UK into a de facto dictatorship. But the BBC seems preoccupied with Johnson’s new Downing Street dog, peddling a clear public relations offensive from the government. That’s a shocking dereliction of duty.