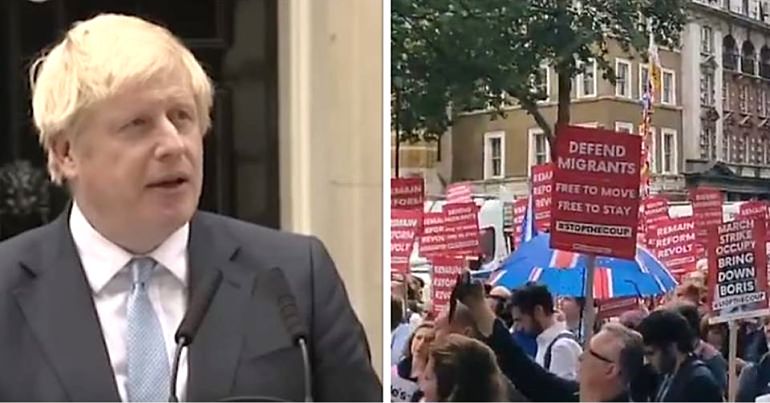 Just after 6pm on 2 September outside No 10 Downing Street, Boris Johnson made an announcement. Some expected he’d call a general election for 14 October. And while he didn’t officially call an election, he instead made a half-hearted pre-election style speech. A speech filled with grand promises but no real substance.

But what did have substance were the “stop the coup” chants from nearby protesters and a cross-party plan to block his no-deal agenda.

Traffic at a standstill and chants of "stop of the coup" and talk of "shutting down the streets" in response to parliament being shut down pic.twitter.com/QcAfeasz9M

In an attempt at a pre-election war cry, Johnson announced “we are recruiting another 20,000 police officers” to make “your streets safer”. This was followed by promises to improve the NHS and to give children a “superb education”. Big promises but unfortunately little detail. In any case, the NHS and police claims were reduced to tatters when Johnson first made them.

But just like the protesters outside Downing Street, people online weren’t buying it:

… what utter meaningless crap. Full of sound and fury, signifying nothing.
He-who-is-unfit-for-public-office thinks it's all fine to mouth meaningless, platitudinous, disingenuous waffle.

Others focused on the protest chants:

Huge chants of “STOP THE COUP” as Boris Johnson tries to speak in Downing Street. It’s completely messing up his speech – he’s struggling to concentrate on it

Can he not hear the chants #StopTheCoup. This means we are not united!

and listen to the crowds PM Johnson

While some clearly felt Johnson bottled his election announcement:

No election. He balked it.

A cry for help

But in a desperate plea to MPs in his own party who oppose his no-deal agenda, he said “MPs should vote with the government” this week in parliament “to show our friends in Brussels that we are united”. Except the Tories, let alone the country, are anything but united.

Should MPs not back his plan, according to Johnson, it would damage the UK’s Brexit negotiations with Brussels. It could also risk a general election, which he said he ‘didn’t want’.

And while Johnson and his colleagues drank, opposition MPs were busy announcing plans to stop him. Labour MP Hilary Benn announced a plan to prevent the UK leaving the EU on 31 October without a deal “unless parliament consents”:

Some believe if MPs can succeed in extending the UK’s Brexit date, they could also frustrate Johnson’s election plans:

An early election triggered by Johnson would require a 2/3 Commons majority, which MPs could deny (even by simply abstaining) until an Article 50 extension had been secured.

An uncertain week ahead

The lead in to the UK’s exit on 31 October was already uncertain. And Johnson’s announcement on 28 August that he’d asked the Queen to suspend parliament caused even more uncertainty. Add to this a half-hearted pre-election speech, his buffoonery, and side-lining at the G7 summit, and it’s difficult to take this man seriously at all.

However, if opposition MPs get their way, from uncertainty could come some clarity. And a disastrous no-deal Brexit could be avoided.