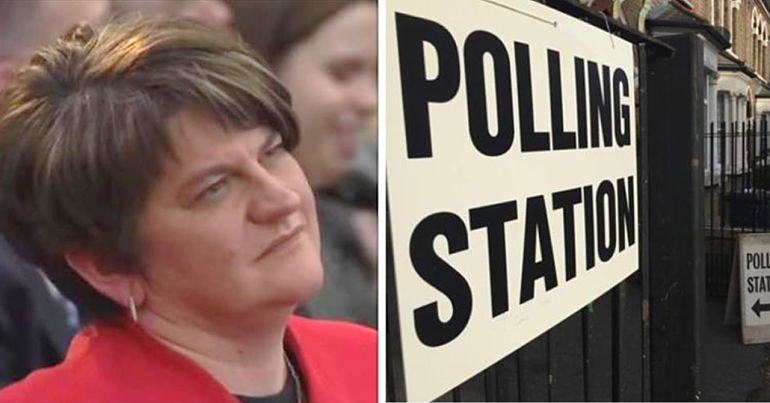 When the possibility of this election was put to the leader of the DUP Arlene Foster, she said she ‘didn’t want one’ but the DUP would fight it on its record:

Focus must be on securing a sensible deal as we exit the European Union which doesn’t build a new border between NI & rest of the UK.

We stand by our record of delivery for NI:
✅£1B to support:
📚schools,
🚘roads,
🚑hospitals,
👨‍⚕️mental health services
👨‍💻rural broadband pic.twitter.com/Z5Ctjqi7sb

But people on social media weren’t so confident of her chances.

You’re in big trouble at GE. Pengelly is losing her seat for sure. And despite what BoZo promises you – NI will have special status/BS. Britain can’t function without trade deals with EU or US – which they won’t get without GFA being protected. @SpeakerPelosi @RepBrendanBoyle

Foster said “we’re not afraid of elections, but we don’t believe it’s the right time”. Her DUP party is propping up this Tory government through a confidence and supply agreement negotiated after the 2017 general election.

But in the event of an election, Foster said the DUP “will of course stand on our record of delivery through the confidence and supply” having delivered £1bn of UK taxpayers money for the north of Ireland.

And Foster seemed confident of negotiating even further financial concessions:

The fact that we’ve delivered a billion pounds here to the people of Northern Ireland, and indeed that we’re building on now in speaking to the chancellor around the spending round which is coming on Wednesday.

Others weren’t so sure of her negotiation chances:

Oh no it looks like the renewal of your bung deal will not be getting renewed anytime soon.

People put Foster in her place

we’re not afraid of elections

Arlene that isn't going to save you if your support a No Deal that puts a border back on this island. Are you panicking that a snap GE is coming and you are about the lose your role as king-maker & you will have to face the N.I electorate that you have ignored.

Others picked up on the hesitation in her address:

While others presented her with the hard facts about the DUPs chances:

What’s ahead and consequences of an election

Just like Foster, in Johnson’s half-hearted announcement he also said he didn’t want an election. And despite weeks and weeks of big talk from both of them, neither are remotely convincing.

So whether it’s by a cross party agreement in the Commons, or by a general election, the vulnerability of all that bluster is finally being exposed.