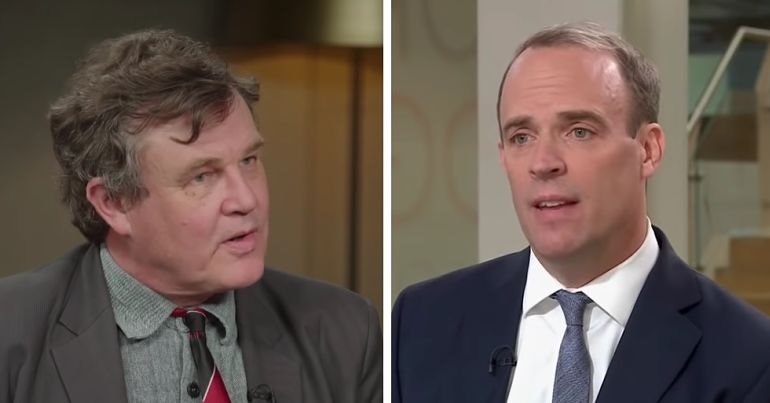 In step with its ‘special’ ally – the US – the UK government has condemned the recent attacks on Saudi oil facilities. Unlike the US, however, the UK appears to be resisting rushing to judgement over who’s to blame, thankfully.

On 14 September, explosions occurred at state-owned oil facilities in Saudi Arabia. The blasts, caused by drone attacks, led to fires that caused serious damage at an oil field and processing facility. The Houthis reportedly claimed responsibility for the attack. Yemen’s Houthis are an Iranian-backed militia which overthrew their country’s president in 2014. The Saudi-led coalition has targeted the Houthis in military strikes in Yemen since 2015.

Raab called the attack a “wanton violation of international law”. He also said:

It’s a very serious, an outrageous act, and we need to have a clear and as united as possible international response to it.

Raab littered a tweet he posted on the issue with similar highly charged adjectives:

Just spoke to @SecPompeo about this egregious attack on the security of Saudi Arabia. This was a reckless attempt to damage regional security and disrupt global oil supplies. The UK condemns such behaviour unreservedly.

As journalist Peter Oborne pointed out, though, there’s a more ‘egregious’, ‘outrageous’ and ‘serious’ situation in the region which doesn’t attract the same level of indignation from the UK:

Saudis kill thousands of innocent people with their bombing campaign in Yemen. No British condemnation.

Oborne has long been a critic of the UK government’s response to the Yemen crisis. That’s because the UK government effectively ‘sponsors‘ the Saudi war on the country. Between 2010-2018, the UK was the second-largest exporter of arms to Saudi Arabia.

In the last four years alone, the UK has exported £6.2bn worth of weapons to the country. Meanwhile, Britain’s also got staff working in Saudi Arabia’s headquarters, where its targeting rooms are located. And it is ‘liaising‘ with the country and providing “information, advice and assistance” due to its ‘strong’ military and diplomatic relationship.

In April, the UK government faced a judicial review over its continuing arms exports to Saudi Arabia. It investigated whether the UK was supporting ‘serious violations of international humanitarian law’ because Saudi Arabia used those arms in Yemen. As a result, UK arms sales to the Saudi regime are on hold after the Court of Appeal ruled they were “irrational and therefore unlawful”.

The UK is maintaining this relationship with Saudi Arabia as UN-appointed rights experts say Yemenis have faced “numerous” possible war crimes over the last few years. One of those experts, Kamel Jenoubi, recently explained:

The missiles, the airstrikes, the snipers, (that) hit people going about their daily business, often without warning and in places where there’s no active conflict

It gives the impression that there’s nowhere in Yemen that you can call safe, or where you can hide.

Oborne wasn’t the only person to notice Raab’s double standards either:

How about condemning Saudi Arabia for using British bombs to kill civilians in Yemen? It seems the @Conservatives consider oil to be more important than human lives in Yemen. Puppets of @realDonaldTrump

Umm how about Yemen

So you care about oil but not about the Yemeni Children the Saudis have murdered . Got it.

Raab’s words of condemnation may have comforted the Saudi regime, but they appalled many people. Because they betrayed a selective outrage that speaks volumes about the priorities of the British government.