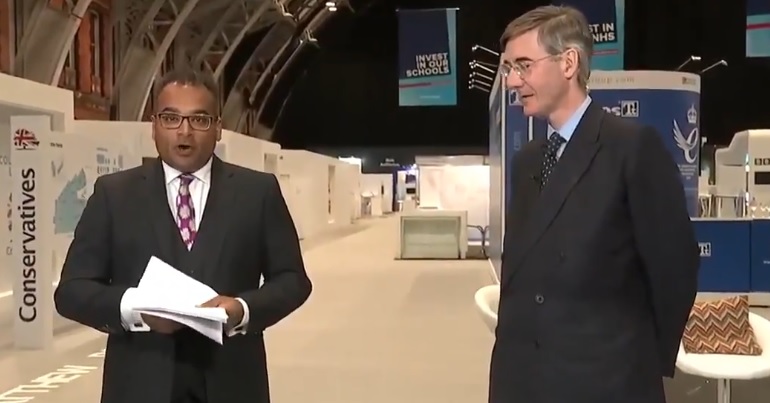 Despite stiff competition, Channel 4 News definitely wins the award for most superb moment of the Conservative Party conference. On 1 October, Krishnan Guru-Murthy introduced Jacob Rees-Mogg prior to interviewing him. And my, what an introduction it was.

Here’s how Guru-Murthy introduced Rees-Mogg before the interview:

I am joined… by Jacob Rees-Mogg… it’s our first chance to talk to him since he was appointed leader of the commons, flew to Scotland to get the queen’s approval for unlawfully proroguing parliament, then watched it all unravel in what he’s supposed to have called a ‘constitutional coup’.

Some people’s responses to his tweet suggested they too thought the introduction ‘accurate’:

Absolutely brilliant and spot on.

While others pointed to Rees-Mogg’s amusing reaction to Guru-Murthy’s lead-in:

Brilliant!
Too eyebrow raises in the space of 15 seconds
How’s that for passive aggression Eton style?

A significant amount of eyebrow deflection there! "My eyebrows are a shield of steel!" pic.twitter.com/yahbwkzJRQ

Of course, this wasn’t the only funny moment to come out of the Tory conference. Another one caught by Channel 4 News involved Boris Johnson and a rogue disposable cup. An aide passed the environmentally unsound beverage vessel to the PM, only for another aide to snatch it out of his hand seconds later, sternly saying ‘no disposable cups’. You’d think the PM would know better:

Why does this feel like it has less to do with the disposable cup and more to do with a long simmering power struggle between the two aides? The evils they exchange are👌🏽pic.twitter.com/17dbOQLkYP

There’s also the moment Scottish Tory MP Andrew Bowie effectively branded the UK ‘giving away’ Edinburgh Castle to Scotland a ‘mistake’. You know, that castle built by Scottish people hundreds of years ago, captured by the English during the wars of independence and reclaimed by Thomas Randolph, nephew of Robert the Bruce, in 1314? Yes, that one:

The UK govt 'gave away' Edinburgh Castle to the Scottish govt. He actually thinks that was a mistake. pic.twitter.com/TF7dL0fheF

Indeed, there are lots of moments from the conference worthy of ridicule, but watching Rees-Mogg’s eyebrow dance while Guru-Murthy essentially labels him the dude who duped the queen into signing off an unlawful prorogation has to be the best.