Forget arming police with Tasers. There's only one thing we really need to know about Priti Patel. - Canary 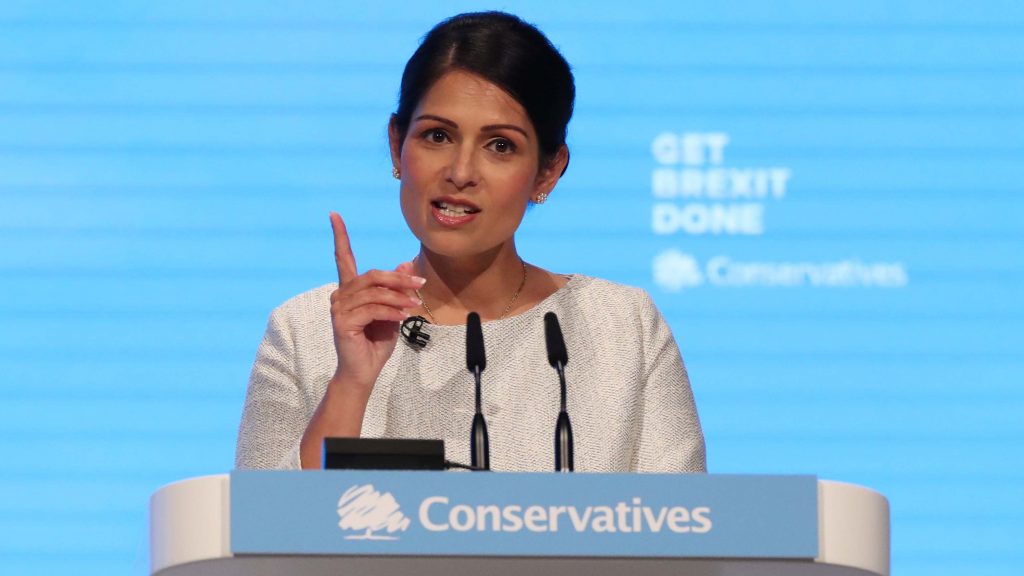 On 1 October, home secretary Priti Patel revealed plans which could see the government arm up to 60% of police officers with Tasers. She also promised to “end the free movement of people once and for all”. But amid all these pledges, there’s only one thing we really need to know about Patel’s ideology: she’s about as proud a Thatcherite as you’ll find in 2019.

With Team Johnson, Thatcherism is back in business

Patel openly refers to herself as a “Thatcherite”. And for months, her banner on Twitter has been a picture of Margaret Thatcher and US right-winger Ronald Reagan: 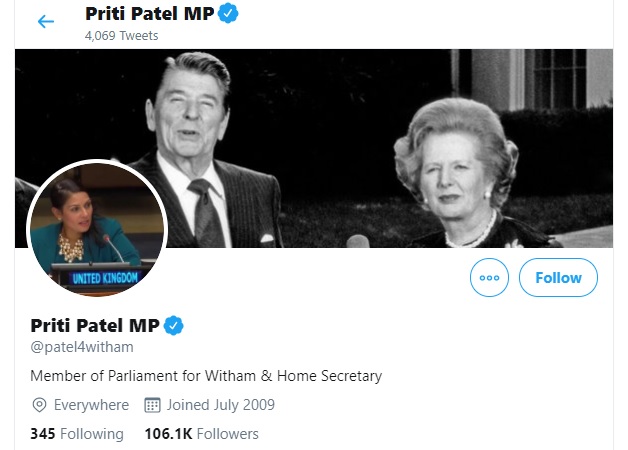 Thatcher decimated working-class communities and workers’ rights throughout Britain. That’s why many communities across the country celebrated when she died. Because she left unemployment, destruction, and poverty in her wake.

In May, Patel wrote in The House Magazine about “Thatcher’s message of hope”, suggesting it was “the risk-takers, the entrepreneurs, who alone create the wealth”. And Patel is very much part of a rightward shift in Britain’s government. Because Boris Johnson has formed a hard-right government in Thatcher’s image, with critics calling him an “ardent Thatcherite” and even “worse than Thatcher”.

As Tribune wrote in July, Patel has “nostalgia for the very worst of the Thatcher era”. And a key sign of this was that she co-authored “the 2012 book Britannia Unchained”. As Tribune explained, this aimed to shift the Conservative-led government “sharply to the right, and ‘unchain’ Britain from regulations, rules and social spending”. For the book’s co-authors, Britain was suffering from a “diminished work ethic and a culture of excuses”. They called for the cutting of benefits, which they said “reward laziness”. And Patel “called for deep cuts in a “large bloated public sector” and the “generous welfare state” which was full of “perks” that were “lavished” on the population”.

Patel also left Theresa May’s government in disgrace after failing to disclose numerous meetings with Israeli officials before asking for aid for the state’s army.

As ROAR magazine wrote in 2016, Thatcher “deregulated the financial sector with a religious ferocity”; she assaulted the labour movement and tore the British welfare state apart like no one ever had before; and people hated her not just for her policies but because of “the ugly face she put on them”, personifying “the naked logic of class warfare operating underneath the technocratic surface of her neoliberal project”.

Neoliberalism (i.e. austerity, privatising anything public, and giving companies total freedom to do what they want) has brought misery to ordinary people around the world for decades. And even its main backer has admitted that it’s boosted inequality. Under this dominant form of capitalism, money is god; and equality is a dirty word.

Racist Ronald Reagan, meanwhile, was the US version of Thatcher. He waged war on the left throughout the world. And in doing so, his government backed vicious terrorist regimes and the killing of tens of thousands of civilians. He also supported apartheid South Africa.

Our home secretary: a proud Thatcherite

In July, the Guardian wrote that Patel “has voted for a stricter asylum system, stronger enforcement of immigration rules, and against banning the detention of pregnant women in immigration jails”. It continued by stressing that:

She backed the key components of Theresa May’s hostile environment policies, presented in the immigration bills of 2014 and 2016, such as rent, work and bank account checks, all of which led to members of the Windrush generation being wrongfully told they had no lawful right to live and work in the UK.

And it quoted Clare Collier from human rights group Liberty as saying:

Priti Patel is a politician with a consistent record of voting against basic human rights protections.

Patel’s government is also continuing to punish Julian Assange for revealing the dirty secrets of the rich and powerful:

"Journalism is not a crime."

"You can't kill the truth."

So why is Julian Assange languishing in solitary confinement? #FreeJulianAssange#DontExtraditeAssange https://t.co/ah3MbEPIsi

Assange is held in de facto solitary confinement for the 'crime' of publishing the truth. And 'mainstream’ 'journalists' are so utterly conformist to state power, literally sheep-like, that no outlet is covering the story. Amazing outside of straight dictatorships. @pamfoundation https://t.co/QTKC9ySAZ0

The Independent
Julian Assange ‘subjected to every kind of torment’ in Belmarsh prison as he awaits extraditionhttps://t.co/qOeW6TNenh

In short, Patel is a proud Thatcherite. And that means she’s a class warrior – a defender of the rich and an opponent of ordinary people. Conference pledges aside, that’s all we really need to know about her and her government.