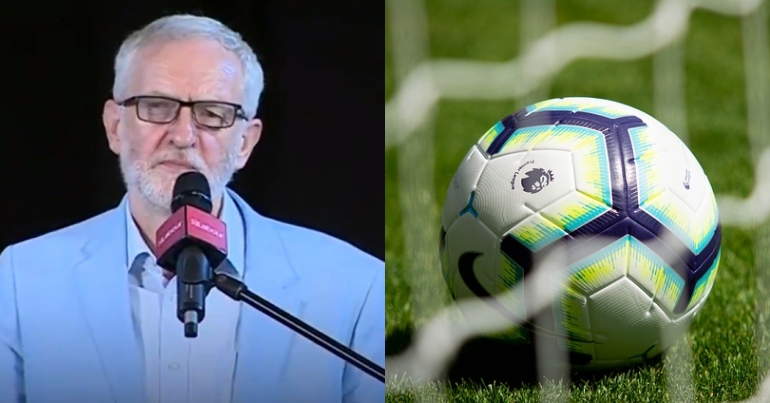 During a speech in Newcastle on 5 October, Labour party leader Jeremy Corbyn made a promise that shows he’s with the people. He promised to:

take the beautiful game away from the billionaires and hand it to the fans instead.

“Football shouldn’t be just a business…let’s take the beautiful game away from the billionaires and hand it to the fans instead.”

While Corbyn is not the first to make such a call, his message resonated with the Newcastle United fans present, whose club is owned by billionaire Mike Ashley. And while Boris Johnson has to answer whether his backers could make billions from Brexit, Corbyn, a keen football supporter himself, wants to channel money into the real people’s game.

So it made sense when Corbyn said:

And while mere speech making can come easy, Corbyn has promised to make sure the Premier League invests 5% of its TV rights income in the grassroots game. He said a Labour government would ensure supporters’ trusts could appoint and sack at least two members of the clubs’ boards. It would also allow supporters’ trusts the right to buy shares in a club when it changed owners.

A number of people took to social media to show their support for Corbyn’s plan. Even if some of the publicity came from a surprising source:

Other people got behind the idea as they simply can’t afford to go to matches any more:

I know so many fans, particularly older ones, who can’t afford to go to a match anymore..not right.

And it even appears as if Corbyn has won over some new support:

Plenty of people see many of Labour policies as common sense , (although most are so brainwashed they have to see them "blind" as it were) including these ideas on more funding to grassroots football.

Mike Ashley isn’t the only billionaire owner in the premier league. As things stand, it has 12 billionaire club owners estimated to be worth $90.8bn (£73.6bn). Additionally, the clubs earn millions every year while ordinary fans have to fork out hundreds of pounds, even for the cheapest season tickets, to watch their team.

And the billionaire involvement is starting to irk fans. Some Newcastle fans feel they’ve “suffered 12 years of Mike Ashley”, and they want him out. They’re asking:

all fans to participate in a full boycott of St. James’ Park, club merchandise and all businesses associated with the club until Mike Ashley leaves the club.

Ashley was also brought in front of a Commons committee to answer questions about working conditions at his company Sports Direct. Some of the staff there were paid less than the minimum wage. Newcastle United, like many clubs, is also sponsored by an online gaming company, which is disturbing given the high level of “probem gamblers” in the UK.

Corbyn’s plan makes sense not only for Newcastle fans but for football fans all over. Because, as Corbyn said [0:33m]:

Football is our lives, our community, and it’s the place where people go to socialise and enjoy each other’s company.

Football should belong to the people, not the billionaires. And there’s only one party sending out that clear message.