16 years on from Western invasion, bloodbath continues in Iraq - Canary 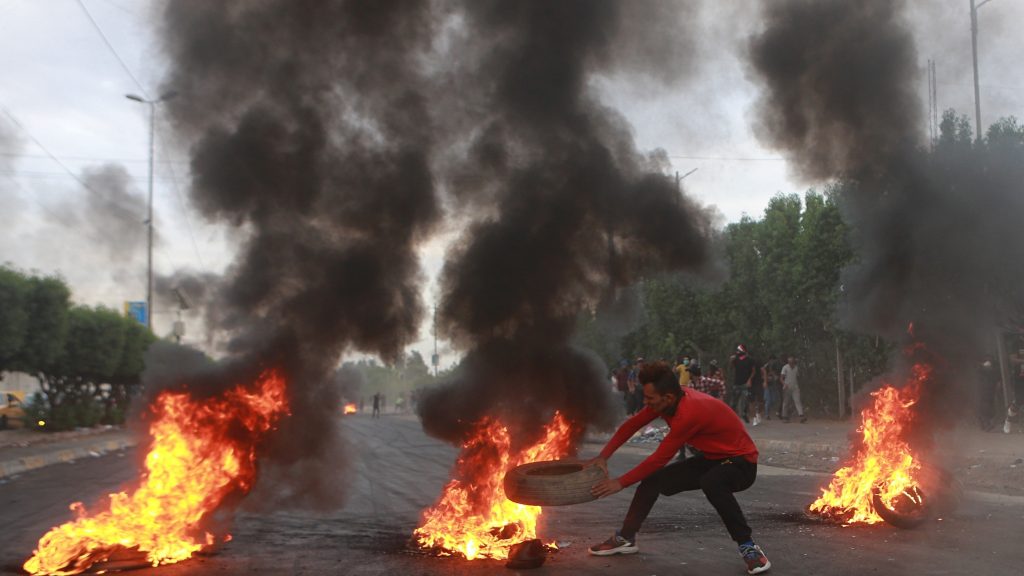 Over six days of clashes in Iraq, government forces have killed around a hundred protesters.

Authorities have killed 12 anti-government demonstrators as part of the ongoing protests in the Iraqi capital of Baghdad, the latest fatalities amid unrest that has left more than 100 people dead and thousands injured.

Iraq’s government has scrambled to contain the popular anger that has convulsed Baghdad and a number of southern cities since Tuesday.

Security forces responded with a crackdown on the spontaneous rallies of demonstrators demanding jobs, better services and an end to endemic corruption in the oil-rich country.

In the first official statement from the government accounting for the violence, interior ministry spokesman Saad Maan said 104 people had been killed over six days of unrest, including eight members of the security forces. Another 6,000 people had been wounded.

He said an investigation is under way to determine who was behind the most deadly day of violence in Baghdad on Friday.

The unrest is the most serious challenge facing Iraq two years after the victory against Daesh (Isis/Isil).

The chaos also comes at a critical time for the government, which has been caught in the middle of increasing US-Iran tensions in the region. Iraq is allied with both countries and hosts thousands of US troops, as well as powerful paramilitary forces allied with Iran.

Iraq’s most senior Shia spiritual leader, Grand Ayatollah Ali al-Sistani, has urged the protesters and the security forces to end the violence while the country’s prime minister has called on the protesters to go home.

Prime Minister Adel Abdul-Mahdi also pledged to meet the protesters wherever they are and without any armed forces, to hear their demands.

“We can’t accept the continuation of the situation like this,” Abdul-Mahdi told his cabinet in televised remarks on Saturday night.

Speaking on Sunday, Maan said protesters have burned 51 public buildings and eight political party headquarters. He claimed security forces did not confront the protesters, adding that “malicious hands” were behind targeting protesters and security members alike.

That contradicts accounts from demonstrators and journalists at the scene who have said they witnessed security forces firing on demonstrators.

Some protesters said snipers also took part in breaking up the protests. Maan said most of those killed on Friday were hit in the head and heart.

Late on Saturday, the prime minister announced a number of measures designed to appease the protesters, including paying out unemployment benefits and providing subsidised housing and land for low-income groups.

Still, demonstrators took to the streets again on Sunday – although in smaller numbers

Security forces have beefed up their presence in central Baghdad.

Army troops blocked a main road Sunday to prevent the protesters from advancing, then fired on them to push them back.

After about an hour, there was more intense gunfire, with soldiers firing over the heads of protesters as they tried to advance.

Ducking in reaction to the fire, some protesters piled over one another trying to hide behind the wall of a nearby water fountain. One protester carrying a drum chanted “peaceful, peaceful,” as others joined in. As the gunfire continued, protesters set tyres on fire.

Some demonstrators arrived in rickshaws, which have been used to carry the wounded from the bloody clashes.

Abdul-Mahdi said: “I am ready to go wherever our brotherly protesters are and meet them or send them envoys to other locations without any armed forces… I will go and meet them without weapons and sit with them for hours to listen to their demands.”

He also decreed that those killed in the protests, whether demonstrators or security forces, would be considered “martyrs” eligible for state benefits.