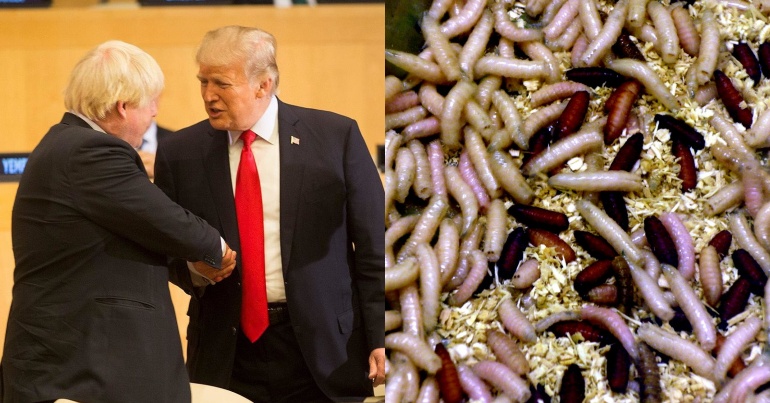 On 7 October, Unearthed reported on a leaked document showing that Boris Johnson’s planned trade deal with Donald Trump risks opening the door to lower food standards. This could potentially lead to standards falling so far that “rat droppings” and “maggots” are allowed in our food.

“significant pressure” from the Department for International Trade (DIT) to weaken the UK’s food and environmental standards to secure a trade deal with the United States.

It states that the DIT will push the Department for Environment, Food and Rural Affairs (Defra):

“Weakening our SPS regime to accommodate one trade partner could irreparably damage our ability to maintain UK animal, plant and public health, and reduce trust in our exports,” it reads.

is pushing for access to the British market for US chlorine-washed chicken and hormone-fed beef, which both fall short of the EU’s so-called sanitary and phytosanitary standards (SPS).

Furthermore, based on a series of “post-Brexit scenarios”, agreeing to US demands could “severely limit” the UK’s future trade deals with the EU. It could also force the EU to impose “a hard border in Ireland to protect the single market”.

The US Food and Drug Administration (FDA) handbook shows that US food standards allow for a certain amount of contamination in food. This includes:

As the Business Insider reported, this means – for example – that:

US producers are allowed to include up to 30 insect fragments in a 100-gram jar of peanut butter; as well as 11 rodent hairs in a 25-gram container of paprika; or 3 milligrams of mammalian excreta (typically rat or mouse excrement) per each pound of ginger.

Yet current EU standards have “no allowable limits for foreign bodies in food products”.

“What a Trump-deal Brexit” means

Unearthed reported that a Defra spokesperson said it “did not comment on leaked documents” and continued:

The UK is a world leader on animal welfare and environmental standards, and this will only continue to improve after we have left the EU.

It’s already clear that Johnson’s proposal would slash food safety and standards, exposing us to — among other things — chlorine-washed chicken and hormone-treated beef, currently banned under EU standards.

That’s what a Trump-deal Brexit would mean in practice.