Don't look away. The US is hatching a new 'war zone' in northern Syria. - The Canary 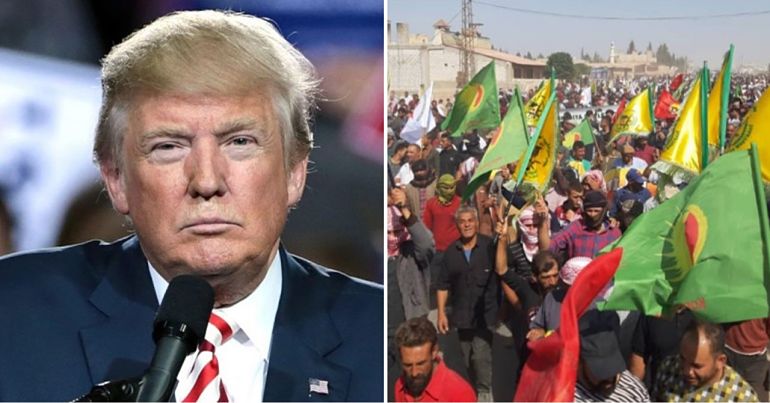 On 6 October, following a phone call with Turkey’s president, Donald Trump reportedly ‘dumped‘ the people in northern Syria (aka Rojava) who led the way in defeating Daesh (Isis/Isil). This move followed months of Turkish threats to invade the area and crush its progressive revolution.

A US statement has essentially thrown anti-Daesh fighters in Rojava under the bus. In exchange, Turkish president Recep Tayyip Erdoğan has agreed to take responsibility for captured Daesh fighters. 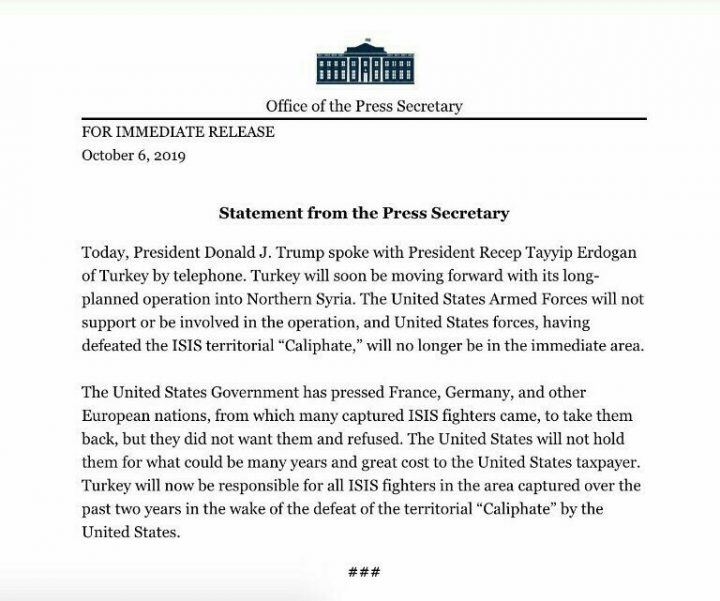 The statement failed to mention an agreement made between the US and Turkey to create a “safe zone” in the largely Kurdish area of northern Syria which would “forestall a Turkish military offensive”.

The Guardian reported that a spokesperson from the Kurdish-led Syrian Democratic Forces (SDF) “accused the US of leaving the area to ‘turn into a war zone'”.

The SDF is the frontline force responsible for defeating Daesh. The progressive Kurdish-led YPG and YPJ militias are at the heart of the SDF. It was these forces that defeated Daesh in its de facto Syrian capital of Raqqa. Yet Turkey classifies these groups as terrorist organisations, with no valid justification.

According to Al Jazeera on 7 October, Erdoğan said the Turkish army is now “ready to launch operations against Kurdish fighters in Syria at any moment”. He stated:

we can come any night without warning. It is absolutely out of the question for us to further tolerate the threats from these terrorist groups.

‘The US stands with fascism and genocide’

A member of an internationalist group on the ground in Rojava told The Canary:

These actions from the US are a declaration of intent and of whose side they’re on. It’s clear they stand with fascism and genocide, not the people of the region struggling to create a better world.

The US, like all nation-states, looks only after its own interests of power, control, and wealth.

As the SDF reported, US forces have now “withdrawn from border areas with Turkey”. It also noted:

Turkey’s unprovoked attack on our areas will have a negative impact on our fight against ISIS and the stability and peace we have created in the region in the recent years. As the Syrian Democratic Forces, we are determined to defend our land at all costs.

The Society Protection Force (HPC) is the “founding and defense force of the Rojava revolution”. The HPC has vowed it “will never accept the invasion”, and HPC member Emine Mihemed Hesen said:

As long as we have a drop of blood, we will resist.

Solidarity campaign group #RiseUp4Rojava issued a call “for a worldwide mobilization against a Turkish invasion”. As it noted:

Tanks and heavy guns are already waiting at the Turkish border, F16 fighter jets are ready to go and the Turkish occupying army is preparing to wipe out the Democratic Federation [of Northern Syria]. In their wake, tens of thousands of members of Islamist gangs will march into Rojava and Northeast Syria.

In 2018, Turkey and its allies invaded and occupied Rojava’s Afrin region. As The Canary previously reported, this led to:

extensive looting, “widespread human rights violations”, and war crimes. It also allegedly relied on the support of fascists and extremist groups similar to al-Qaeda. As one northern Syrian media outlet has argued, this attack amounted to “ethnic cleansing“.

The Turkish regime has also “been found guilty by the Permanent Peoples’ Tribunal of war crimes against the Kurdish people both at home and abroad”.

As #RiseUp4Rojava explained, Erdoğan’s latest move will lead to:

what we see every day in Afrin, the territory occupied by Turkey: murder, rape, torture and the expulsion of the local population. A new war would plunge Syria and the whole of the Middle East into renewed chaos and drive hundreds of thousands of people into flight from Turkish troops and their Islamist mercenaries

The move was also widely condemned on social media:

After using the Kurds as the ground troops to defeat the common enemy of ISIS, the USA is now paving the way for a massive bloody invasion of Rojava by the racist, genocidal dictator Erdoğan. Time to speak out! https://t.co/U9zIUvBFgK

This is an incredibly dangerous move by Trump. Turkish invasion would be a disaster, and comes after Kurds have acted in good faith on the Security Mechanism – which now leaves them at huge risk from invading forces. UK should object – but is too busy toadying to Trump. https://t.co/2EqduLcQTT

Basically the US persuaded the SDF Kurds to dismantle defensive positions that deterred Turkey, promising security guarantees in exchange. Then once the SDF Kurds became defenseless, Trump gave Erdogan the green light to invade. Hard to imagine a more sinister sequence of events. https://t.co/Of9wloQKv1

One of the most shameful episodes of American history is about to take place: the genocide of our staunch former allies, the Kurds, in the fight against ISIS. [photo via @AFP] pic.twitter.com/6FFGUIchu9

‘International powers aligning’ against the Middle East’s most progressive revolution

As Tom Anderson wrote in The Canary:

Erdoğan’s stated aim is to secure Turkey’s border with Syria. But in fact, Erdoğan wants to stamp out the hope which has been created by the ideas of the Rojava revolution.

A source on the ground told The Canary:

An attack on the Rojava revolution is an attack on our values, and therefore on us.

We don’t know if there’s an attack coming in the coming days, it’s very possible… But whether or not it comes now, the Turkish state’s ultimate plan is the destruction of the Kurdish people and of the revolution and movement for freedom. This is just more proof that we can’t rely on international powers. The international powers are aligning against Rojava.

Trump’s betrayal is, perhaps, no surprise. Nor is it a surprise that he’s done a deal with the “racist, genocidal dictator” Erdoğan. While some may feel they can’t do anything to stand against these corrupt leaders, people on the ground have emphasised that offering our solidarity and sharing information about this situation is vital.