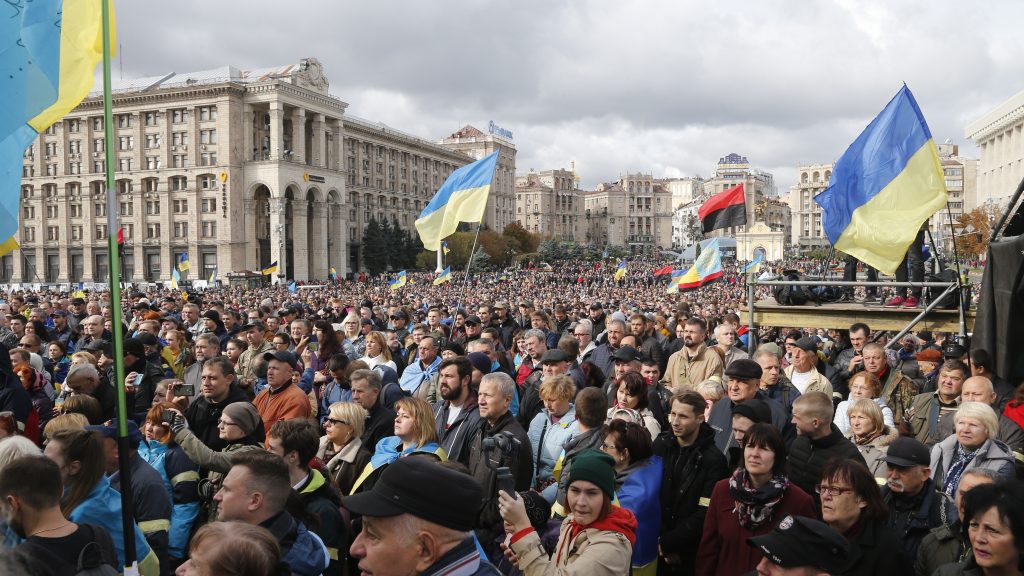 Thousands of right-wingers took to the streets of Ukraine’s capital on Sunday to protest against the centrist president’s peace plans. And as Ukraine-gate dominates US politics, this demonstration is a perfect opportunity to highlight the scandal of US support for Ukraine’s far right.

New president Volodymyr Zelensky has proposed holding a local election in Ukraine’s rebel-held east. Ukraine, Russia and Russia-backed separatists signed a tentative agreement on Tuesday on guidelines for such an election in the region, where a five-year conflict between Ukrainian troops and separatist rebels has killed more than 13,000 people. France and Germany, which helped broker the talks, praised the agreement.

Zelensky won a landslide victory after promising a peace deal with Russia and distancing himself from ethnonationalist policies imposed on his predecessor, Petro Poroshenko, by an aggressive political minority backed by the Ukrainian diaspora in North America and tacitly by the US and various European embassies.

Zelensky – described as “Russian-speaker from eastern Ukraine who plays down nationalist themes” – has cast the election deal as an intermediate step needed to organise a summit with the leaders of Russia, France and Germany to push for a peaceful settlement.

Participants in Sunday’s rally, however, denounced the move as a ‘capitulation’ to Russia, holding placards that said “Shame!” and “No to capitulation!”

Many people who have opposed Zelensky’s plans in recent days reportedly support right-wing nationalist organisations. In Russia, for example, many people see the red and black flag flown at Sunday’s protest as fascist due to its historic links with Nazi collaboration and the alleged murder of minority groups.

Zelensky has strongly defended the plan for an election in the east, vowing that the vote would follow Ukrainian laws and include candidates from Ukrainian political parties. He emphasised that the election should be preceded by a lasting ceasefire and an exchange of all prisoners.

Last month, Zelensky initiated a prisoner exchange in which Ukraine and Russia freed 35 prisoners each — the biggest swap in years. He is now pushing for a pullback of Ukrainian and separatist forces from the front line to end continuing skirmishes. A 2015 peace deal brokered by France and Germany provided for such a withdrawal to set up a safe buffer zone, but both warring parties have failed to honour the demand.

US support for Ukrainian far right

In February 2014, the US and NATO backed a coup d’état in Ukraine (aka the Euromaidan revolution). An alliance that included pro-Western neoliberal oligarchs and neo-fascist groups overthrew the democratically elected government.

The new government, and those that followed, was openly hostile to Russian speakers (and other minorities) in the east. …

The US military has also been directly supporting neo-fascists in Ukraine for some time. And the far right is on the rise in Ukrainian politics more generally.

Grayzone journalists in particular have been documenting US links to Ukraine’s far right in detail.

Zelensky, meanwhile, appears to mark a break from this trend. Yet as at least one independent journalist pointed out, mainstream media outlets seem to be missing this important context out in their coverage of the country’s current protests:

The far right has been growing in Ukraine for years. And as part of its endless obsession with Russia, the US has apparently played a key role in that. As Ukraine-gate rumbles on in the US, this is something we should all be highlighting.