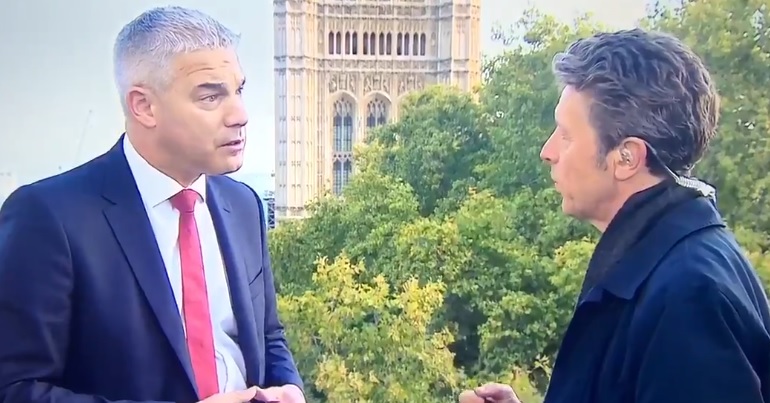 Stayt pressed Stephen Barclay on what assessments the government had done on the economic impact of Boris Johnson’s new deal. The government expects MPs to vote on this deal imminently. Barclay’s answer suggested the government has done no impact assessments, and therefore has no idea what Britain will look like after the deal comes into force.

Just watch. Brexit Secretary @SteveBarclay stating *no economic impact assessments* have been carried out.
His excuse “we only had 2 days.”

MP’s would be either stupid or complicit to vote for any #BrexitDeal today. #VoteDownTheDeal #PeoplesVoteMarch pic.twitter.com/k2gUMUGDfa

Have you done specific analysis on what this agreement would mean for the UK economy?

Well, the deal was only reached on Thursday, and the Benn legislation requires us to bring that details [sic] back to the house today.

So you haven’t had time to do the analysis?

The Brexit secretary again raised the length of time – two days – since his government agreed the deal with the EU. He continued:

In short, Barclay appeared to confirm his government has done little analysis of the economic impact of its proposed deal. He then essentially blamed the “Benn legislation” – introduced by Labour MP to eliminate the chances of a no-deal Brexit – for that lack of analysis. And he finished off by effectively arguing that analysis is pointless anyway because it can’t “take on board” everything that will happen everywhere in the future.

Conspicuously missing from his answer was any explanation why his government didn’t undertake analysis of what impact the terms of the deal would have before agreeing them with the EU. Such advance analysis was particularly important in this case because the government itself knew well in advance that the Benn Act required it to put any deal to parliament by 19 October.

An explanation on how Tory ministers have the brass to suggest analysis is irrelevant on national TV while paying private consultancy firms millions of taxpayers’ cash for advisory services, including analysis, wasn’t forthcoming either.

There’s concern among many about Johnson’s ability to deliver a deal that works for the majority of Britons. Barclay’s performance on BBC Breakfast shows people are right to be worried.