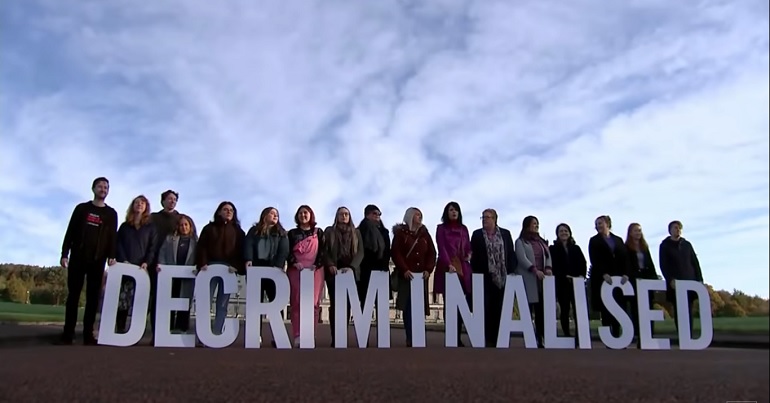 In a historic development, women in the north of Ireland now have legal access to abortion.

A nineteenth century law banning abortion, as well as legislation against same-sex marriage, has finally been repealed thanks to a bill voted through the Westminster parliament. The news has been welcomed by supporters of women’s rights and LGBTQI+ rights:

And it's official!!! Abortion and Same Sex marriage in Northern Ireland has been decriminalised.

A massive massive well done and thank you to all those who campaigned. You're all rockstars ❤️❤️❤️#NorthIsNow

Jeremy Corbyn described it as a “historic moment” and thanked campaigners for working towards this victory:

Women's right to a safe abortion and equal marriage have now become legal in Northern Ireland.

This is a historic moment. Thank you to all of the campaigners and Labour MPs who have worked tirelessly to achieve this momentous victory for equality and human rights.

Today is a good day for equality! Same-sex marriage has been legalised and abortion decriminalised in Northern Ireland – a landmark step forward. Equality is equality & I have long believed that people in Northern Ireland should have the same rights as those in the rest of the UK pic.twitter.com/zCKRymblRE

The criminalisation of abortion has had a traumatising effect on women in the north of Ireland. Speaking to Channel 4 News, Denise Phelan described her experience of having to give birth to her stillborn baby five days after she had died in her womb:

I was too sick to travel so I was forced to carry on with the pregnancy and all the psychological issues and scars that brings with it, which is something that I’ll carry with me forever… she died at 36 weeks and 3 days, and I was forced to give birth to her decaying body, basically, because she had died 5 days before I could be induced.

People have also shared other stories about the draconian effects of the anti-abortion law, which point to why this change is so significant:

v glad to wake up knowing that the girl who was literally pulled out of school by the police to be interviewed about taking abortion pills, and her mother will no longer have to endure a criminal prosecution. it should never have happened.

Today is one for the history books. Sending love to the women who made the lonely journey over the Irish Sea to access the care they needed and to those who couldn’t afford to travel and had to self-manage at home. Never again. https://t.co/2LDIT4H2F5 via @mashable

"We are on the cusp of a freedom that’s been fought for and crafted by years of fervent grassroots organising by groups like Alliance for Choice, individuals sharing their painful, unjust stories; and unrelenting collective solidarity." https://t.co/Ehh67wJso6

The decriminalisation of both abortion and same-sex marriage have given people much cause to celebrate:

BREAKING: Abortion was just decriminalized in Northern Ireland, and same-sex marriage will become legal next year.

It was the only place in the UK where both were illegal, but the UK govt set tonight as a deadline to bring its laws in line with England, Scotland and Wales. pic.twitter.com/YIfxepclLQ

People have welcomed this change which will make the law in the north of Ireland consistent with the rest of the UK. Amidst the gloom and doom around austerity, Brexit, and Boris Johnson’s flouting of democracy, we finally have some good news.