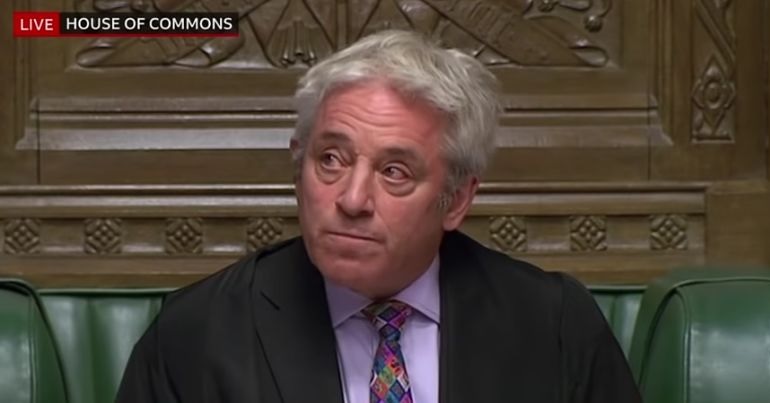 Speaker John Bercow is renowned for his verbal takedowns of MPs’ bad behaviour. He just used his chastising skills on leader of the House of Commons Jacob Rees-Mogg. Hands down, it’s his best roasting of an MP yet.

Motion (Johnson’s proposed withdrawal agreement) will not be allowed to be debated today, as that would be “repetitive and disorderly”.

Boris Johnson’s government wanted to bring a vote in parliament on its new Brexit deal on 21 October. But MPs already effectively voted on this issue on 19 October. They decided not to vote on the deal until they’ve agreed the legislation accompanying it. So Bercow wouldn’t allow a second vote on the deal.

A number of MPs were, naturally, displeased. Rees-Mogg was one of them. Although that’s not surprising, as he was the one who announced the government would try for a second vote. But Bercow dished out a humiliating reminder to the Commons leader of how he stood on the issue just a few months ago:

Bercow points out that Rees-Mogg praised his rejection of May’s thwarted attempts repeated presentation of her WA, saying that it was completely consistent with Erskine May. Mogg is thus hoist by his own petard. pic.twitter.com/yjDXBwQaLN

As Bercow pointed out, back in March when he denied a further vote for Theresa May’s Brexit deal on the same grounds, Rees-Mogg was “delighted”. But now the shoe’s on the other foot, with a deal he supports rather than rejects, Rees-Mogg isn’t so happy about the speaker following convention.

Love a bit of petard hoisting

Many people were also ‘delighted’ with Bercow’s dressing down of Rees-Mogg:

Ooo I do love a bit of petard-hoisting, especially when it involves that eerie column of dust, Jacob Rees-Mogg.

Tis a joyous thing to watch!
(It might only be improved by the cameras cutting to JRM's face in response to that)

Bercow really did tear Rees-Mogg “a shiny new orifice“. And it doesn’t look good on the leader of the Commons.