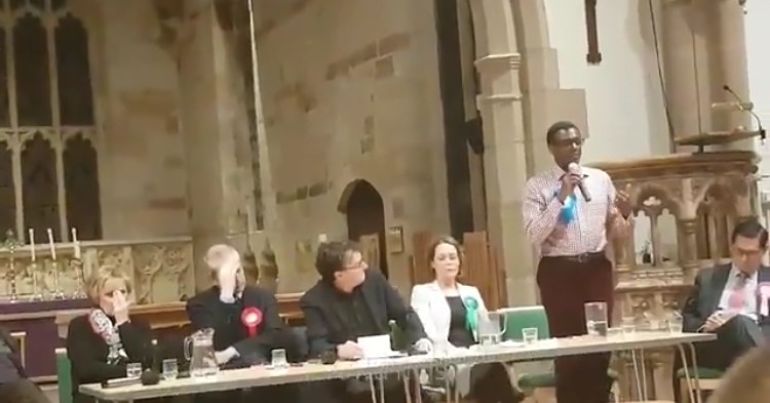 On 6 December, Tory candidate Darren Henry, standing in the Broxtowe constituency in Nottinghamshire, shocked his hustings audience. He posed a “disgraceful” solution for families relying on foodbanks. Owen Jones shared a video on Twitter of Henry’s ignorant claims:

Oh wow. The Tory candidate for Broxtowe says that people driven to food banks should just get a pay day loan. A party with genuine contempt for victims of their own policies. pic.twitter.com/vxIxHy82fn

While listening to Henry’s contribution, this was Labour Party candidate Greg Marshall’s reaction: 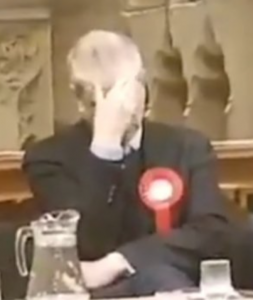 We are all Greg Marshall.

The Tory solution to foodbanks

When they go down to the foodbank, what they struggle with is maybe being able to manage their budget… A thing that can help them is how we can offer them some advice and support. When people are really, really down, and when people haven’t got the money, one of the things they can look to do is to get a payday loan or something like that.

But the audience members heckled Henry – labelling his comments “a disgrace”.

In fact, it links the increase of people relying on foodbanks directly to Conservative welfare policy. So instead of suggesting vulnerable people use high-interest payday loans to access food, the Tories should scrap the punitive Universal Credit programme. As data from 2016/17 shows, 30% of children were living in poverty – that’s 4.1 million children. But Labour will scrap the notorious Universal Credit.

Twitter users have rightly reacted with disgust to Henry’s comments.

One user said these comments show the Tories “contempt” for the vulnerable people and the working class:

The @Conservatives have always held the working class, the poor, the sick… in contempt.

They don't normally say it out loud but every now & then one of them just can't keep schtum and proudly spews forth how they despise the unfortunate.

Another said Henry’s comments invoked “discrimination of the worst kind”:

This is discrimination of the worst kind. He’s asking families who have been hit by austerity to take out loans which are double the amount borrowed and they’ll never pay off. It’s pure evil. Can he be reported for advertising profiteering financiers?

And another feels Marshall is an “MP-in-waiting”:

I was furious! Couldn’t help myself showing it. Disgraceful response to a question about #austerity

While two Twitter users discussed the reaction of both the Labour and Green candidates:

Labour also. At least they didnt try to hide their derision tho he should have been booed off the stage

But Labour could win here…

The Conservatives have no answers to the poverty they have caused in our communities….

There is a clear choice at this election: five more years of poverty, inequality and homelessness under the Tories, or a Labour government that will end food bank Britain and bring about real change.

In 2017, the Broxtowe seat was held by then Conservative MP Anna Soubry with a small majority. After leaving the Tories to join what became The Independent Group for Change, Soubry’s contesting the seat in the upcoming general election potentially splitting the Tory vote. With just 863 votes between the Tories and Labour in 2017 – this seat could be a Labour gain.

So let’s hope Labour wins Broxtowe on the 12 December. Keeping Henry’s ‘opinion’ out of Westminster is vital. And this will also help form a Labour government and rid the UK of Universal Credit along with the blatant ignorance of the Tories on poverty issues. We can do this.