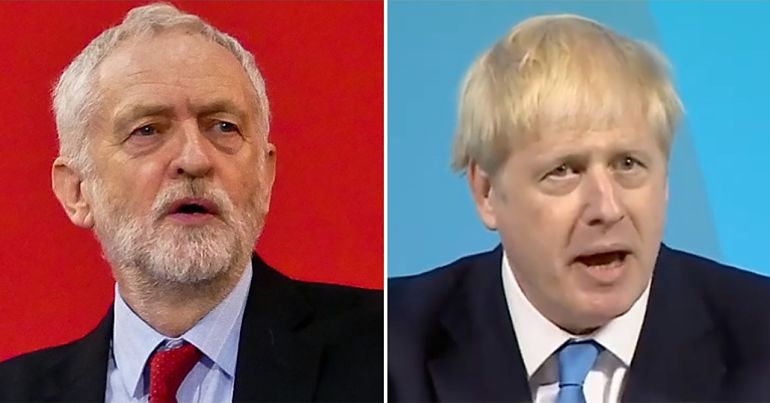 Labour’s policies, as outlined in its 2019 general election manifesto, are truly transformative. And if Labour is elected to power the UK will see a semblance of socialism, together with a glimpse into what a society based on co-operation can be like.

To achieve that degree of change, we need a revolution. But given the right circumstances, that can be achieved via the ballot box.

For it’s now very clear: you can vote for the Sheriff of Nottingham (Boris Johnson) and his equally privileged sidekick Guy of Gisbourne (Dominic Cummings).

Or you can vote for Robin Hood. 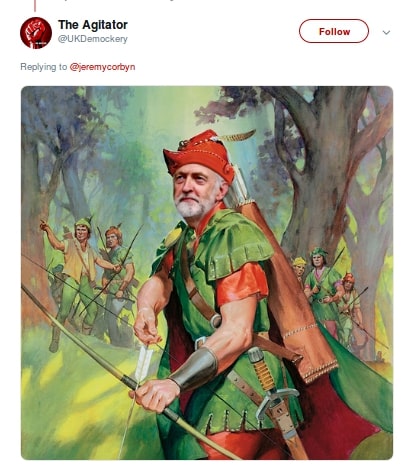 As Jeremy Corbyn makes clear, Labour’s plan, as outlined in its manifesto, is about hope:

In the foreword to the manifesto Corbyn outlines his vision:

This election will shape our country for a generation. It is your opportunity to transform our country, so that it works not just for a few, but for all of us. …

It’s time to take on the vested interests holding people back. The last decade has seen a wealth grab by a privileged few, supported by the Conservatives, at the expense of the majority. The big polluters, financial speculators and corporate tax-dodgers have had a free ride for too long.

Labour will build a fairer Britain that cares for all, where wealth and power are shared.

Meanwhile, although poverty in the UK is at critical levels, Corbyn says:

I am not prepared to continue to see more families without a proper home and more people queuing at food banks or sleeping rough on the streets.

I am not prepared to put up with communities blighted by lack of investment, endless cuts to vital services and millions struggling to make ends meet, while tax cuts are handed to the richest.

We can do better than this. How can it be right that in the fifth richest country in the world, people’s living standards are going backwards and life expectancy is stalling?

So how will change happen?

Corbyn goes on to explain how Labour will change our society for the better.

For example, Labour will launch the “largest-scale investment programme in modern times” to fund the jobs and industries of the future. It will also launch what it calls a Green Industrial Revolution, to tackle the climate emergency. It will do this by “shifting to renewable energy, investing in rail and electric cars, and making housing energy- efficient”. In addition, Labour will bring back rail, mail, water and energy into public ownership, to end what it calls the great privatisation rip-off. Full-fibre broadband will also be free to everyone across the UK.

Furthermore, the Living Wage will increase to £10 an hour, zero-hour contracts will be abolished and Labour will end the need for foodbanks.

But that’s not all

Labour also pledges to create a National Education Service: “from Sure Start centres to top-quality early years education; well-funded schools with lower class sizes to free university tuition with no fees, and free lifelong learning”. Furthermore, Labour will guarantee the NHS receives all the funding it needs, end NHS privatisation and ensure prescriptions and basic dentistry are free for all. Similarly, all personal care for older people will be free.

And everything in the manifesto is fully costed. Moreover, 163 leading economists have given their full backing to Labour’s ambitious plans.

Taking from the very rich and giving to the poor

These policies will help restore our faith in ourselves as we rediscover that life need not be a day-to-day struggle. In simple terms, a Labour government means that an average family will save £6,700 per year from reduced bills alone:

And that’s not taking into account that there will be no tax rises unless a person earns more than £80,000 a year.

Labour’s solution to the Brexit divide is to seek a deal that would be put to the people in a confirmatory vote (with an option to leave). The deal would include a UK-wide customs union; alignment with the single market; protection of workers’ rights, consumer rights, and environmental protections. It also means continued participation in EU research, education and funding programmes, alongside a commitment to ongoing security arrangements.

And that means Labour’s version of Brexit:

protects jobs, rights and the environment, avoids a hard border in Northern Ireland and protects the Good Friday Agreement and the peace process.

Corbyn told a BBC audience that he wants to bring the nation together over Brexit, and that:

I will adopt, as Prime Minister if I am at the time, a neutral stance so I can credibly carry out the results of that to bring our communities and country together, rather than continuing an endless debate about the EU and Brexit.

Boris Johnson’s version of Brexit can only be described as a complete con. For his flawed ‘deal’ will likely see not just months but years of further negotiations over trade. Or he will opt for a disastrous no-deal if those negotiations fail.

As for the Conservative manifesto, it fails in a number of key areas. For example, new nurses will get a maintenance grant and all students’ tuition fees will likely be frozen. Yet, in contrast, Labour will abolish tuition fees and bring back maintenance grants for all students and nurses will receive a bursary. Under the Tories, the dreaded Universal Credit will also stay, while Labour will scrap it.

Also, Johnson has promised tax cuts, but they are only for the richest people and corporations. That’s not that surprising, given that under the Tories working people in the UK are still regarded as serfs by a billionaire and oligarch-backed elite.

All in all, Johnson’s offerings would likely result in a Brexit-ruined economy and more years of austerity. Or you can help ensure he becomes one of the shortest-lived prime ministers in British history.

So, it’s either the Sheriff of Nottingham or Robin Hood.

And if it’s the latter, then Christmas will have come early.