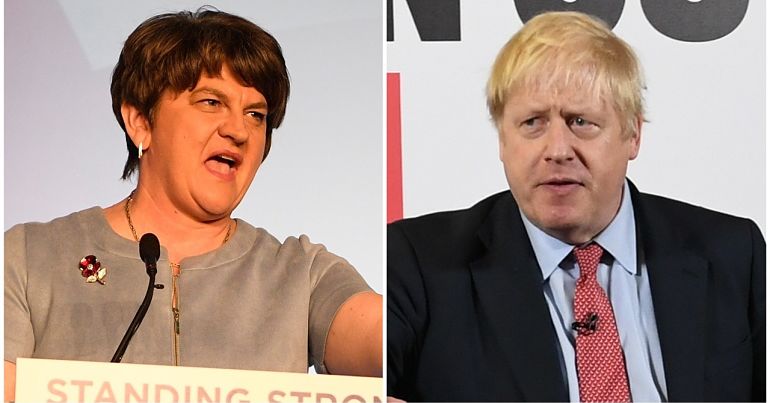 Boris Johnson has been accused of breaking his word over his commitment to protect the union between Great Britain and the north of Ireland by the leader of the Democratic Unionist Party.

As the prime minister faced fresh questions over trade within the UK after Brexit, Arlene Foster said government officials had told her there would need to be checks.

Asked on BBC Radio 4’s Today programme about the sense of some in the unionist community that Johnson’s deal was a “betrayal”, she said: “I think it is right for the leadership of unionism in Northern Ireland to try to work with the prime minister of the day to get the best deal for Northern Ireland.

“We will always do that. We will continue to do that. I think it says more about the person who broke their word than me and the leadership of the… Democratic Unionist Party.”

She said the DUP had been told by HM Revenue and Customs (HMRC) officials before the PM announced his deal that there would be checks between the mainland and the north of Ireland.

“And all of that leads me to say that we need to – after this election is over, and I’m not prejudging the election in any one way, every vote will count – but what is important is that we have a strong team of DUP MPs back in Westminster to speak up for Northern Ireland.”

Foster has kept a low profile in the election campaign thus far, and her intervention will be seen by some as an attempt to highlight a need for the DUP’s role in holding sway in the event of a hung parliament.

Her comments came after Labour released a leaked treasury report last week that concluded customs checks and possibly even tariffs could be required on goods travelling in both directions between the north of Ireland and Great Britain.

But Johnson told Sky News’ Sophy Ridge On Sunday programme over the weekend that the report was “wrong” and added that the six counties would have “unfettered access” to the UK market.

With just a few days to go until polls open, the PM is embarking on a blitz of Labour’s heartlands in a bid to convince Leave voters that Jeremy Corbyn’s Brexit position is akin to a “great betrayal”, and will say there are just “three days to get Brexit done”.

He has consistently vowed to take the UK out of the EU by 31 January and then finalise a trade deal with Brussels within 11 months to meet the transition period deadline.

Arrangements would also need to be signed off that allow the north of Ireland to continue to follow Brussels and Dublin rules on the trade of goods to ensure there is no hard border.

But a Whitehall report seen by the Financial Times highlights the difficulty involved for the government in bringing in the infrastructure in time for the UK to leave when the PM has pledged.

A Department for Exiting the European Union document, according to the FT, states that: “Delivery of the required infrastructure, associated systems, and staffing to implement the requirements of the (Northern Ireland) protocol by December 2020 represents a major strategic, political and operational challenge.”

Elsewhere on the campaign trail, shadow chancellor John McDonnell will set out his party’s main priorities for the first 100 days of a Labour government.

He will say that the first priority for the treasury under Labour will be ending the Conservatives’ programme of cuts to public spending and social security.

“In our first hundred days we will start the process of bringing water and energy into public ownership,” he will say.

“We’ll set up boards to run them made up of you, the customer, and you, the worker, as well as representatives from local councils, metro mayors and others.

“We’ll make sure decisions are taken locally by those who understand the services – those who use them and deliver them. Meetings will be public and streamed online with new transparency regulations set higher than ever before.

“So you can see if your road is being dug up, why, and for how long. And we’ll create new People’s Assemblies to hold these boards to account and give everyone the option of participating in how their utilities are run.”