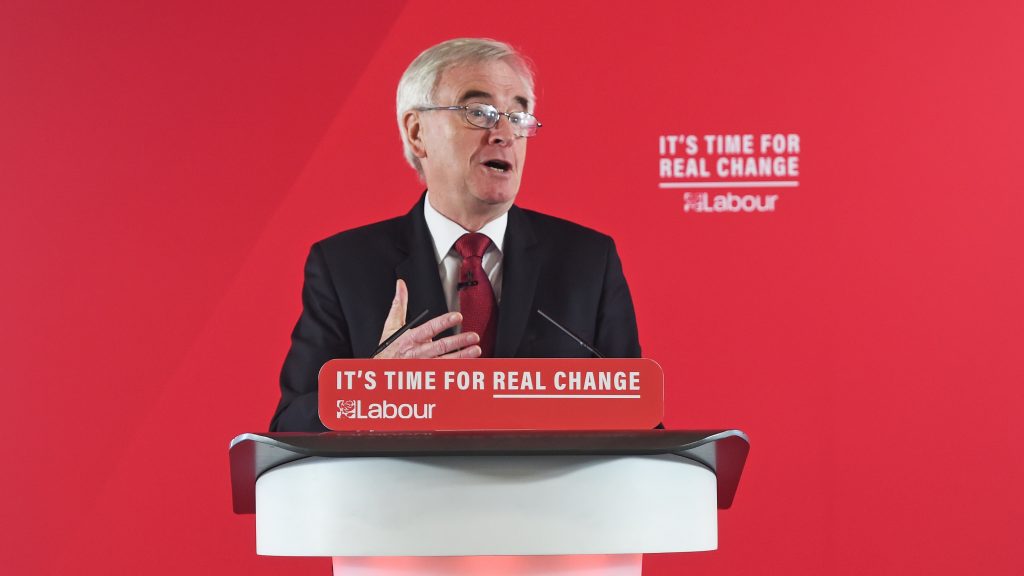 The Labour Party has promised a February budget that will end austerity “once and for all”.

Shadow chancellor John McDonnell said he will deliver a budget on 5 February which will save the NHS, rebuild public services, and introduce a Real Living Wage of £10 per hour for all workers over 16.

McDonnell said his budget will also put more money into an emergency package of reforms to Universal Credit while Labour designs a replacement social security system.

The shadow chancellor said a Labour government will provide funding for a 5% pay rise for all public sector workers, establish a Waspi compensation scheme and bring forward legislation to scrap tuition fees.

In the first 100 days of a Labour government, the process of bringing water and energy into public ownership will begin, with boards set up to run the utilities.

In a speech in London, McDonnell said: “I can tell you today that my first act as a chancellor will be to write to the Office for Budget Responsibility and we’ll ask them to begin their preparations for my first budget which will be given on February 5, the date when almost 10 years of cuts will come to an end.”

He said when it happens it will be down to the millions who stood up against what “has been happening in society”.

McDonnell said people’s potential is being wasted in too many parts of the country, adding: “Good jobs and whole industries that were once the pride of our country have been lost and replaced with dreary, exploitative, insecure and low-paid jobs, or in some cases no jobs at all. It’s no wonder people feel disillusioned in politicians and politics.

“As our manifesto makes clear, turning these two things around will be our number one priority in government.”

He said a National Transformation Unit will be set up immediately, providing the initial finance for a new National Investment Bank, regional development banks and Post Bank.

“We’ve already started our meetings with the Treasury officials, they are working up plans and getting ready to implement this as soon as we go into power on Friday morning,” McDonnell said.

“Central among those institutions will be publicly owned and democratically run utilities, because when Labour put money in your pockets, we will also put power back in your hands.”

McDonnell said: “Thanks to privatisation and outsourcing and offshoring and similar initiatives pursued by the Thatcher government and Conservative governments since in the name of market efficiency, more and more aspects of our lives are shaped by remote corporate interests over which we have little or no control.

“So the second key priority for me and a Labour government will be to change that.”

He added: “In our first 100 days we will start the processes of bringing water and energy into public ownership. We’ll set up boards to run these utilities made up of you, the customer, and you the people, the workers, as well as representatives from local councils, metro mayors and others.

“We’ll make sure that decisions are taken locally by those who understand the services – those who use them and those who deliver them.”

In his speech, McDonnell also made reference to “attacks” on his party, saying: “There will always be those at the top who will do anything to stop us – and we’ve seen it, character assassinations, lies and smears taken I believe to a new level in British politics.

“The more people we convince on the doorstep, the more they ramp up their attacks because those who’ve had it good for so long are terrified, terrified of losing control.

“They think – and I quote the Prime Minister – that working people are drunk and criminal, they hate the idea you might dream of a better life.”