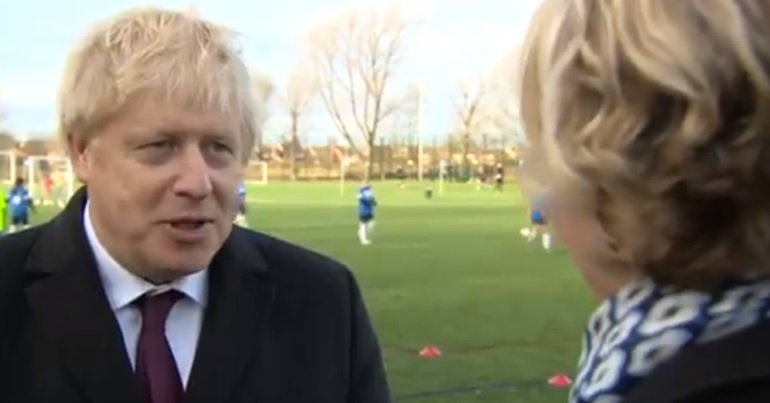 ITV‘s Hannah Miller met Boris Johnson on 7 December. And her reporting on his visit to the North West of England surely captures why this past weekend really must be Johnson’s last as prime minister.

Miller excelled during an interview with Johnson on 7 December. By holding him and his party to account, she really made him squirm.

She first quoted a letter from the Seashell Trust, a charity which supports “children and young adults with profound disabilities and additional communication needs”. This letter claimed children’s services were at ‘breaking point’. And Miller asked:

Will you admit that the cuts the Conservative government made to children’s services have been devastating and dangerous to some vulnerable children?

Johnson simply responded by reciting a spending pledge, which Miller stressed “doesn’t go anywhere near what’s been cut in the last ten years”. He then spoke about supporting local councils, leading Miller to say:

but councils are facing a £3bn funding gap for children’s services by 2025. When will councils get the money that they need to help vulnerable children?

And her well-informed scrutiny continued along the same lines, with Johnson clearly struggling to keep up:

Did an interview with Boris Johnson in Cheadle this morning. The @seashelltrust previously signed a letter saying children's services are at 'breaking point' – so I asked about that. Not sure we really got anywhere to be honest, but here it is @GranadaReports: pic.twitter.com/8ZEi5TPwxq

Johnson also tried to defend his weak promises by suggesting Britain had to prioritise a “strong and growing economy”. The suggestion here was that any bigger pledges would not be economically sensible. But the words of economists seem to undermine that argument. Because as award-winning economist Simon Wren-Lewis recently said:

The economy under a Conservative chancellor since 2010 has been weak, not strong.

Other economists have also highlighted the Tories’ dismal economic record while backing the Labour Party’s 2019 manifesto. Award-winning economist Ann Pettifor, for example, has called the latter “just common-sense economics”. And 163 economists proudly signed an open letter on 25 November saying the “UK economy needs reform” and that Labour “deserves to form the next government” because it has “serious proposals for dealing with” Britain’s “deep problems”. The Tory manifesto, meanwhile, just offers more stagnation and policies that only really benefit billionaires.

Johnson is clearly afraid of media scrutiny. That’s why he has avoided numerous interviews and debates. But he also seems to fear the criticism of ordinary citizens. Because on several occasions, he’s apparently cancelled public events for fear of protesters holding him to account. And as Miller reported, he did the same thing on 7 December. Incoherent ramblings, embarrassing gaffes, and hospital boos seem to have made his campaign team fully aware of the need to control his public appearances as much as possible.

His political record isn’t anything to be proud of either. Because as an MP, he backed his party’s failed ideological austerity, which has been disastrous for the country – sparking a rise in poverty, foodbank usage, and widespread suffering for some of the most vulnerable people in Britain. At least 130,000 people have died as a result of just one Tory policy. As prime minister, meanwhile, he has formed a hard-right team which admires Margaret Thatcher and public-sector cuts. And he has failed to deal with his party’s (and his own) appalling record of bigotry.

All of the above should give voters the perfect reason to ensure he doesn’t serve one more weekend as prime minister.