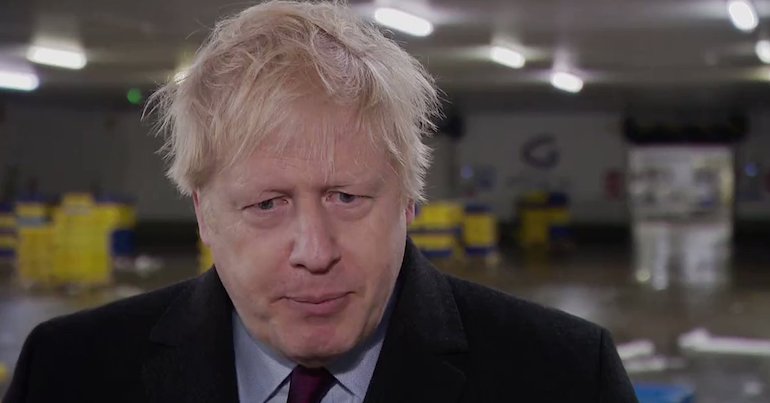 On 9 December, ITV journalist Joe Pike confronted Boris Johnson with an image that has shocked the nation. Johnson’s reaction was, even by his standards, appalling. In fact, this should be the defining moment that costs him the election.

Pike tried to show Johnson an image of four-year-old Jack Williment-Barr. As the Yorkshire Evening Post reported, he was forced to sleep on the floor of Leeds General Infirmary A&E because there weren’t enough beds.

His mother shared a photo of Jack wearing an oxygen mask and trying to sleep on a pile of coats. The Mirror picked this up to run as a front-page story:

This is the image Pike tried to show Johnson, saying:

This is a four-year-old boy, prime minister, suspected of pneumonia, forced to lie on the floor on a pile of coats.

Refusing to look at the picture, Johnson gave a withering faux apology and returned to his one and only script of this election. A mish-mash of “investment” and now debunked figures about increased police and hospital numbers. Pike pushed further asking:

I’m talking about this boy… How do you feel looking at that photo?

Still refusing, Johnson said he ‘hadn’t had a chance’ and would “study it” later. Pike asked him to “look at it now”. He wouldn’t. Instead, he took Pike’s phone and put it in his pocket. Pike pointed this out and said:

His [Jack’s] mother says the NHS is in crisis. What’s your response?

Johnson finally looked. But it was too little too late.

Tried to show @BorisJohnson the picture of Jack Williment-Barr. The 4-year-old with suspected pneumonia forced to lie on a pile of coats on the floor of a Leeds hospital.

The PM grabbed my phone and put it in his pocket: @itvcalendar | #GE19 pic.twitter.com/hv9mk4xrNJ

It only took Jeremy Corbyn four words to sum up Johnson:

Not fit to govern

This moment defines the entire legacy of the past nine years of Conservative-led governments. Our NHS is at breaking point. As Jack’s mother told the Yorkshire Evening Post, although hospital staff were “all as helpful as they could be”:

The NHS is in crisis…

He spent eight and a half hours in A&E, more than twice the required waiting time which is normally four hours.

Jack wasn’t provided with a bed on a ward until 13 and a half hours later.

Yet when confronted with an image of this crisis, the man who claims he’s fit to govern wouldn’t even look. That should tell voters everything they need to know on 12 December.