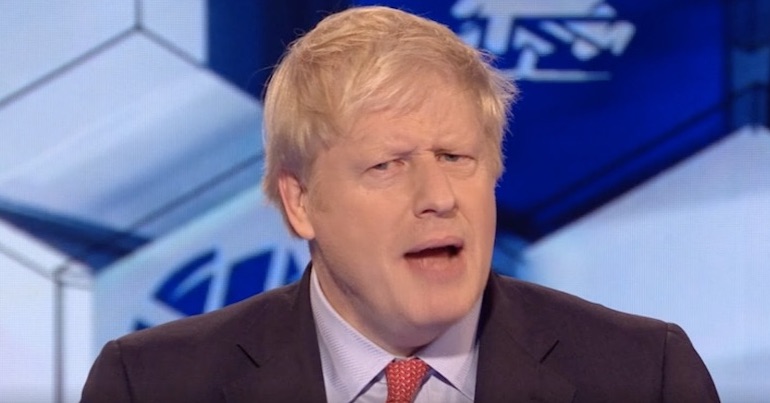 On 9 December, Boris Johnson showed once again that he really doesn’t care about the climate emergency.

In a last-minute effort to woo voters, Johnson visited Labour strongholds in the north of England. But following a trip to a fish market in Grimsby, he took a private jet from Doncaster to Teeside. This is an 84-mile trip. As Metro reported, this journey would only take just over an hour and a half by either train or road.

Any air travel is a major contributing factor to devastating levels of CO2 emissions. And crucially:

While many issues are important to voters, this general election has been dubbed by some as “the climate election”. And Johnson’s jet-set trip followed shortly after he avoided a Channel 4 News leaders’ debate on the climate crisis. Furthermore, as The Canary‘s Tracy Keeling reported:

What the next UK prime minister does to tackle the environmental crisis facing our planet is critical. In 2018, the UN told the world that we have 12 years left to make changes and choices that will bring us back from the brink of catastrophic climate change.

Boris Johnson generally as concerned about the climate crisis as Donald Trump. Not at all https://t.co/8puOjKU8ni

The UK is leading the way on tackling climate change… We must all play a part in protecting the planet for future generations.

The Conservative manifesto, meanwhile, pledged to:

It also promises a Conservative government would “support clean transport to ensure clean air, as well as setting strict new laws on air quality”. However, a fracking lobbyist did write this manifesto.

As the Mirror reported, Greenpeace UK’s chief scientist Doug Parr said Johnson “should be leading by example” and this trip “makes his lack of ambition for tackling the issue glaringly obvious”. Friends of the Earth climate campaigner Aaron Kiely said:

Nobody, including the prime minister, can get away from the fact that fewer planes in the sky will help to fix the climate crisis.

Labour, meanwhile, has put the environment at the heart of its manifesto. Labour’s Green Industrial Revolution will deliver clean, affordable energy and substantially reduce carbon emissions by the 2030s. Its plans to reinvest in public transport are also a vital step towards creating “environmental sustainability”.

I fly as little as I can now, I take trains wherever I can all the time… I do think [as prime minister] an example has to be set… the biggest emmissions are actually aircraft.

Johnson’s recent flight proves that no matter what he says, he can’t be trusted with anything. From empty promises about the future of our country to the survival of the planet, what he says and what he does – and will do – are worlds apart. Actions speak louder than words, and he clearly doesn’t give a shit.