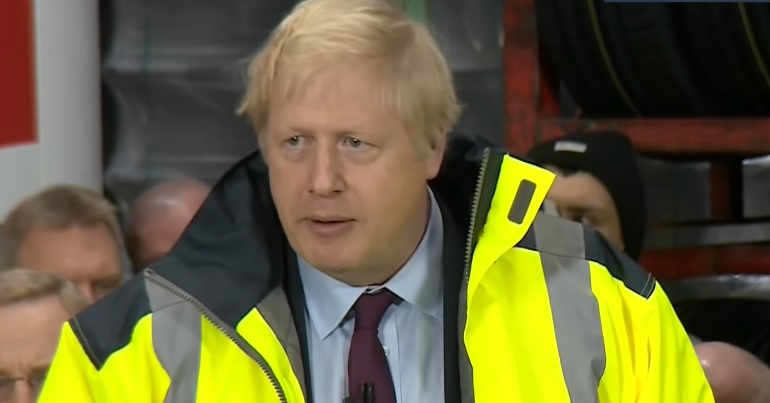 Boris Johnson’s main argument in the general election is that he is the man to “get Brexit done”. He’s hammered home to voters that he has an “oven-ready” deal that can be done and dusted quickly if they make him PM.

But Johnson’s own Brexit department doesn’t appear to share his faith. In fact, according to the Financial Times, it has real fears that the deal presents “a major strategic, political and operational challenge”.

The Financial Times has seen extracts of a document from the Department for Exiting the EU (DExEU) which it circulated to officials last week. Referring to Johnson’s deal, which he’s promising to get through parliament by the end of January 2020, it says:

Delivery of the required infrastructure, associated systems, and staffing to implement the requirements of the protocol by December 2020 represents a major strategic, political and operational challenge.

The protocol it raises relates to the north of Ireland and dictates what customs arrangements need to be in place once the UK leaves the EU. These arrangements need to be in place by December 2020, when Johnson is promising that the transition period will end. Johnson claims he can negotiate a new trade deal with the EU by this time. But the DExEU document suggests officials aren’t even sure they can implement the terms of the Withdrawal Agreement by December 2020. The Financial Times reports it raises the potential:

Officials also note that “delivery on the ground would need to commence before we know the outcome of [trade deal] negotiations”. In other words, they’d be flying blind.

Not what it says on the tin

The revelations in the Financial Times follow the release of documents by Labour on 6 December that question Johnson’s claims about his deal.

He says it will not necessitate a customs border between Great Britain and the north of Ireland. But the government report revealed by Labour shows that checks and tariffs will likely be part of any post-Brexit society under Johnson’s deal. Jeremy Corbyn said that the government “cannot rule out” checks for goods travelling from the north of Ireland to Great Britain. Meanwhile, regarding trade from the UK to the north of Ireland, the Labour leader asserted those checks will apply plus potentially “damaging tariffs”. According to the Labour leader, the documents state that Johnson’s deal:

Johnson has a lot resting on his deal looking like a sewn-up job that doesn’t separate the north of Ireland from the rest of the UK. Both of these ideas have now been flattened. Nonetheless, the government is still repeating this claim. A Conservative spokesperson told the Financial Times:

Our new deal with the EU takes the whole of the UK, including Northern Ireland, out of the EU.

A Conservative majority government will implement this deal and agree a trade agreement next year. In doing so we will strengthen our union and we will not extend the implementation period beyond December 2020.

The party may think that repeating this line, even in the face of conflicting evidence, will convince people it’s true. Let’s hope it’s wrong.