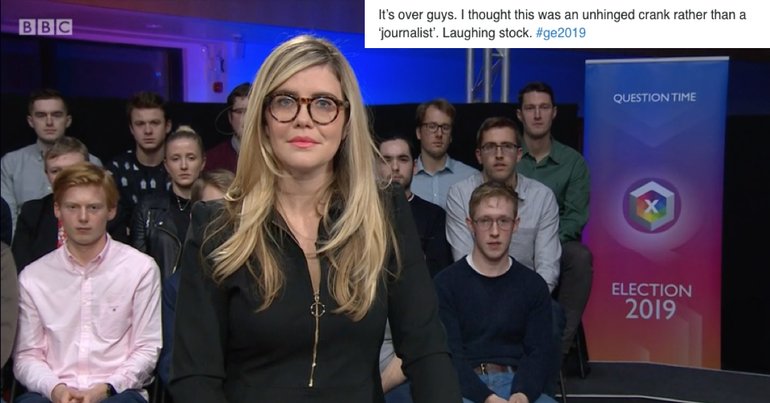 BBC host Emma Barnett is being slammed for asking the most stupid question of the general election. And in an election where the media has failed voters so abysmally, that’s quite an achievement.

During a BBC Question Time special on 9 December, Labour shadow education secretary Angela Rayner addressed the climate crisis. Given the existential threat to life on earth, it’s perhaps the most pressing issue around the globe. Decades of work by scientists and activists is culminating in the mass movements surrounding Greta Thunberg and Extinction Rebellion. And urgent cooperation is required to prevent the crisis deepening.

Global carbon emissions must drop by 45% by 2030 to prevent the average temperature rising 1.5 degrees higher than pre-industrial measures, according to the IPCC. Kelly Levin of the World Resources Institute describes what would happen over the next decade if we fail:

Rayner was able to discuss Labour’s Green New Deal to tackle the crisis, described as one of the most radical programmes in the world. For the first time, one of the UK’s two main parties is offering a more comprehensive environmental programme than the Green party.

But Barnett interrupted with a question she felt was more urgent, asking Rayner:

Would you nationalise sausages?

During an election in which the BBC has served as a PR service for the Conservative Party, this was a new low. Question Time was once considered the flagship political programme in Britain. But in recent years, it’s become more like a late night edition of Jeremy Kyle. And yet somehow, Barnett made it worse. Viewers could scarcely believe what they were seeing.

Nothing really could sum up the BBC's election coverage better than Angela Rayner talking about the importance of climate change and being interrupted to ask if she'd "nationalise sausages". https://t.co/0SNVk3DSWb

It’s over guys. I thought this was an unhinged crank rather than a ‘journalist’. Laughing stock. #ge2019 pic.twitter.com/Bf9QbY3PM1

This is primetime BBC election coverage and we’ve got Emma Barnett asking a question like this. Clear to see where her/the BBC agenda is at. A fucking disgrace pic.twitter.com/OwDevRdskv

And it’s the second time in as many weeks that Barnett has come under fire. During an interview with Labour MP Lloyd Russell-Moyle, Barnett had her infamous ‘will no one think of the poor billionaires?’ moment. In a conversation about the UK’s gross inequality, Barnett seemed more concerned about those at the top of the wealth pyramid.

Emma Barnett: “Why won’t *SOMEONE* think of the poor billionaires 😢😩”

Imagine being more outraged at not wanting billionaires to exist than child poverty, makes me wanna nuke myself into fucking orbit. https://t.co/gbuXPELzc9

Boris Johnson is already implying he’ll gut the BBC if he wins December 12. And after its woeful behaviour during this election, the BBC will have a tough time finding allies willing to fight for it. Either way, it seems licence fee payers would appreciate less Emma Barnett.