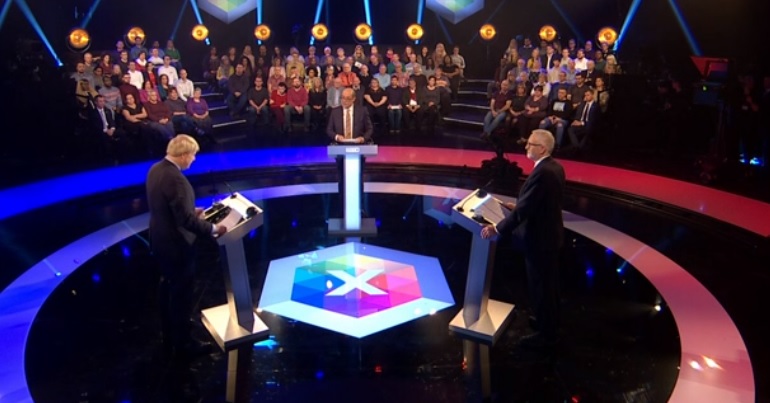 The BBC held the last leadership debate of the election on 6 December. Titled “The Prime Ministerial Debate”, it featured audience members putting a series of questions to Jeremy Corbyn and Boris Johnson, allowing them to make the case for being Britain’s next leader.

The party leaders answered questions on the NHS, Brexit, racism, trust, and other things. But arguably the most pressing issue facing the UK and, indeed, the world was almost entirely missing from the debate. None of the questions raised the climate crisis.

What the next UK prime minister does to tackle the environmental crisis facing our planet is critical. In 2018, the UN told the world that we have 12 years left to make changes and choices that will bring us back from the brink of catastrophic climate change. We’re now on the cusp of 2020, so that’s 10 years left.

Johnson, in particular, needs to be pressed on the issue. Because he recently ducked Channel 4‘s debate on the crisis.

He needs to answer for his party’s abysmal record on the climate and on why his government’s rhetoric and promises don’t add up with the actions it’s taking. Particularly, he needs to explain how he can square his proposed trade deal with the US with healing the planet when the US has categorically ruled out greenhouse gas emissions even being mentioned in the deal.

If anyone presumed the BBC debate would provide a platform for Johnson to be cornered on these glaring inconsistencies, they were sadly mistaken:

Can't believe they haven't discussed climate change. None of this stuff matters if we don't have a planet #BBCLeadersDebate #BBCdebate

In a competitive field, the single greatest instance of BBC unprofessionalism over the course of the election campaign is this:

Not one single question on the climate emergency in the #BBCLeadersDebate

I believe the only time climate breakdown was mentioned was in Corbyn’s closing remarks.

Disgraceful that the BBC didn’t ask a question on it — particularly after Johnson refused to turn up to Channel 4’s climate debate #BBCLeadersDebate https://t.co/6CXWshmT5K

Disappointed that despite record high public concern and only 10 years to get our shit together, there was no question on the climate emergency #BBCLeadersDebate

The Canary contacted the BBC for comment but none was received by the time of publication.

Our world has warmed by 1C already due to excessive exploitation of the planet’s resources. What is happening in Australia right now shows the consequences of that warming. Wildfires are so large and uncontrollable that people can only pray for rain to save them from the destruction. The UN says we must not go over 1.5C, and laid out the route to ensure we stay within that limit in 2018. It said:

We have presented governments with pretty hard choices. We have pointed out the enormous benefits of keeping to 1.5C, and also the unprecedented shift in energy systems and transport that would be needed to achieve that. We show it can be done within laws of physics and chemistry. Then the final tick box is political will. We cannot answer that. Only our audience can – and that is the governments that receive it.

The UN has continued to push governments for action since then.

In short, any future UK prime minister needs to prioritise tackling the climate crisis. That’s what thousands of people who have taken to the streets in the UK have been calling for. And wannabe PMs sure as hell need to be asked about both their records on the climate and plans for the future. Not confronting leaders on the issue does a great disservice to both citizens, the planet and, indeed, life itself.

That’s because Labour has put the environment at the heart of its manifesto. It’s offering a Green Industrial Revolution that will deliver clean, affordable energy, substantially reduce carbon emissions by the 2030s, and restore our vital ecosystem through investing in a green economy that will create thousands of jobs.

Of course, without a question focused on the climate, apart from raising it in his closing statement, Corbyn didn’t have much of a chance to share these plans with viewers of the BBC debate. That’s a great shame. Because they’re exactly the sort of policies this country, and the world, needs to tackle the climate crisis.