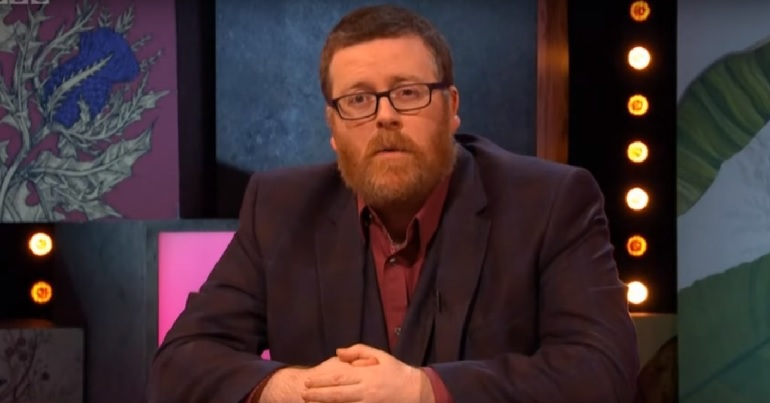 Comedian Frankie Boyle has just written a cutting takedown of the mainstream media’s appalling election bias. And he says it’s a problem we seriously “need to address”.

The art of media bias

Writing in the Guardian, Boyle stresses that:

Labour has been monstered in the media throughout the campaign, and largely been judged by different standards than the Conservatives. Even the gold standard of scrutiny that Johnson dodged was just being interviewed by his former boss at the Spectator.

Indeed, while Labour’s Jeremy Corbyn has been attending debates and interviews, Tory leader Boris Johnson has been avoiding scrutiny as much as possible. And while Britain’s billionaire media dominates the UK’s media environment with its clear anti-Labour position, even the public broadcaster (the BBC) has faced fierce criticism for its alleged pro-Tory bias. In particular, the smearing of Labour’s veteran anti-racist leader has been endless (despite his party’s very strong record on stamping out racism), while there’s barely been a mention of the Tories’ appalling record on racism.

Boyle continues by highlighting that:

The Tories calling Corbyn a communist and a threat to national security after handing nuclear power plants to the Chinese is a bit like getting a bollocking off Charles Manson for putting down slug pellets.

Corbyn has consistently opposed the disastrous regime-change wars that have arguably been the biggest threat to Britain’s national security. His party’s manifesto, meanwhile, has the backing of countless economists; and one award-winning economist has stressed that it’s Tory chancellors since 2010 that have been “weak” on the economy. Corbyn’s business stance, meanwhile, is far from being ‘communist‘. He’s just asking billionaires to pay a bit more tax for the good of society as a whole.

We need to address this urgently

Boyle also insists on the need for less billionaire dominance in the media, saying:

Media plurality is an issue we need to address in this country: the alternative is living in a timeline where, because Corbyn has wonky glasses, in a couple of years you’ll be living in a tent city outside an Amazon warehouse trying to GoFund a tonsillectomy.

And while he’s hardly been an avid supporter of Labour, he continues by stressing:

I won’t be voting Tory on Thursday, for much the same reasons that I won’t be spending the day kicking children and pensioners into traffic.

The toxic alliance between the Tories and the billionaire media needs to change. It has led to social and economic devastation over the last decade. Continued Tory rule, meanwhile, would likely be as dystopian as Boyle imagines it would be. That’s why we need to spread the message. Because the election on 12 December is a vital opportunity to change Britain’s direction for the better. And we must take it.