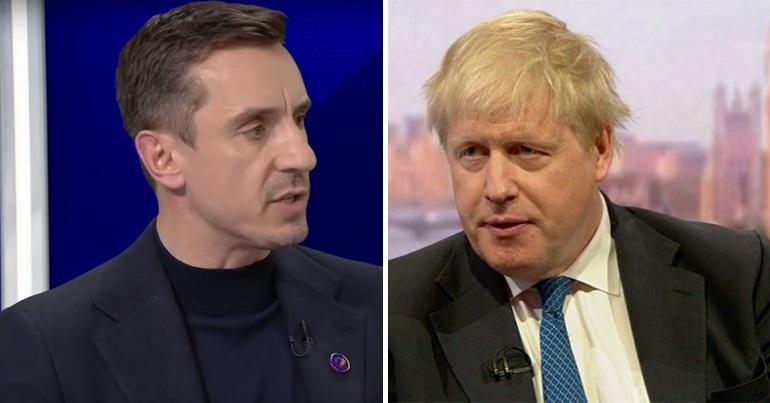 As the billionaire media’s longstanding anti-Labour propaganda continues, football institutions are standing up to racism from the Conservative Party and its supporters. And with the 2019 election just days away, this could hardly come at a more important time.

It fuels it all the time. And essentially, it’s something that’s got worse in the last three years in this country

Johnson and his party have a horrific record of bigotry of all kinds. They are also facing an Islamophobia crisis at the moment, along with increasing allegations of antisemitism. Here are just some of the most famous examples of Johnson’s own chauvinism:

"One person said all these?" pic.twitter.com/N6nJ0NMYRA

Johnson doesn’t just slip up, though. His whole career essentially seems to be a long list of insults against women, ethnic minority groups, religious minority groups, the LGBTQIA+ community, and working-class people. And that’s why many people were grateful to Neville for speaking out:

Well done @GNev2 for your comments at the end of today's game. You'll probably face a backlash for bringing politics into football punditry but you're right to point out that people like Johnson are setting the tone and helping to legitimise racism.

Johnson’s dog-whistle racism being challenged more sturdily on Sky Sports Saturday Night Football than in 99% of UK political journalism, this election has been a rollercoaster ride

Neville, meanwhile, wasn’t the only figure in football to have called Johnson out recently:

The world is finally waking up to the bigotry of a @Conservatives leader hoping to scaremonger and lie his way back into Downing Street."https://t.co/kb23hJSDfU

The hard-right billionaire media are in on it too

The Conservative Party is in bed with Britain’s billionaires, and they back it to the hilt as a result. They dominate the UK’s media environment, pushing their clear anti-Labour position far and wide with little interest in balance. Even the supposedly impartial BBC has faced fierce criticism for its alleged anti-Labour bias.

The papers of billionaire tax avoider Rupert Murdoch, however, are among the main backers of the elitist Tory project. And the Sun in particular, which reaches more people than any other paper, represents the worst of the worst in terms of racism. Satirical artist Darren Cullen has slammed the Sun for its “long history of demonising communities… thought to have some kind of latent support for terrorism”. In the past, it targeted Irish communities, and it later moved on to Muslims. One column, for example, described refugees as “cockroaches”.

The European Commission Against Racism and Intolerance (ECRI) previously accused the Sun and other hard-right outlets of fuelling negative “stereotypes” amid rising numbers of hate crimes. ECRI chair Christian Ahlund said in 2016:

Football fans, meanwhile, have long boycotted the Sun for its disgusting coverage of the 1989 Hillsborough disaster. And Liverpool FC in particular has a ban on Sun employees reporting from its stadium. In fact, reports on 7 December suggested that the team could be sacrificing a chance to host an England game because of its ongoing boycott.

Ace day for football, Liverpool and Everton fans holding up Labour banners, Liverpool refusing to readmit the S*n even to get an England game and the Nev denouncing Johnson over racism.
4-0.

Stand up to the toxic elitist alliance

It’s great to see football institutions calling out bigotry. But it’s not just the putrid alliance between Johnson and hard-right billionaire rags that we need to resist. Because there’s also evidence that sections of the “military/intelligence establishment” are also part of that alliance:

Another story of "ex-military veterans in their spare time" led by "ex-SAS officer" demonising Corbyn as threat to UK, by the hilarious T.Newton-Dunn in the S*n. @DCKennard & @DeclassifiedUK just documented 34 similar media stories: it's now closer to 40. https://t.co/XATlZIX3d2

Officials in the UK military/intelligence establishment are working with the corporate media to stop Corbyn becoming prime minister. Here’s the evidence. New research from Declassified UK by @DCKennard. https://t.co/2qyFl30OWf

On 12 December, voters have a real chance to defeat this toxic network of bigotry. And it’s a chance we need to take with both hands.