There was an absolutely scandalous moment in Boris Johnson's LBC interview. It wasn't throatgate. - Canary 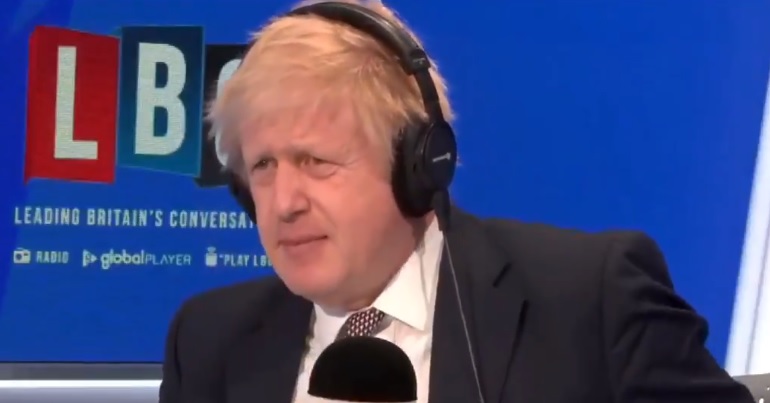 Boris Johnson was captured on camera drawing his hand across his throat during an LBC interview on 29 November. Dubbed throatgate, people suspected the PM was gesturing to host Nick Ferrari to move the questioning on from the difficult subject of social care:

WTF is @BorisJohnson doing here in response to his non-answers on @LBC? Is he saying cut the interview?!😱 It's not going his way, he's obviously sounding an idiot and is then looking to others for a way out! Piss 'palling. #ConservativeShitShow #BorisJohnsonIsAMelt #BorisonLBC pic.twitter.com/VKOlaRlhSc

That scandal turned out to be bogus. But Johnson’s response to a question from a single mother was scandalous too – and voters shouldn’t let him forget it.

A single mother phoned into LBC to pose a question to Johnson. She said:

I don’t appreciate what you’ve said about single mothers and, by implication, my family. Why are you happy to criticise people like me, when you refuse to discuss your family?

The woman is referring to an old article where Johnson shared his views on single mothers and the men that impregnate them. As Ferrari explained:

On working class men, Mr Johnson, you said they’re likely to be drunk, criminal, aimless, feckless and hopeless, and perhaps claiming to suffer from low self esteem brought on by unemployment. On single mothers, [you said] they’re uppity, which is a word with its own issues and irresponsible.

And on their children, [you said] they’re ill-raised, ignorant, aggressive and illegitimate.

While Ferrari was reading that appalling list of comments out, Johnson winced and sighed. He then responded to the woman by saying he meant no “disrespect” to her or anyone. The PM did not, however, say that his comments were wrong or that he didn’t hold such views any more. Nor did he apologise to the mother for them. Instead, he blamed Labour for the fact they’d come to light, saying the revelations were:

another attempt by the Labour Party to distract from the fundamental issue at the heart of this election.

As with his previous racist comments, Johnson also said the words don’t mean what they sound like they mean. But the full article is available, and it reads exactly like it sounds: some silver-spooned toff hurling hurtful and callous insults at poorer people for having the audacity to procreate, with disdain levelled towards the men involved, the mothers left to raise children alone and, indeed, the children themselves:

Asked by Beth about his comments about single mums, the PM says you can always find words that "they can cull from the texts and twist them and distort them".

Here's the full article, you can decide for yourself if the PM's words have been taken out of context.

And where is the context that explains why you called working class men “drunk, criminal, aimless, feckless and hopeless”? #BorisOnLBC pic.twitter.com/XtX7c9IZVt

Meanwhile, he refused to talk about his own procreation:

Boris Johnson refuses to answer a question on how many children he has@NickFerrariLBC | #BorisOnLBC pic.twitter.com/ITHkyrL7c3

This is the general discourse we’re hearing right now.

Is this really what Britons are expected to settle for? Do we have to trade off our health, our tolerance, our dignity and our planet by electing a man who’s shown himself unwilling to properly protect any of those things in order to ‘get Brexit done’? Absolutely not. Because Labour is also offering people the chance to get Brexit done without threatening any of these things.

And people coming to that realisation is Johnson’s worst nightmare.