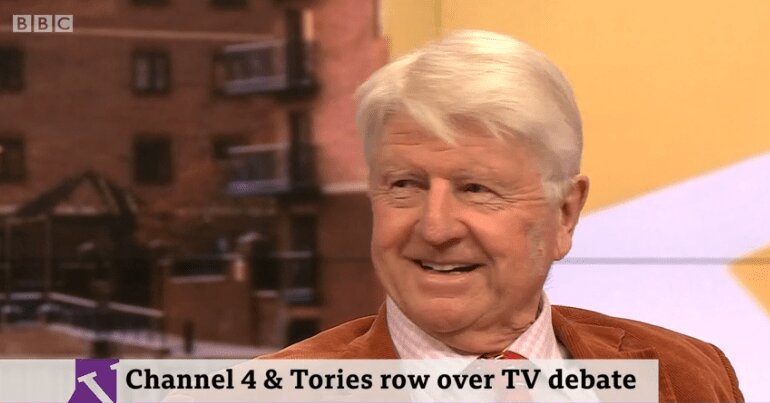 Boris Johnson’s dad suggested that the UK public lacks basic knowledge on the 29 November edition of BBC‘s Victoria Derbyshire. And his comments reveal what his family and the Conservative Party think about the British public.

Doesn’t have that “degree of literacy”

Responding to a comment from a viewer that branded his son “Pinocchio”, Stanley Johnson said:

Boris Johnson’s Dad was on Victoria Derbyshire today to defend his son. Instead, and with no prompting whatsoever, he revealed his utter disdain for the British public. Like father like son. They despise the working class. #DefendTheWorkingClass #GE2019 pic.twitter.com/Yni80sqTOF

Stanley Johnson : Spelling pinocchio requires a degree of literacy which I think the Great British public doesn't have

This is what the ruling classes think about us. Stop voting for this utter sham.

The prime minister wrote that working class men are “likely to be drunk, criminal, aimless, feckless and hopeless” in a 1995 magazine column. He also said that the children of single mothers are “ill-raised, ignorant, aggressive and illegitimate”. Johnson has refused to apologise for the remarks.

Appearing on Victoria Derbyshire this morning one of most surreal media things I’ve done. Stanley Johnson said the great British public wouldn’t understand a literary reference to Pinocchio & told me I couldn’t possibly imagine the no of commitments in a PM’s diary.

Boris Johnson was educated at Eton and is a descendant of King George II. And it goes beyond Boris Johnson’s words and upbringing. Austerity policies have also reflected the classism of the Johnson family and the Conservative Party as a whole. In 2015, it was reported that the UK’s richest 1,000 families increased their wealth by almost £500bn since the financial crash, while the majority of us have faced brutal austerity cuts.

Wonder where Boris Johnson gets it from…

On the BBC, the prime minister’s father then continued:

But there is literally a website called Boris Johnson Lies that documents pages and pages of outright lies from the Conservative leader. These span from claims about how many hospitals the Conservatives will build, to denying he said things he categorically has said to even lying about giving up drinking.

Unprompted, Stanley Johnson seemed to reveal his disdain for the people of Britain on the BBC. We deserve a hell of a lot better than this.