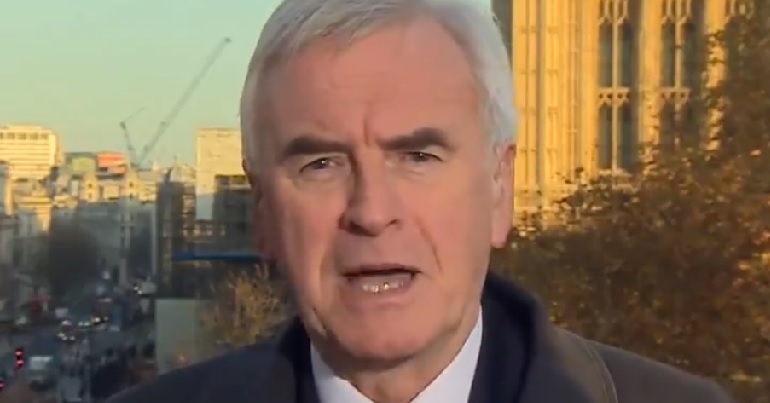 Labour’s John McDonnell has told the BBC right to its face that it’s “being played” by Tory leader Boris Johnson.

“The BBC needs to wake up”

On 29 November, McDonnell was on the BBC talking about Johnson chickening out of the Channel 4 climate debate the night before. Due to Johnson’s absence at the debate, Channel 4 poignantly replaced him with an ice sculpture. The Conservatives then complained to media watchdog Ofcom and threatened Channel 4‘s licence. But Johnson’s apparent attempt to avoid scrutiny is nothing new. Because only recently, he refused a debate with Labour leader Jeremy Corbyn on Channel 4; and while Corbyn has already done an interview with the BBC‘s Andrew Neil, Johnson has yet to do the same.

Boris Johnson thinks he’s above everybody else – this sort of Bullingdon Club attitude that he’s not the person who should be held to account. He’s the prime minister. Of course he should’ve turned up.

He then turned to the BBC, stressing:

The BBC needs to wake up to this as well. Because I think you’re being played by Boris Johnson. He’s avoiding his interview with Andrew Neil. He’s delaying it beyond postal vote stage. So I think you need to start looking at yourselves about what you should be doing to hold him to account. He’s making sure there isn’t a proper debate.

The BBC has faced criticism on a number of fronts recently for its apparently pro-Tory bias. And it does even seem aware that ordinary people are losing faith in its supposed ‘impartiality‘:

The BBC is in trouble again over some of its coverage of the election – it's been accused of being biased in favour of Boris Johnson? Do you think the BBC is losing its balance?

For this reason, McDonnell was completely right to hold it to account.

The BBC now seems to be taking some small steps forward. For example, it has reportedly refused to let Johnson go on its Andrew Marr Show until he has agreed to an interview with Neil.

With its debate decision on Johnson, Channel 4 made the right call. Simply ignoring his absence would have been wrong. Because the Conservative government has been weak on the climate emergency. And Johnson’s record in particular pales in comparison to Corbyn’s:

The choice is clear.

A Green Industrial Revolution with Labour or climate chaos under the Tories. This is all you need to remember 👇 pic.twitter.com/gtoiAgr1dZ

With this in mind, and Johnson’s general uselessness when people hold him to account, it’s no surprise that he’s trying to avoid greater scrutiny:

One apparent Tory excuse for Johnson not turning up to the leaders’ debate on 28 November was that he was “out in the country campaigning – getting our message out there: to get Brexit done”. But even that’s dodgy. Because as The Canary has reported, Johnson’s Brexit deal will not ‘get Brexit done’. It will probably involve months and even years of extra negotiations. And even then, it may still end with ‘no deal’:

This is a stark admission from Boris Johnson that a no deal Brexit is still on the table.

His ‘get Brexit done’ rhetoric is an utter sham.

A vote for the Conservatives in two weeks’ time will put people’s jobs and livelihoods at risk. https://t.co/g8WKFzgHc5

There are so many reasons to call Johnson out. But McDonnell’s right: it’s the media’s job to do so. And if they don’t do their job, we must do it for them.