In just four words, Sturgeon reminds us why the NHS is not safe with the Brexit Party or the Tories - Canary 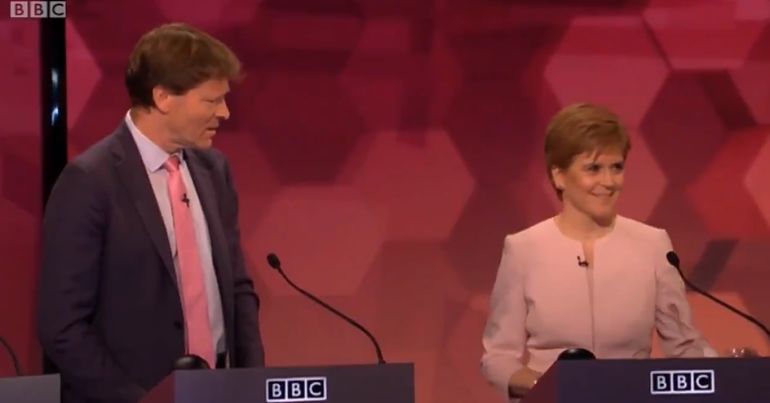 On the BBC’s Election Debate on 29 November, SNP leader Nicola Sturgeon left Brexit Party chair Richard Tice MEP utterly speechless. Her comment also reminds British people that the NHS is not safe with either the Brexit Party or the Tories.

All seven panellists were responding to this question from a member of the audience:

If you had 30 seconds with him [Donald Trump], what would you say?

Most panellists said they’d tell him to resign or to deal with the climate emergency. Labour’s shadow business secretary Rebecca Long-Bailey said:

he needs to change his position, there is a real climate emergency, and if we don’t take action now we’re not going to leave a world or a future for our children.

But neither the climate emergency nor Trump’s record featured in the Brexit Party chair’s response, he simply said:

Sturgeon immediately responded with what she thinks Tice would really say:

And here’s our NHS

Everyone on the #BBCDebate was asked what they would say to Trump when he visits the UK next week.

Nicola Sturgeon absolutely wiped the floor with the Brexit Party's Richard Tice – his facial expression at the end was priceless.💥 pic.twitter.com/aXfJtWmVNM

But the exchange wasn’t finished and neither was Sturgeon. Firstly, Tice immediately came back and accused Sturgeon of:

lying to the British people

But Sturgeon had the last laugh when she said:

Oh, I think you’ve got form on that.

And Tice’s expression said it all. There was no comeback.

Parties supporting Brexit were accused of the breaking electoral law during the 2016 referendum and fined for data breaches. So Tice knew that Sturgeon’s comments rang true.

Other people reacted to Sturgeon’s performance against Tice:

The other Tory guy didn’t need to be there, Tice spoke for both of them.
The First Minister still tore both his Tory and his brexit personas to shreds.

I disagree with Sturgeon on many things but… that look 🤡🤣

You can just tell that old Dickie Tice isn't used to being challenged by women, can't you? Only a Labour majority govt can stop Trump from getting his hands on our NHS.#bbcdebate #bbcelectiondebate #notforsale pic.twitter.com/i0AznQ55TL

The Brexit Party, the Tories, and the NHS

And the threat to the NHS raised by Sturgeon was underlined by Labour leader Jeremy Corbyn earlier in the week. He publicised a significant document that appeared to show details of negotiations between UK and US officials on post-Brexit trade. And while Boris Johnson denies it, Corbyn suggested this means the NHS is very likely “up for sale” in a trade deal with Trump.

And let’s not forget one of the most outrageous claims made by the Vote Leave campaign in the 2016 referendum was that exiting the EU would result in £350m per week for the NHS. The SNP leader reminded Tice of this earlier in the debate:

Brexit Party’s Richard Tice says “with a proper Brexit, we can cut prices and we can raise wages”

SNP’s Nicola Sturgeon interjects “He used to say we’ve got £350m extra a week for the NHS, it’s people like him that the public don’t trust”#BBCDebate https://t.co/hK0XIORhsk pic.twitter.com/VpW8F0TZ2k

This debate also reminded us how the Tories continue to spend less and less on the NHS:

#bbcelectiondebate Rish Sunak does not mention

This is a percentage change or Fall of – 74%

This is the lowest in 70 years – Say IFS

But you can't have both – Agree RT pic.twitter.com/eFwjSnC9Bf

— Ramesh Patel – They Would Rather You Ignore This (@IamalrightJack) November 29, 2019

Sturgeon’s comments highlight that the lies told by Brexiteers during the referendum campaign helped create the mess the UK is in. But the British people can end this, and they can ensure the Tories and the Brexit Party don’t put the NHS up for sale to people like Trump. The day when that happens is getting closer.