Anti-Corbyn fake news has just hit a new low. And it's likely to get far worse. - The Canary

Fake news and smears aimed at Labour leader Jeremy Corbyn are nothing new. However, it’s not just the usual tabloids that are guilty of this, newer technologies are playing their part.

These attacks are not only malicious but, more seriously, have the potential to encourage harm of any magnitude.

On 29 November, a horrific knife attack took place on London Bridge. That saw two innocent people killed, three injured and a third, the suspect and who was previously jailed for terrorist offence, shot dead by the police.

Not long after, Corbyn tweeted this:

Shocking reports from London Bridge. My thoughts are with those caught up in the incident. Thank you to the police and emergency services who are responding.

This was followed by:

My response to yesterday's awful attack on London Bridge.

We must and we will stand together to reject hatred and division. pic.twitter.com/BUrI5ME6T8 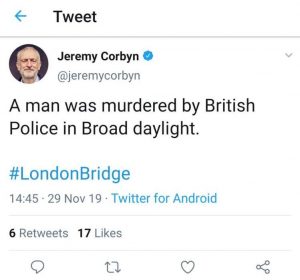 Except it’s a fake. And it’s not even a real tweet.

Although it seems some were fooled by it:

He was sent this on a WhatsApp group. And it’s totally fake. Had to try and convince him to actually look at Twitter itself. He *still* isn’t sure #fakenews pic.twitter.com/PVKugjfKap

The Corbyn’s actual Twitter timeline included no such tweet. Furthermore, the image displayed Arial regular font, which is not used by Twitter. And Corbyn never tweets from an Android.

But a certain amount of damage was already done:

Even though he now knows it’s fake, the damage is done because it’s reinforced a perception he already had of Corbyn as an apologist

One Twitter commentator responded by referring to fake activities by the Conservatives. Indeed, only recently, the party published a fake Labour website and re-branded its Tory Twitter account to masquerade as a ‘fact checker’:

Yep, the damage is done. This is the way politics works these days. I'm looking at you @CCHQPress. Make up a lie and even if you later apologise for it you've still put the idea into people's heads.

Smear attacks and attempts to undermine Corbyn have been relentless.

For example, in 2015, a British Army general claimed that Corbyn would face a mutiny should he attempt to end the Trident nuclear weapons system or withdraw the UK from NATO. A similar claim and threat were recycled in 2018. And In February of that year, the right-wing tabloids even claimed Corbyn was a Czech spy, although the allegations were easily shown to be groundless.

Misrepresentations can also be subtle. For example, in 2015, in the wake of terror attacks in Paris, BBC reporter Laura Kuenssberg asked Corbyn:

If you were prime minister, would you be happy to order people – police or military – to shoot to kill on Britain’s streets?

I am not happy with a shoot to kill policy in general. I think that is quite dangerous and I think can often be counter-productive.

But when the interview was aired, Kuenssberg changed the emphasis of the question to:

The BBC Trust found that the:

breach of due accuracy on such a highly contentious political issue meant that the output had not achieved due impartiality.

This was also covered by The Canary. The Keunssberg report, however, is still available on the BBC website and apparently trending:

So this report about Corbyn's supposed views in shoot to kill came out in 2016 and is still on he BBC website, despite the fact it was found to be inaccurate two fucking years ago. It is now trending on the BBC website *during an election campaign*. pic.twitter.com/sXYRvTZNSz

In recent years it’s been getting more and more difficult to distinguish real news from fake news and outright smears. This is especially so, given the use of digital technologies to assist in the fraud.

In this particular instance fake news hit a new low, exploiting a terror attack to simply score a political point.

Sadly, we should expect that this kind of fake news is likely to remain a feature of our everyday life.