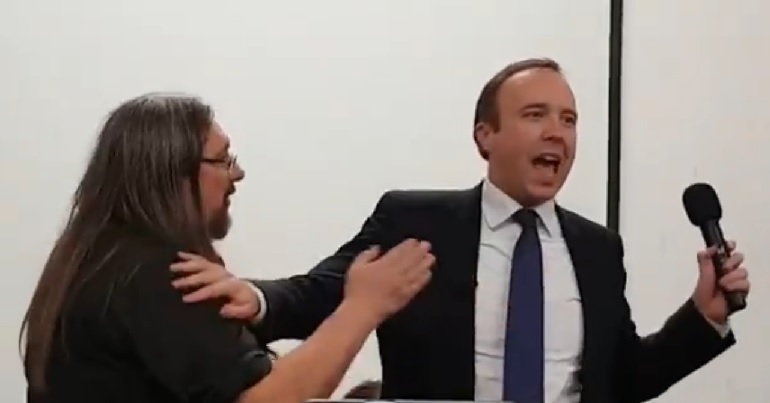 At a hustings event on 29 November in Haverhill, Suffolk, health secretary Matt Hancock tried to sell the Tory pledge of recruiting 50,000 nurses. But the audience had reason to be sceptical, especially since Boris Johnson himself was unclear on LBC Radio about the accuracy of this statement as there will actually be only 31,000 new nurses.

When Hancock noticed the audience wasn’t buying it, he predictably diverted to talking about antisemitism in the Labour party. The audience, however, saw past this – they began booing and calling him a liar:

Everything about this shames @MattHancock.

The words, the attitude, the physical.

Just wrong on every level.

No wonder the room was in uproar.

We need to get these nasty, lying, cheating @CONservatives out. pic.twitter.com/Lc0YK7RtRe

Hancock has developed a bit of a reputation for being an ’empty vessel’. And this isn’t the first time he’s been caught out making misleading claims about the NHS.

When the chair of the event tried to intervene, Hancock held him back so he could carry on talking:

You have just got to read the tweets from #haverhillhustings.
Apparently @MattHancock was as bad as we thought.
He said the GP situation in the area was because of irresponsible patients.
And here he is keeping the Chair back so he can continue talking…#labournhsrescue pic.twitter.com/FLwYNNwn9k

The Tories aren’t fooling anyone

Of course, with the upcoming election, the stakes are even higher. And the audience’s anger is more than justified. Since it’s the Conservatives’ policy of cutting nursing bursaries and underfunding of the NHS that’s caused staff shortages in the first place.

However, reactions to the video make it clear that Hancock, and the Tories, aren’t fooling anyone with their diversion tactics:

Matt Hancock (aged 14) getting all stroppy in Haverhill with local people in his math class, when he repeats, everything adds up to 50000! They don’t believe him so he blames Jeremy Corbyn, classic strop#Wycombe #chingford #Telford #GeneralElection19 https://t.co/5007HJmQ1M

Well done to the people who attended #haverhillhustings last night. You called out @MattHancock and his lies. You stood up for @jeremycorbyn when Matt shamefully weaponized anti semitism yet again for his own political agenda.

What’s more, the rest of the hustings was a bit of a train wreck too. Hancock is MP for West Suffolk, and the locals appear to be unimpressed by his track record:

He neglects to mention that the choice is between being a cleaner, or standing on a meat packing line.#HaverhillHustings

Hancock just told his constituents that he’s delivered one new bus route in the last nine years. It’s not yet clear what slogan has been painted on the side of it. #haverhillhustings

Disappointed, but not surprised by your behaviour last night @MattHancock. There was no need for you to start attacking the other parties, or treat your constituents with contempt. And you didn’t get to answering the question about Mental Health in Haverhill. #haverhillhustings https://t.co/AKMLYPVj54

People in Haverhill weren’t going to give Hancock a pass for his antics. A decade of Tory cuts and neglect of working-class people, combined with Johnson’s open lies and bigotry, aren’t going unnoticed. And there’s only so much damage control that accusing Jeremy Corbyn of antisemitism will do. While polls may be putting the Conservatives ahead, there’s still everything to play for on 12 December.