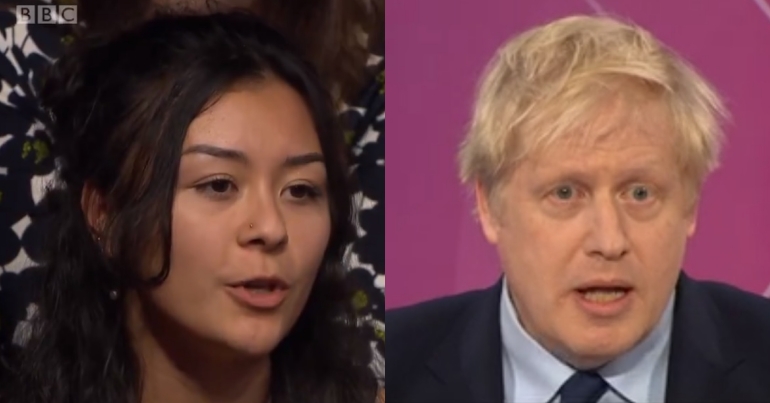 On 22 November, the leaders of the UK’s main political parties took part in BBC’s Question Time Leaders’ Special in Sheffield. Each of the four leaders faced questions from a live studio audience.

And yet again – on the topic of racism and sexism – Boris Johnson showed why he’s wholly unfit to be prime minister.

One member of the audience, Olive Enokido-Lineham, put Johnson’s racist record to him by asking:

Racist rhetoric in this country is completely rife. Will you admit that you have personally contributed to this and say the words ‘I’m sorry’?

Given the opportunity to apologise for his history of racist and bigoted language, Boris Johnson refused. The man is a disgrace.#bbcqt #GetJohnsonGone pic.twitter.com/b8My8BiTcd

But Johnson refused. And this wasn’t the first time he’s refused to say “I’m sorry”.

Johnson claimed Enokido-Lineham was “referring to” just one “particular article” he wrote that was derogatory and Islamophobic. But as host Fiona Bruce said, “in fairness, there’s a few articles”. Bruce reminded Johnson of the racist and homophobic articles he wrote insulting Black people, Muslim women, and gay people.

But instead of apologising, Johnson tried to justify his vile words, saying:

if you go through all my articles with a fine tooth comb… and take out individual phrases there is no doubt that you can find things that can be made to seem offensive.

But even if it had been just that article, it still sparked a high rise in Islamophobic incidents in the UK:

Wow! This is troubling. Our data shows a rise of 375% of incidents reported by people who have been called 'letterboxes' following Johnson's column. With leadership comes responsibility, and we need more leadership for all communities in the coming days. #No2H8 https://t.co/vbXZethLKl

And few people in the audience bought Johnson’s pathetic ‘defence’. Nor did those watching, including Labour’s David Lammy:

Boris Johnson is not fit to be Prime Minister #bbcqt pic.twitter.com/UTOmL5idf5

#BBCQuestionTime Boris Johnson completely unable to say he's sorry for the racist remarks he's made… racism is inherent in the ruling class
“Racist rhetoric in this country is rife, will you admit you have personally contributed to this?”
#bbcqt pic.twitter.com/RIc9PMkRvd

Johnson has literally been ripped 'a new one'!

If the BBC have done one thing right in its coverage it's this 30 minute session with Boris Johnson.

Well done to the audience !✊🏼

If you want this man to remain Prime Minister, just don't pretend you care about LGBTQ people or racism. You don't. #BBCQT

Then he made it worse…

Shockingly, Johnson claimed he was actually standing up for women:

What I was really doing was mounting a strong liberal defence of the right of women in this country to wear what they choose.

The audience groaned in disapproval. Another member of the audience responded to Johnson’s alleged defence of the right of women, saying:

This is just straightforward Orwellian. The Tories reinstated Tory councillor David Abbott in time for this year’s local elections, despite him posting Islamaphobic comments online. And he doesn’t appear to have apologised.

One academic researcher described Islamophobia in the Tory party as an “epidemic”. And it has still failed to hold an inquiry into Islamophobia within the party. Tory peer Baroness Sayeeda Warsi, meanwhile, has shown that her party has a problem with Islamophobia and that its members have a track record of “engaging in or endorsing Islamophobic sentiments or conduct”.

Johnson’s racist position stands in stark contrast with the leadership of the Labour Party. Despite the smears, Jeremy Corbyn is emphatically not antisemitic. And both Corbyn and shadow chancellor John McDonnell campaigned strongly against apartheid in the 1970s and 1980s. Labour has also put forward progressive policies to address injustice, inequality, and women’s rights.

So on 12 December, the public can choose between Johnson and his shameful bigotry or, someone who truly stands up for, and defends, the rights of British people.