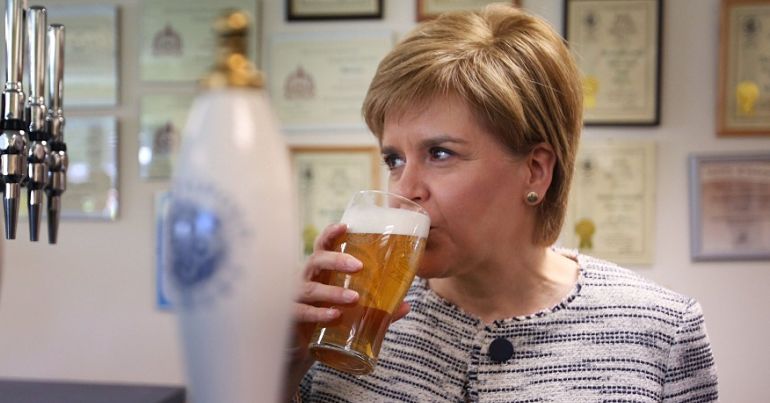 On 22 November, the leader of the SNP and first minister of Scotland took part in BBC Question Time’s Leaders Special. And she absolutely nailed it. Sturgeon ruled out (again) backing the Conservative leader Boris Johnson for prime minister which received vigorous applause.

Scotland’s first minister said “I could not, in good conscience, ever put Boris Johnson into number 10 Downing Street”:

“It’s not for Westminster to decide, it’s for the people of Scotland”@NicolaSturgeon on the SNP’s plans for Scotland’s future. #bbcqt pic.twitter.com/HZg2K0tnjY

But Sturgeon didn’t stop there. She went on to say that “I’ve seen the misery the Tory policies have heaped upon people”.

SNP may potentially hold the balance of power in the event of a hung parliament. And Sturgeon said her MPs would use that ‘influence responsibly’. The first minister also said her party would use that position to not only ‘stand up for Scotland’ but also for “progressive values for people right across the UK”.

Sturgeon made it clear that the SNP would expect Jeremy Corbyn to allow Scotland another independence referendum in exchange for any support at Westminster. But she also said she’d “want an end to austerity” and “an end to the misery of Universal Credit”. Moreover, Sturgeon wants to see the NHS protected in any potential trade deals and fairer pensions across the UK.

Indyref2 justified in one sentence

Sturgeon also made a succinct argument for Scottish independence. When challenged by an audience member about supposedly ‘prioritising’ Indyref2 over ending austerity, the first minister gave the perfect answer:

.@NicolaSturgeon: "Scotland hasn't voted for a Conservative Westminster government for 60 years, but for 36 of those years we've had to put up with a Tory government. And now we face being dragged out of Europe against our will." #bbcqt #VoteSNP #GE2019 pic.twitter.com/2mR1Cir757

And she stated again that she’d never put a “Tory prime minister into power”.

The first minister explained the “damage” she had seen growing up in the west of Scotland during the “Thatcher years”. But she acknowledged that damage was felt across the UK. She also made it clear she’d expect Corbyn to allow Scotland to ‘choose its own future’. And Sturgeon believes Corbyn won’t “turn his back on ending austerity in order to block” Indyref2.

The SNP leader absolutely nailed her appearance on this show. She managed to get across her opposition to Johnson as prime minister on a UK-wide platform. Make no mistake, we need Corbyn in Downing Street after 12 December. But it’s reassuring to know Sturgeon and the SNP MPs will help lock Johnson out of power in the event of a hung parliament.

This type of progressive cross-party working is exactly what the UK needs right now.