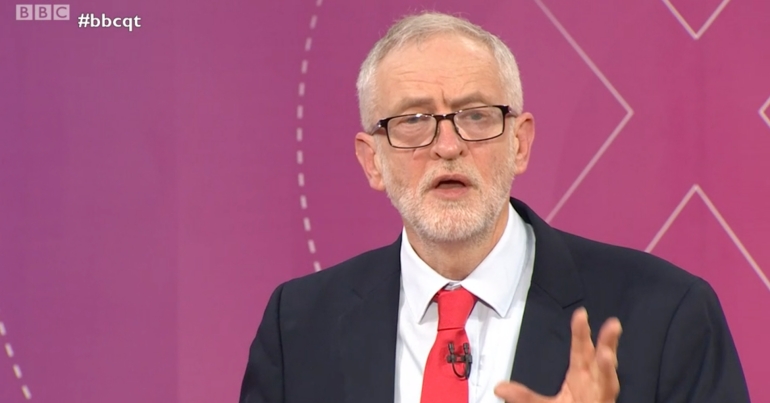 The billionaire right-wing press was seething on 22 November after Boris Johnson’s performance during the BBC Question Time (BBCQT) leaders’ debate. Like most times Johnson has appeared in front of ordinary people, he was exposed as a lying, blustering racist who can’t be trusted. As Labour MP Laura Pidcock tweeted:

Away from the theatre of Parliament; away from the small group of Etonians braying & cheering him on from the benches behind, @borisjohnson is shocking in the face of the scrutiny of real people detailing their pain & discontent after a decade of austerity. Unfit to be PM. #bbcqt

But it’s not just Johnson’s performance. There are signs that Jeremy Corbyn’s campaign to become our next PM has gone next level. And the establishment media really isn’t happy.

Now, BBCQT isn’t always known for its lack of bias or balanced audiences. But one thing that stood out during this debate was that all the party leaders were asked tough questions. But this didn’t stop the Express running the headline:

Meanwhile, the Daily Mail went with:

And the Sun got its knickers in a twist that an actor actually dared to also have political views:

In fact, a good sign that the campaign might be going badly for the Tories is when the Sun is reduced to using a poll showing that support for the party has gone up among its own readers:

Support for the Tories among readers of @TheSun climbs to 52%, up 6 points since #ge2019 was called. Brexit Party and Labour now both on just 7%. In 2017, 30% of Sun readers voted Labour.https://t.co/bGpkhlHcfa pic.twitter.com/BcWtTtbFIQ

Taking the campaign to the next level

Corbyn certainly didn’t get an easy ride during the debate. But compared to Johnson – and let’s not even mention Jo Swinson – he was the clear winner. But it’s not just the debate itself that’s taken his campaign to the next level. Firstly, there were the crowds outside the debate:

And while Corbyn was greeting the crowds, Johnson was left sneaking in the back door.

Then there’s the news that the drive for voter registration is working. 308,000 people registered to vote in one day – the largest ever voter surge ahead of the deadline day for voting. 200,000 of these new voters are under 35. This is significant for the Labour campaign, because according to YouGov, “age seems to be the new dividing line in British politics”. And young people are much more likely to vote Labour.

Meanwhile, people across the country are out on the streets and on doorsteps, spreading a message of hope – that things can be different. And in Johnson’s seat of Uxbridge, Ali Milani is leading the charge to ‘make history’ in a “neck and neck race” to unseat the PM:

🚨Join us this weekend to Unseat Boris Johnson 🚨

We will be out all weekend making history. This is looking like a neck and neck race so your efforts could make all the difference!

No wonder the billionaire press barons are going into meltdown.