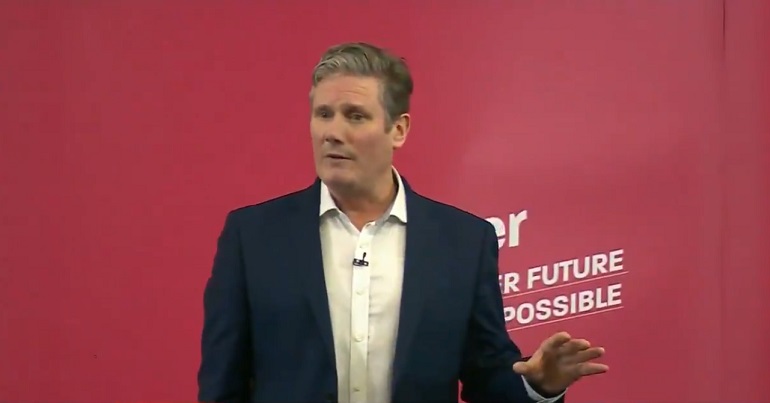 The Labour leadership contest is underway. One of the candidates, Keir Starmer, launched his campaign on 11 January. However, Starmer has already given people more than enough reasons to mistrust him. Now, serious questions have emerged about how he handled questions concerning the background of a campaign staff member at his launch.

When asked about his decision to hire Ben Nunn, an ex-lobbyist for private healthcare companies, Starmer said he “won’t tolerate” it:

Today a I went to Keir Starmers launch event in Manchester. I asked a question about how he thought he’d be able to defend the NHS when he recently hired Ben Nunn – a lobbyist for private healthcare companies. https://t.co/huMF9xRVWW

The NHS is number 1 issue for Labour members & the record of Starmer, and his team, will rightly be assessed on issue. If he can’t give an authoritative answer at such an early stage, and with such a small outlet, he has problems

This isn’t optics, it’s about the biggest issue >

In an interview with the Mirror, Starmer emphasised his commitment to protecting the NHS. Speaking of the care NHS staff gave his late mother, he said:

I don’t need much persuading in terms of the importance of the NHS.

However, hiring Nunn raises questions about Starmer’s commitment to defending the NHS from privatisation. And moreover, evading scrutiny over the background of his campaign staff is not a good look. Particularly when their background conflicts with Labour values:

Keir Starmer today was asked questions about his recruitment of former private healthcare lobbyists & how he can claim to defend the NHS when he hires people who have helped dismantle it. Despite a robust defence of his staff he didn't answer the question: https://t.co/hmHMaQZ0d5 pic.twitter.com/kf9jmlcawf

Interesting that Keir Starmer "won't tolerate" comments about his staff. It's of interest to us and the public who his staff are, plus the precedent has been set by 4 years of bizarre conspiracy theories about Seumas Milne and Corbyn's staff, so, too bad. We're going to comment.

In fact, Nunn isn’t even the only questionable choice for Starmer’s campaign team. Only a couple of days prior to Starmer’s campaign launch, it came to light that Matt Pound had joined his campaign. The Morning Star identified Pound as “the leader of anti-Corbyn group Labour First”. He’s an outspoken critic of Jeremy Corbyn and his efforts to reform the Labour Party. His appointment prompted further questions about Starmer’s team:

Luke Akehurst, the man who effectively *is* Labour First, is a pro-Israel/pro-nuclear lobbyist masquerading as a Labour supporter. He has spent the last 5 years campaigning to prevent Jeremy Corbyn becoming PM. Akehurst hired Matt Pound to help him. Keir Starmer knows this. https://t.co/N7YAsteNZH

The role of Labour First in undermining Jeremy Corbyn’s leadership, and the Labour left, can’t be denied. It seems the composition of Starmer’s campaign team could be cause for concern for those on the Labour left:

So Keir Starmer's team is now comprised of the Owen Smith campaign team, Progress, and Labour First, the hard right reactionary group established to expunge all traces of the left from Labour, who explicitly want to ban Momentum and Corbyn supporters from Labour

As Labour’s leadership contest unfolds, an anti-left media bias is already becoming evident. Attacks on Rebecca Long-Bailey, in particular, are beginning to resemble what Corbyn had to face. But moreover, from Starmer’s campaign staff, as well as his track record, one thing is clear. Can he be trusted to protect the NHS if he can’t answer basic questions about members of his team?