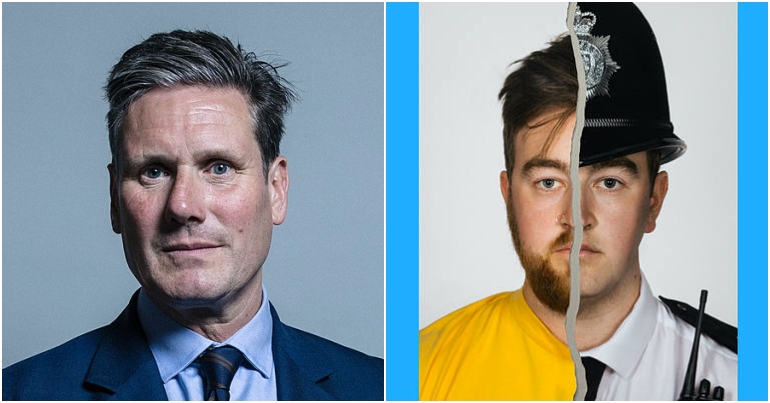 Keir Starmer announced his intention to run in the Labour leadership contest on 4 January. But there’s a message that anyone thinking of voting for Starmer needs to read before supporting him.

Let’s be clear on Starmer’s record

Starmer has reportedly taken an early lead as the favourite candidate among Labour MPs. A promotional video for Starmer’s campaign features the work he did representing the striking print-workers at Wapping and the free legal advice he gave to poll-tax protesters. The video also states that:

Keir stood in solidarity with workers and trade unions.

Later in the video, his work ‘standing up for protesters’ in the 1990s is extolled.

Starmer has, without doubt, done some excellent work in his career. But the video omits some of the decisions Starmer made as the Director of Public Prosecutions (DPP). As DPP, Starmer was responsible for prosecuting all those lovely people he previously defended. But more significantly, there are serious questions over Starmer’s role in covering up the undercover policing scandal.

Keir was DPP when revelations were published about the first known modern ‘spycop’, Mark Kennedy. Kennedy infiltrated environmental and anticapitalist groups between 2003 and 2009. In 2011, a trial of environmental activists accused of plotting to break into Ratcliffe power station collapsed after it emerged that the Crown Prosecution Service (CPS) had covered up vital evidence. This evidence consisted of recordings Kennedy had made of planning meetings. Starmer was present in court the day the case was thrown out.

20 people already prosecuted from the same action had their convictions overturned. And a further 29 people convicted of blocking a train carrying coal to Drax power station also had convictions quashed due to Kennedy’s involvement.

The CPS ordered an investigation into what had happened. Interviewed about the ensuing report in 2011, Starmer said:

If Sir Christopher Rose had found systemic problems, then I would quite accept perhaps a retrospective look at all the cases. But he didn’t, he found individual failings.

But it was systemic. In 2015, the Guardian reported that 83 people could have been wrongfully convicted after evidence of spycop involvement was withheld. And details of exactly how systematic it was are still coming out. On 6 January, the Guardian published details of the case of an 81-year-old man trying to get a conviction overturned for an anti-apartheid protest in 1972. Following revelations from the Undercover Policing Inquiry, he discovered that the person he was convicted alongside was actually an undercover police officer.

If the other 150 or so officers have similar tallies [as Kennedy], it means about 7,000 wrongful convictions are being left to stand. Even if we conservatively estimate just one false conviction per officer per year of service, it adds up to about 600. It may well be that spycops are responsible for the biggest nobbling of the judicial system in English history.

So Starmer’s suggestion that Kennedy’s actions were not systematic is bullshit.

What’s less clear is how much Starmer knew and how much he covered up. But those of us involved in the Undercover Policing Inquiry are not convinced of his innocence. As one core participant said, the scandal:

wasn’t just the police. Released papers showed the Crown Prosecution Service had been deeply involved – they knew about the plan before the arrests, they worked with the police to withhold evidence from the defence and the courts.

“Do you trust him to lead the Labour Party”?

Regarding Starmer’s involvement, the participant added:

As the Director of Public Prosecutions, Keir Starmer went on TV to promote the report. Clearly untrained for media, he did this weird rapid blinking thing whenever he was lying.

Paxman opened by asking if Starmer could be sure there were no other cases of spycops being in prosecuted groups of activists apart from Kennedy. Starmer did the blinking thing and said that we have to accept Rose’s already discredited conclusions. Which is not an answer to the question, so Paxman asked again… It was excruciating viewing.

Starmer went on to say that, if anyone suspects a co-defendant might have been a spycop, to tell him. But how can we know which of our former comrades were cops?

It’s like getting burgled, finding a fingerprint and the police saying ‘come to us if you know whose print it is’. It’s they who have the records that put names to the prints, they should be looking at them and telling us and then we can check. Surely they should check their own files to see if officers were known to have been prosecuted.

It’s clear that officers deceived courts and orchestrated wrongful convictions for decades, and they did it with the active collusion of the Crown Prosecution Service. As head of the CPS, Starmer knew this but, rather than try to expose it, he lied to cover it up, saying it was just rogue officer Kennedy even though it was already public knowledge that wasn’t true.

And this leads to one very important and fundamental question for everyone selecting the next Labour leader:

Do you trust him to lead the Labour Party with honesty & integrity?

He had the power to deliver justice and didn’t

I was also spied on by several police officers and am also a core participant in the inquiry. My simple answer to the question above is no. We don’t know exactly what Starmer knew. But he was DPP. Even if he didn’t know all the details, he was one of the few people in the country with the power to find out and with the power to deliver justice. He didn’t. And this lack of integrity means I could never vote for him as Labour leader.

As DPP, Starmer also worked with Nick Paul, the national coordinator for ‘domestic extremism’ at the CPS. As the Undercover Research Group reported, Paul:

had the job title of CPS’ National Coordinator for Domestic Extremism, even though that term has no legal definition and thus no meaning in law. He was in a powerful position of control from the start, overruling senior police as he steered the case. Which raises questions about his role in other cases. He had already helped create another miscarriage of justice the previous year, securing the wrongful convictions for the ‘Drax 29’ group of climate activists. The CPS refused to say which other cases he had handled.

But in terms of Starmer, this raises other questions about his suitability for Labour’s top job; particularly for anyone who’s ever attended a protest and who could be labelled a domestic extremist. And as someone with a domestic extremist file going back to the time when Starmer was DPP, Starmer’s radical history tour video is grossly offensive and disingenuous. His video states that:

Keir stood up for the protesters who were trying to stop the widening of the M3 and the destruction of the downland when the full force of the state was against them.

These are the same protesters that were spied upon and labelled domestic extremists.

Starmer’s work as the DPP is a classic case of poacher turned gamekeeper. However good his work in the 1980s and 90s, he was happy to work as head of an organisation which: promoted prosecuting people for protesting; promoted using the term domestic extremist; and couldn’t even be transparent over how many cases Paul was involved with.

“This is about my people, our people, us”

Ultimately, Starmer was head of an organisation that supported and enabled the political policing many of us have spent years fighting. Even if he didn’t have the oversight of what was happening with spycops, he was happy being part of that system. And that’s without going into detail over the appalling decisions Starmer made regarding prosecuting the officers involved in the deaths of Jean Charles de Menezes and Ian Tomlinson.

As Mae Benedict, who was spied on alongside her young child, put it:

This is about my people, our people, us. It’s hard to explain to generations below us the immense damage that these bastards did to us, not just as activists, as a community, but on a personal level, and much more so for those closest to them. This will never, ever be forgiven or forgotten.

This is exactly how I feel. Supporting Starmer would be a betrayal. So if you’re voting in the Labour Party leadership election, please listen to how the victims of police spying feel. Not just out of solidarity – but because of what our experiences, and how Starmer is using his radical past, tell us about his honesty and integrity.

Featured image via Wikimedia and Police Spies Out of Lives