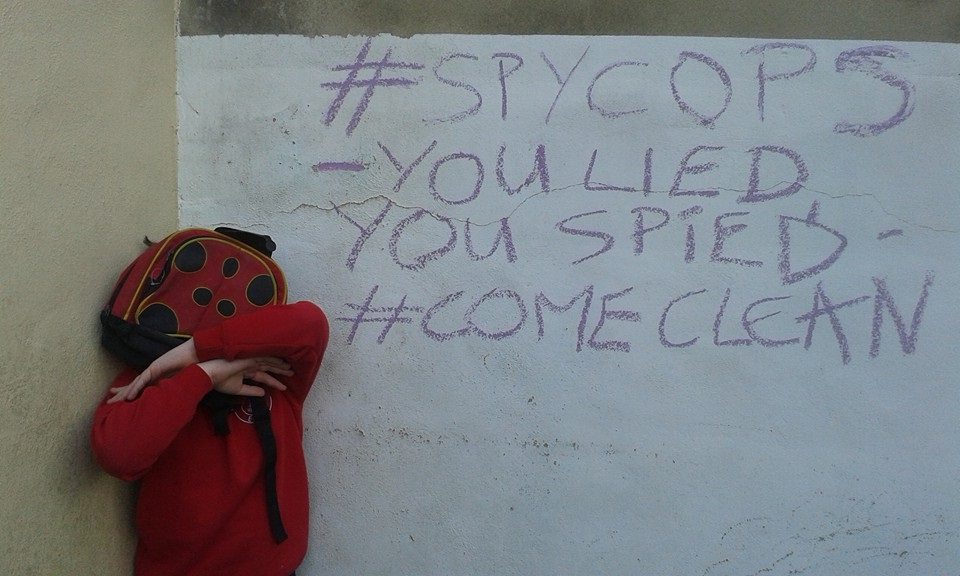 The Undercover Policing Inquiry, chaired by Lord Justice Pitchford, resumed this week with legal arguments being made by the police which, if implemented, would essentially mean most of the inquiry being held in secret. Central to their position is a continuation of the policy of neither confirming nor denying (NCND) whether a person was an undercover officer.

However, whilst the lawyers for the police have been arguing that revealing the identities of officers would infringe their Article 8 right to privacy and family life, The Canary can reveal that police officers have been recording details of activists’ young children.

Mae Benedict put in a Subject Access Request to find out what information the domestic extremist units held on her. She believed she might have a file as she had been arrested in the past for environmental activism. She had also been close to the only known female undercover officer, Lynn Watson. However, she was shocked to discover her file left out details of “several arrests and a conviction” but contained details of her young child:

It made me furious that my kid is on a police file already, and mostly it was really intrusive. Instead of details of when I HAD been found guilty of a crime, the focus instead was on me as a parent, and, by default, my child as a child of mine.

Ms Benedict said that whilst she knew Lynn Watson before becoming pregnant, they spent a lot of time together following the birth of her child:

The undercover cop and I knew each other before I was pregnant, but it was only after I had my son that we became close. It was at this time she moved from one group to another. She would come round regularly, and bring wine and we would eat dinner together and chat. There had been murmurings of suspicion as there had been with so many of the cops before. However, the fact that I had a new baby and was obviously inactive politically, and mostly talked of the issues around childbirth injuries or breastfeeding, made me feel much less suspicious. She liked to chat about her own nephews and had funny stories, and I confided in her about many confidential things around my family and relationships. She also got me to talk about past actions.

Furthermore, Ms Benedict does not have any doubts that the information on her file comes from the undercover officer:

I am sure that a significant chunk of info is from her about me, it says that I am one of the most well known activists in the north but have become less so since the birth of my son.

Pictured above is the bag Lynn Watson gave Ms Benedict’s son. She says she keeps it as a reminder:

I keep the bag as a memento of how invasive the cops are with a disregard to the right to family life, how devious they are, and how they are still amongst us. I don’t need to of course, because I still have dear friends who are unrecovered and who will never really heal from this.

Given her experiences, it is unsurprising she is scathing about the police trying to claim a right to privacy and family life:

For THEM to actively insert themselves into the lives of families and THEN claim sanctuary under a piece of law they have absolutely violated leaves me disgusted.

Unfortunately, Ms Benedict is not the only activist to have had details of her child recorded on her police file. My own domestic extremist file has details of my young child. Details include his name, month and year of birth, and information on some of the protests I have taken him to. Again, I was close to an undercover officer who knew my child – he even bought him a giant polar bear and held him when he was only a few days old.
Reading that the police have recorded information about your child is a truly sickening experience. For my then 7-year-old to have a police file simply because they have a parent who is involved in political activism (in my case mostly environmental and anti-militarist protest) can have no justification.

Last year I applied to be a core participant in the Undercover Policing Inquiry. Campaigners fought hard to get this inquiry, and whilst many of us are cynical about it, the fact remains it is our best chance to start getting some answers about what happened.

There are over a hundred non-state core participants, and we range from environmental and anti-war protesters to grieving justice families and blacklisted workers. We all want to know why the Special Demonstrations Squad and the National Public Order Intelligence Unit spied on us and who the undercover officers were.

Both these factors are central to the success of the inquiry. Several of the core participants were deceived into long term sexual relationships with undercover officers, including the officer Bob Lambert, who fathered a child with an activist. Their rights to privacy and family relationships have been so grossly violated, and they deserve to know what could have possibly justified these actions.

Currently, we know less than 10% of the cover names of those who spied on us – with at least 130 officers known to have operated amongst protest and social justice movements. Even amongst those few, there are officers which the police are still refusing to confirm were undercover officers.

Furthermore, most of the revelations we have about undercover officers come from the work done by committed activists, and investigative journalists. Painstaking research by those who have been abused has led to the knowledge we have. It is unknown how many out of the remaining 90% have had sexual relationships with their targets, whether they befriended their children, or provided information which meant workers were unable to secure employment.

However, given the information we already have, it is likely this will be a high proportion. It is, therefore, essential that the cover names of the other undercover officers are revealed. Otherwise, there is likely to be a large number of people voiceless in the inquiry simply because they do not know who was spying on them, and what information was recorded on them. In other words, there are still people who do not know that their lover or best friend was an undercover police officer.

The real victims of the ‘spycops’ scandal are those who have been spied upon. It is hoped in ruling on the disclosure of this information that Pitchford remembers this. It is disgusting for the police to attempt to claim privacy whilst they have treated our privacy and our families with contempt. This inquiry must give all of us who have been betrayed and affected by this the opportunity to understand how and why it was allowed to happen – this can only happen if the names of the officers are revealed and their motives and tactics publicly examined.

Keep in touch with the Campaign Opposing Police Surveillance and go to their protests and events.