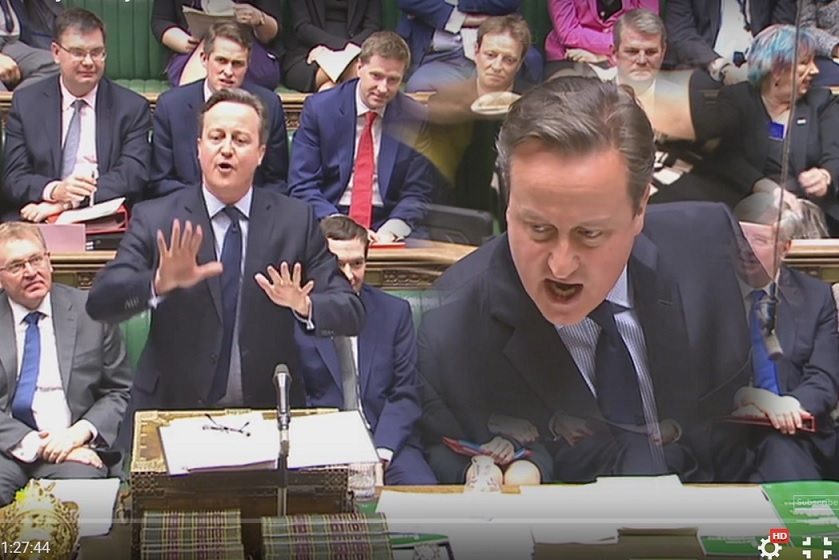 Jeremy Corbyn just asked David Cameron to “leave the theatre and return to reality”. As the Prime Minister tried to evade a big economic question in parliament with his now characteristic distraction techniques. The reality Corbyn was referring to at Prime Minister’s Questions (PMQs) on 23 March was that Cameron has:

presided over a budget that unravelled in 2 days, and now contains a £4.4bn black hole.

This figure is the key economic concern facing the country in the next few months, and Corbyn really grilled the Prime Minister on the issue, asking:

But instead of answering this big question, Cameron sought to distract the British public with a parliamentary pantomime of three acts, in which he focused on attacking his Labour opponents.

Corbyn had already asked about this black hole earlier in PMQs, referring to the government’s welcome U-turn on its core budget decision to cut Personal Independence Payment (PIP) support for disabled people. To add a particular sting to the question, he had quoted former Secretary of State for Work and Pensions Iain Duncan Smith, who said in his resignation letter last week that:

certain policies are enacted in order to meet the fiscal self-imposed restraints that I believe are more and more perceived as distinctly political rather than in the national economic interest.

But Cameron refused to focus on the self-imposed black hole in the government’s recent budget. Instead, he drew immense glee from talking about divisions in the Labour party.

Later, in response to Corbyn’s question about who was going to pay for the black hole, Cameron once again focused on the Labour party rather than the issues at hand. He responded to the Labour leader by saying:

Finally, Corbyn explained why it was so important for Cameron to answer his original question about the budget’s black hole, stressing the government’s big economic failures to date:

Predictably, Cameron continued to avoid the black hole in the government’s recent budget. Rather than clarifying how his party would meet its targets, Cameron again focused on attacking the Labour party, calling it:

This scaremongering tactic seemed to ignore the fact that past Labour governments have consistently “borrowed less and repaid more than the Conservatives”, as pointed out recently by Tax Research UK’s Richard Murphy.

So where will the money come from?

Since Cameron refused to answer Corbyn’s question, let’s look at previous government behaviour to determine whether the missing money will be found through cuts or taxes.

First, it’s very unlikely that the government will meet its targets by taxing Britain’s wealthiest citizens and businesses, considering that:

The most likely source of money for the government is privatisation and further cuts to public spending:

For now, the Conservatives have put off some awkward decisions and targets. The Independent’s Steve Richards suggests the Chancellor is simply:

keeping his fingers crossed, hoping something turns up between now and 2020 to help him meet his various targets and policy goals.

It may well be true that George Osborne doesn’t know exactly what he’s doing. But what he lacks in expertise, he definitely makes up for in passion. His fetish for privatisation and public spending cuts, for example, has been clear for all to see in the last six years.

So although the government refuses to clarify exactly how it will meet its economic targets and fill the black hole in its recent budget, all indicators suggest that we’re in for more cuts and more privatisation in the coming months and years.

See the full exchange between Cameron and Corbyn here:

– Support The Canary so we can continue to bring you what the mainstream media omits.

– Write to your MP and ask them to explain how the government plans to fill the black hole in its current economic plan.