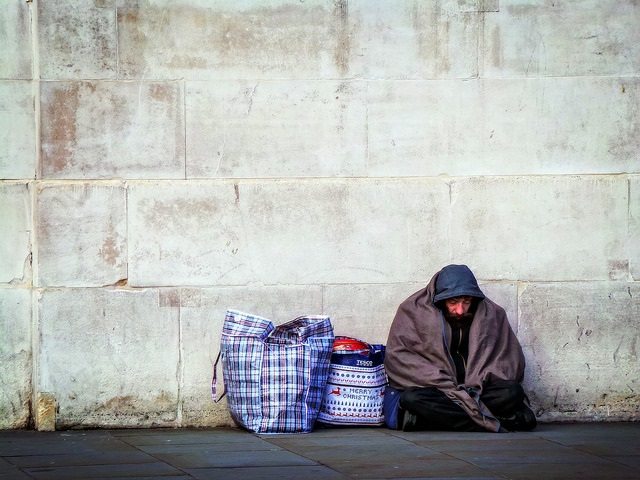 Nottingham City Council is under fire for releasing a series of offensive posters aimed at stopping people giving money to homeless people.

In conjunction with Nottingham Police, the posters are part of a #givesmart campaign, and claim that giving money to homeless people is the equivalent of watching “your money go up in smoke”, “down the drain” and “go to a fraud”.

Unsurprisingly, the posters have been widely criticised:

A petition has also been launched against the campaign:

And whilst the council is wasting money on this abhorrent campaign, essential services are being cut. Framework, a homelessness prevention charity which helps people facing eviction, will be for forced to close some of their specialist prevention services in Nottinghamshire after having their funding slashed. Andrew Redfern, the chairperson of the charity, believes the impact of the cuts could be far reaching:

Homelessness is already increasing across the country and I believe a substantial proportion of our service users – perhaps a few hundred – could end up homeless.

Unfortunately, this attitude of criminalising the homeless whilst cutting services is being repeated all over the UK. One in ten councils has implemented Public Space Protection Orders (PSPOs) that have criminalised homeless people. Those found in breach of PSPOs can be fined £100, and if they fail to pay, the fine can increase to £1000 and a criminal record.

36 local authorities have proposed or introduced PSPOs which target activities associated with homelessness. For example, in Exeter, a PSPO has been proposed which would include it being an offence to have “any unauthorised bedding, bivouac or encampment”. One homeless man, Steve Oswold, said:

“I get moved on two to three times a day. But it’s coming to the point now where you can sit down in town and you get moved on. It’s almost like the police have nothing better to do.

But it’s a bit harsh to take away someone’s bedding.

In Brighton, where 90 people a night are sleeping rough, a plainclothes police operation has led to the gaoling of at least one homeless person every week. Even those attempting to help the homeless have been arrested or threatened with arrest.

Homelessness has increased by 55% since David Cameron became Prime Minister. This crisis has been exacerbated by a lack of affordable homes and cuts to homelessness charities. Instead of helping the most vulnerable in society, the government and councils are criminalising those they should be helping.

Through this poster campaign, Nottingham council have fuelled prejudice and stereotypes of the homeless. It is a disgusting campaign, but luckily people have been quick to point out that the council need to apologise, and the posters need to be immediately withdrawn.

This article has been corrected on 13/04/15 to state that Framework have only had their funding cut to some of their specialist prevention services. Previously it stated that the whole organisation was facing closure.

Sign the petition to get Nottingham council to remove the posters.

Join the national demonstration on 16 April to End Austerity Now!