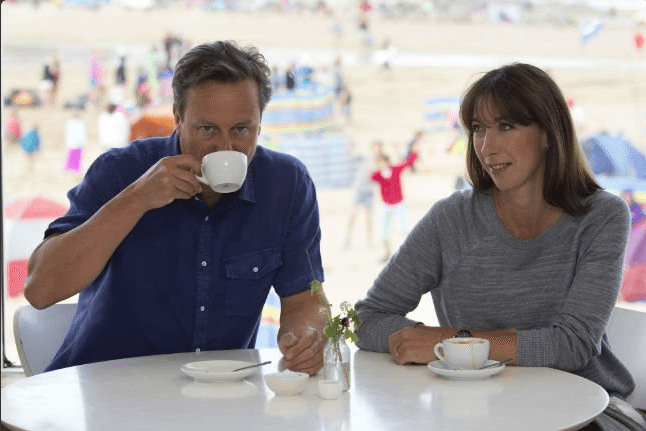 Imagine you awoke one morning to find David Cameron stood in your garden banging a For Sale sign into your flowerbed… Well, that morning has arrived.

The government’s Infrastructure Act removes control for decisions to sell or develop publicly owned land from the public sector. In short, before long, a private company will have the power to sell publicly owned land for Fracking, new nuclear, or whatever else it likes – and the public say in the development of its own land will be a thing of the past.

What’s this about an Infrastructure Act?

From an explainer I wrote earlier in this fiasco:

The Infrastructure Bill has somehow managed to slip through to its Second Reading in the House of Lords from 1830 Wednesday 18th June 2014, with almost zero news coverage – and I mean anywhere. I picked it up from Schnews and the keen politicos. So don’t feel bad for not having heard about it, feel bad for democracy.

The Bill contains a clause that will end local decision making over use of publicly owned land. As Schnews puts it, this ends the rights of Council’s:

in granting or denying planning consent, cancels any rights of way or any need to ask the people of England and Wales if they mind losing their parks, playing fields, allotments, woodlands, public facilities or village greens to housing developers, fracking companies, road- or railway-builders. It’s the land grab to end all land grabs.

The government has also ordered local authorities to transfer up to 90% of brown field sites (previously developed sites that have become vacant, contaminated but could be reused) into the hands of the Homes and Communities Agency (the latest quango) where Eric Pickles (and his successors) and just two inspectors will control the planning decisions.

The Infrastructure Bill contains a clause which will allow ALL public land to be privatised. There’s no need to reference the Forestry Act 1967, the Countryside Rights of Way Act or any other protective law, because Schedule 3 of the Bill– states that “the property, rights and liabilities that may be transferred by a scheme include… property, rights and liabilities that would not otherwise be capable of being transferred or assigned.”

In plain English, this means all preceding regulations, legislation and other protections for this site are null and void – fill your boots.

If this Bill passes, we will have the private sector deciding the sale price, planning requirements and development plans for publicly owned land.  The government is taking our land – our communally owned parks, rivers, beaches, moors, mountains and fields – handing the lot over to the control of one private company, and removing any democratic mandate for decision making whatsoever.

And they’re doing the same to the roads.

Those long sounded warnings about toll roads being re-established across the UK (such as the M6 – which has been a complete disaster) are also gaining relevance with the next element of this Bill.  The Highways Agency is also becoming a government owned company, rather than an executive agency of the Department of Transport. This means strategy for road-building, funding and yes, tariffs will be handed to the private sector aswell.

The bottom line, is whether its schools, hospitals or choosing what to do with our own land – this government promised a ‘localism agenda’ and delivered the greatest shift of power from local to central government since the days Thatcher.

So that’s how we ended up with the Infrastructure Act 2015.

After a tussle when more people became aware and opposed to the plans, the government announced it’s intentions to proceed this week, at 5pm on the day before the Easter holidays began. David Cameron dropped this bombshell privatization announcement while the country is closed for Bank Holidays and then flew off to sun himself in Lanzarote.

David Cameron has been criticised for flying to Lanzarote for his Easter break while Parliament is still sitting. pic.twitter.com/Oa8CR7Qlik

Why are they Doing This?

From the governments perspective, it’s all about speeding up planning decisions and avoiding the delay caused by local ownership of the decision-making process. The Conservatives never recovered from the bloody nose they received at the Hinkley Inquiry in the 80’s, where a group of committed, articulate and effective locals effectively blocked new nuclear development in the UK by utilising their democratic voice.

Ever since, such powers have been perpetually watered down. Now not only are the government attempting to strip these powers from local government, but from parliament altogether – removing all public interest and engagement, and turning these developments into purely commercial interests.

But it’s only the commonly owned land of the British public which will lose these vital protections.

Guess who is exempt from the Act? The Queen, and the aristocracy.

Despite being the largest landowner in the world, let alone the country, the Crown is exempt from the land grab. As will be the aristoracy who still own a third of Britain’s land.

Where will they put the drought-inducing, toxic fracking wells? The potentially catastrophic new nuclear power stations? Just as they put a £600m detour into the HS2 planned route to avoid the wealthy estates of Cheshire – all the pressure to build for industry, transport or housing will fall on the small amounts of public land left.

So What Can I Do About it?

These are lands, assets and roads that have been developed, protected and maintained by public employees with public money for hundreds of years – and our government is flogging them off like the family silver. They’ll likely be sold for below cost (like the Royal Mail, RBS, Northern Rock etc) for investment companies to sell on at a much higher price – and then we will become rental tenants of private landlords on our own land. A quick look at the housing sector attests to the dangers of such a foolish venture.

The changes in this Act, once made, will be enormously difficult to unmake.

This is not one of those moments to get all upset and resigned to the situation – concerted, swift and effective opposition is required. Now.

You can start by joining those who’ve signed the 38 degrees petition opposing the sale of the Land Registry.

There, that took all of 30 seconds.

The Public Consultation is closed, but here is the document – provide feedback to your local MP. Be the biggest pain the backside you are capable of being.

More widely, get involved with Occupy London, UK Uncut, the People’s Assembly, and other political and community organisations who challenge the whole system that permits such enormous transfers of power from the public to the private – without any democratic mandate whatsoever.

Do anything, but it’s time to do something.