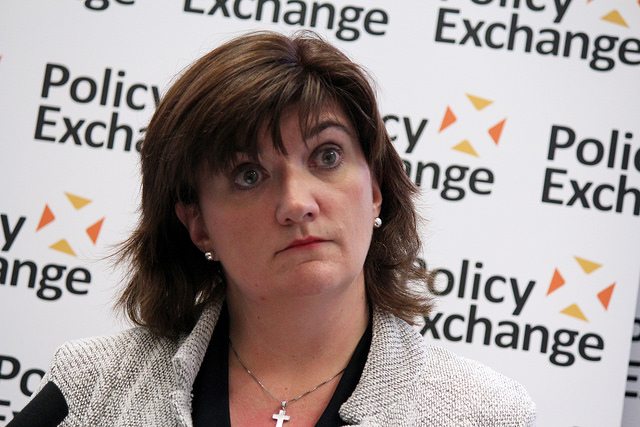 The government’s plan to turn all schools into academies is coming under increasing pressure, with opposition coming from all angles. From teachers releasing music videos to a Mumsnet backlash and even opposition from Tory councillors, questions have to be raised about how long they can continue pursuing this controversial policy.

A teacher in Leeds has hit back against Education Secretary, Nicky Morgan, by releasing a punk music video called ‘Nicky Morgan’s Eyes’ in what he described as a “wonderful form of rebellion”.

The song was released by English and Media Studies teacher Gary Kaye and his band, The Enemies of Promise, in response to the announcement that the government is planning to turn all schools into academies.  Mr Kaye said he wanted to give teachers “an anthem to (safety) pin their despair on”.

I decided to write this song for all teachers who feel under pressure and all students who are having their education tainted for ideological purposes.

The second verse of the song concentrates on criticising academies:

I’m giving them to businessmen who run academies

I don’t believe that teachers should be properly qualified

Experience counts for nothing and then I realise

It finishes with the line:

Nicky has departed from reality.

This is certainly the view of commenters on Mumsnet. Last week, Morgan made the mistake of writing a guest post on the site. In it, she claimed she wanted to “outline exactly what academisation means and why I truly believe this is the best way forward for our schools”.

However, her arguments were quickly demolished by readers in a comments section which has now reached over 1000 responses over two threads, with criticisms covering every angle of the policy.

Poster tangerinesarenottheonlyfruit asked about Morgan’s claims to give parents a stronger voice:

If you want parents to have a stronger voice, why are you doing away with parent governors, as will happen with the move to academies? Why change from a system with democratically elected stakeholders, to a system with remote, skills-based governors instead who represent business rather than the parents and the local community?

Several comments were from teachers, including Haggisfish who voted Conservative in the last election:

Hahaha! Parent and teacher here. Utter twaddle by Nicky Morgan. Thank goodness for the children I teach-they are the only thing keeping me in my job at the moment. My Dr has said he will sign me off with stress because of the ridiculous demands put upon us by government. I voted Tory as I truly believed in those who can work, should work. Last bloody time I ever vote for them, rest assured.

Other teachers, such as ravenAK, wrote about how they felt they had been forced to leave education:

I am an experienced teacher of a core subject.

I have moved overseas with my three children.

You have put us in a position where emigration is a far superior option for my family than working or learning in the UK education system.

I get that on a human level you are probably an ok person who has inherited a shit portfolio from a toxic predecessor who is still interfering – I’m a teacher. I can totes empathize with that one! – but the above is just embarrassing.

A large number of posts highlighted how “patronising” Morgan’s post was. Others criticised Morgan for not having the decency to respond to the large number of comments her post generated.

However, whilst thousands of parents, teachers and concerned citizens is pretty damning for the Tories and their educational policy, to make matters worse, their own councils are now turning on them.

Miranda Tilley, who has been a Conservative Councillor for 18 years, and a cabinet member for education on Oxfordshire County Council, which covers David Cameron’s own constituency, went as far as to say, “I think they’ve gone bonkers”. She further stated:

If it’s not broke don’t fix it. I don’t think schools should be forced. We’ve been supportive of the government’s agenda. We were going along quite well, helping schools to convert where we could. Now all of a sudden they are going to force the rest of them. It makes my blood boil. I’m put in a position where I can’t protect schools. One size does not fit all.

And this criticism continued from Tory councillors across the country. In Leicestershire, Ivan Ould, cabinet member for children and families, and a former headteacher said:

I hold a different viewpoint. If you’ve got effective local authorities you should take the best practice and expand it across the county. This seems to be throwing out good practice for the sake of dogma and risking the possibility that standards may fall.

I do not believe a system driven by dogma will meet the needs of children. I’m not comfortable with coercion. If the idea is such a wonderful idea, why is there any need for coercion?

Meanwhile, in Essex, Ray Gooding, cabinet member for education on the county council, where two-thirds of the schools are already academies, was also critical:

It would be better if it could follow its own course rather than being bludgeoned along.

Meanwhile, people in all parts of the country have taken to the streets in emergency demonstrations against forced academies, and over 100,000 people have signed a petition calling for the plans to be scrapped. This video is from the London protest:

Given this deluge of opposition, surely it is only a matter of time before the government is forced into yet another embarrassing U-turn. It is now essential that we keep up the pressure from this mass opposition and ensure the government are forced to withdraw this policy that will punish children for generations to come whilst private companies profit.

–Write to your MP to tell them what you think about the government’s plans for the education system.