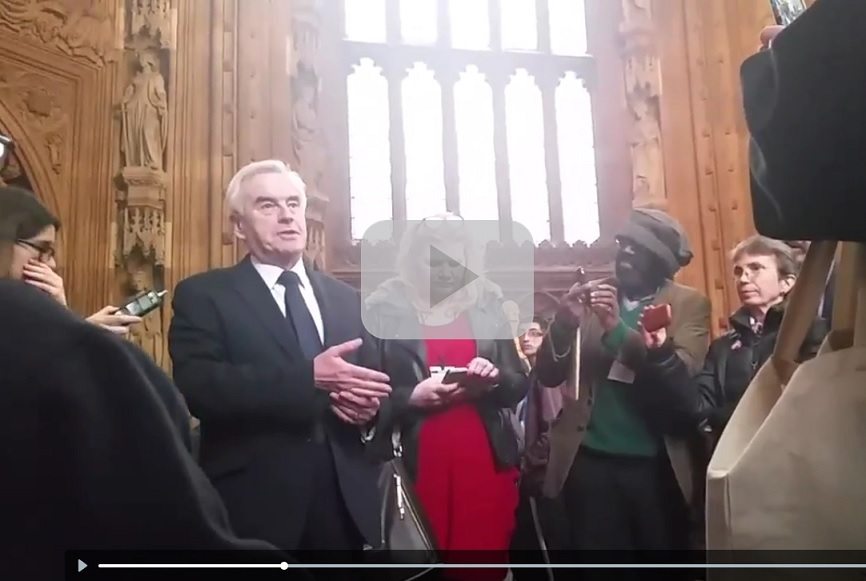 Shadow Chancellor John McDonnell has been praised today for his show of support for disabled protesters occupying the Central Lobby of the Houses of Parliament.

After the 23 March Prime Minister’s Questions (PMQs) had finished, McDonnell joined disabled protesters who he said were “rightfully angry” at the Conservative government over its attacks on disabled citizens:

Came out of #PMQs to meet disabled protesters who are rightfully angry with way they have been treated by this Gov pic.twitter.com/nCUXo83YDk

The following video showed the Shadow Chancellor speaking to these protesters. In particular, he emphasised his party’s demand that government cuts to the employment and support allowance (ESA) be reversed, and Labour’s current opposition to welfare cuts in general:

The full video can be seen here.

The difference between Osborne and McDonnell

George Osborne’s March budget initially planned to cut disabled citizens’ personal independence payment (PIP), but was forced into a U-turn by the strong opposition which emerged from within the Conservative party itself. McDonnell, on the other hand, has not only opposed welfare cuts, but has also suggested Labour would reverse them if it came to power.

On 23 March, McDonnell insisted that the government should apologise for planning to cut the PIP in the first place, saying:

To propose taking up to £150 a week away from disabled people that helps them to live independently and with dignity is a chilling example of the lengths Osborne is willing to go to in putting his own political career ahead of the long-term good of our nation.

In order to fill the financial black hole left by the government’s U-turn, meanwhile, the Shadow Chancellor says that Osborne:

could, very easily, pay for PIP by reversing his cuts to capital gains tax, which benefit the richest 5%, and the projected cuts to corporation tax.

He also calls on the government to heed the advice of organisations like the IMF and the OECD by driving public investment up rather than cutting it. Labour’s plans have been both developed and supported by “world-leading economists”, he says, and they aim to “eliminate the deficit fairly” without enforcing destructive cuts on the most vulnerable people in British society. What McDonnell is saying is that, however dark reality may seem under the current government, there is hope. There are alternatives to government austerity. And there are politicians who stand up for vulnerable citizens.

Osborne, meanwhile, is still clinging on to his surplus target. For McDonnell, this is an absurd decision, given that “not a single respectable economist” defends the Chancellor’s plans – which he says are “devoid of basic morality”.

Politics is rarely black and white. But in this case, we have one chancellor standing against the vulnerable, and the other standing alongside them. And it’s about time politicians stood together with citizens rather than against them. The more this continues, the more McDonnell’s reputation as the People’s Chancellor is likely to grow.

– Support The Canary so we can continue to bring you what the mainstream media omits.

– Write to your MP and ask them to explain how the government plans to fill the black hole in its current economic plan.