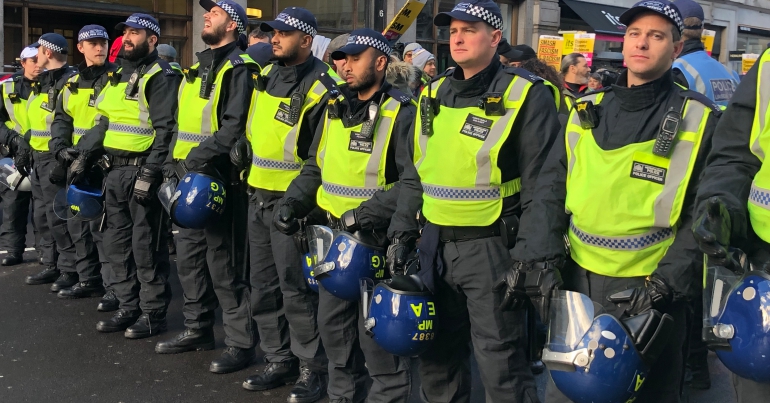 On 17 June, the Guardian published a letter from 152 politicians, lawyers, academics, journalists and campaigners calling on the police to stop labelling protesters as domestic extremists.

Other signatories to the letter are also on the domestic extremist database. These include the Green peer Jenny Jones, writer and performer Mark Thomas and John Catt, a campaigner who took a successful challenge on his inclusion on the database to the European Court.

The letter, organised by the Network for Police Monitoring (Netpol) states that:

Categorising legitimate free speech and dissent as “domestic extremism” intimidates and alienates people from taking part in protest activities, restricting their ability to exercise their rights to freedom of assembly and association. This cannot continue.

Netpol is currently running a campaign to abolish the domestic extremist label. And the letter supports its campaign:

We collectively support the demands of the Network for Police Monitoring’s “Protest Is Not Extremism” campaign, which calls on the police to stop categorising campaigning and protest activities as domestic extremism. We also seek a clear separation of protest policing from counter-terrorism and better protection for campaigners against surveillance, including independent oversight of how police use it in relation to political protest.

As Netpol’s coordinator Kevin Blowe set out in a guest post in The Canary, it is ridiculously easy for campaigners to earn the domestic extremist tag. And this was one of many reasons why I was more than happy to sign Netpol’s letter.

Because I fall into three of the five categories Blowe described: I’m perceived as an organiser, have been involved in campaigns that challenge corporate interests and have taken part in direct action campaigns.

But it’s not just the fact that this means I’m on a police database that is damaging. The damage comes through how the police treat people they decide are domestic extremists.

I’ve written about it on several occasions. But the label basically means increased police harassment. It means arbitrary arrests. It means being targeted for stop and searches. Over the years, I’ve been followed during and after protests; I’ve had cops turn up on my doorstep; I’ve had senior police officers threaten to ‘get [me] sent down for a long time’. In addition, one of my best friends turned out to be a corporate spy for BAE Systems and I’ve been friends to varying degrees with at least five undercover cops.

Police violence and harassment has caused two breakdowns. During the first, I ended up in A&E, having drunk too much, vomiting blood, with dangerously low blood pressure and hallucinating cops in the place of paramedics. During the second, my body just gave up. I was constantly sick. Trauma filled every pore and seeped out into every aspect of my life. I’d gone as far as I could mentally and my body reacted with physical symptoms to make me finally stop.

And it’s not as though the information collated on the domestic extremist databases is even accurate. The parts of my files which I’ve seen, which I know are a small fraction of the data kept on me, contain multiple mistakes. They include, for example, sightings of me on protests I haven’t been on.

But more significantly, information is manipulated. The narrative isn’t neutral. It’s designed to paint me in a bad light, as an aggressive violent troublemaker. So, for example, several alleged assaults on police officers are included in my files. But what’s not noted is the fact I was acquitted of the charges. Not noted are the times when, after these alleged assaults, I’ve successfully sued the police. In one incident, where there’s a description of how “violent” I was, there’s nothing saying it was the police that were at fault. The fact I received compensation and an apology from the police for what they did to me is not included.

So the police create a myth; they create a picture that justifies their jobs and labels but doesn’t match reality. And it’s incredibly dangerous. Because it is the police’s narrative of my behaviour that influences how I’m policed in the future; how bail assessments are made; how I’m treated on the streets. It becomes a vicious circle.

The freedom to protest is threatened by constant, unnecessary and intrusive surveillance, which the ruling acknowledges can have a chilling effect on participation.

And it does. I’ve been told by people that they stopped going to protests because of police surveillance. And people used to tell me they wouldn’t do as much as me, as they couldn’t handle the level of police harassment I used to receive.

But the “chilling” effect goes further. It is literally chilling reading the files the police hold on you. A coldness that runs up your spine and through your body when you realise that the two-minute conversation you had with a cop when two of you were stood outside a local bank with a banner (and no names were given) is on your file; when your traffic stops in your local town are noted and the depth of the information held starts to take hold.

But at the point I realised my son was named and included on my files, that chill turned to pure ice.

Because I’m not some hardened criminal. I’m in good company on the database with some of the bravest people I’ve ever met. And none of us engage in serious criminality. Our inclusion on this database is because we believe in a better world, so we’re unable to just sit back and not do anything to create that better world.

But it’s not all doom and gloom. We can fight back.

Netpol’s new campaign is one of the ways people are fighting back against this label. As Blowe told The Canary:

One reason why we are making a push in 2019 to end the categorisation of campaigners as extremists is that we know people we speak to have absolutely had enough. From hunt sabs and anti-fracking campaigners to activists working on Palestinian and Kurdish solidarity, people are angry and frustrated as the way the police continually delegitimise their right to freedom of expression and assembly.

January’s victory in the European Court of Human Rights won by Brighton peace campaigners John and Linda Catt also convinced us there was no point demanding the police try again to come up with a definition of “domestic extremism” that might actually stand up in court. They had been found to have acted unlawfully. This simply cannot continue.

And we can win

But not only can we fight back, this is a fight we can win. As Blowe stated:

We have been asked whether, as a small organisation, our demand that the police to completely stop using “domestic extremist” against campaigners is largely symbolic, whether we really have any chance of forcing this change.

I firmly believe we can win this, that the Home Office and the police already know the use of this categorisation is no longer tenable.

However, we want to go further and see public order policing separated completely from counter-terrorism, which has no business targeting legitimate political dissent. We also need far better legal protections against surveillance at protests. Right now, the police can pretty much do whatever they want.

But we can stop the police doing “whatever they want”. And everyone who wants to live in an actual democracy should get involved with this campaign. No-one should be deterred from protest due to police surveillance and harassment. Protest is not terrorism. And no-one should be on a police database for trying to make the world a better place.