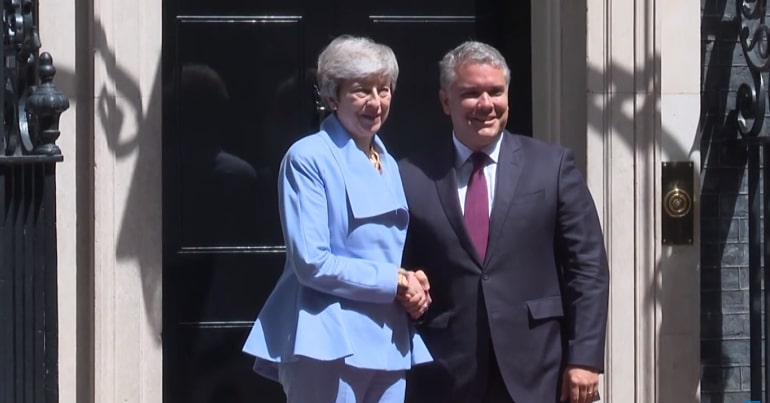 On 17 June, outgoing UK prime minister Theresa May welcomed Colombian president Iván Duque in London. Before the meeting, fierce protests met the Colombian president in light of increasing killings of social leaders in Colombia, his government’s abysmal response, and the consequent risks to the 2016 peace agreement.

They also laid a list of names on the floor to highlight the social leaders and human rights defenders killed in Colombia since 2016, when the government signed a peace agreement with the FARC – formerly the country’s largest guerrilla insurgency group.

According to the Real News Network, “over 700 social leaders and 135 rebel fighters have been killed in Colombia” since 2016. The primary aggressors against social leaders are Colombia’s right-wing paramilitary groups, which have historic links with the Colombian state, foreign multinationals, drug traffickers, and local elites.

Since Duque’s election in 2018, this pattern of violence has become significantly worse. 2018 was reportedly “one of the worst years for Colombia’s social leaders”. And figures from the first quarter of 2019 suggest killings of social leaders are “exponentially increasing”.

According to Downing Street, the conversation focused on “climate change” and “strengthening trade and investment”:

Duque also thanked the PM for:

her support for our agenda of reincorporation, through which we want those who were part of illegal armed groups to move from violence to legality.

The “strong partnership” between both countries, however, has been a historic cause of political violence in Colombia. As I previously wrote:

During the 1990s and 2000s, the Colombian military was one of the Western hemisphere’s worst abusers of human rights. For these years, the UK government consistently provided Colombia with military assistance and arms. And it seems likely that this was inspired by British Petroleum’s (now BP) considerable capital interests in the country.

Duque will reportedly remain in the UK until Wednesday.