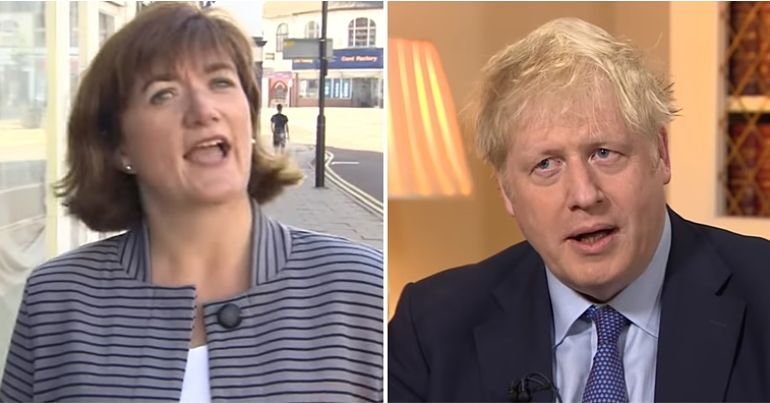 On 16 January, Nicky Morgan heaped praise on Boris Johnson, claiming he’s “prime ministerial” in the way he conducts business. This is a far cry from the scorn she poured on him less than two years ago. In 2018, she said “would not serve in a Boris Johnson Cabinet”. So the fact she still holds a cabinet position represents a massive U-turn.

She’s not only serving in his cabinet but also showering Johnson with praise. Needless to say, this didn’t go unnoticed, and people online were quick to highlight Tory hypocrisy:

Morgan took the opposing Remain side to Johnson in the 2016 referendum campaign. What’s more, in September 2019, she said she would vote Remain again if there was another referendum. It’s difficult to believe someone like that can still sit in Johnson’s Brexiteer cabinet.

“completely appalling” remarks after he said Theresa May’s Brexit deal had “wrapped a suicide vest around the British constitution”.

And Morgan went further. She said she believed Johnson had deliberately chosen this language:

This is the second time now he has chosen deliberately incendiary language which just masks the ability to debate the issues and reflects very badly.

Despite being this opposed to Johnson, it didn’t stop her accepting the culture secretary role from him in July 2019. And even though she didn’t even stand in the December 2019 election, she continues to hold that portfolio. But she does so from the House of Lords.

So in 2018 Nicky Morgan said “I would not serve in a Boris Johnson Cabinet” Now she is his biggest fan. Extraordinary. https://t.co/OILGMH7T1N

Some people weren’t at all surprised to see such hypocrisy from the Tories:

Another person was much more to the point. She believed Morgan’s appointment to the House of Lords may have had something to do with her U-turn:

Keep calling it out

Judging by the reaction online, a number of people weren’t overly surprised by this latest example of a Tory U-turn. But no matter how normal it may be in that party, it’s never acceptable to wider society. The British people deserve better, so this hypocrisy will never go unchecked.