Brexit-fuelled nationalism is only one step removed from fascism. It has to be confronted. Now. - Canary 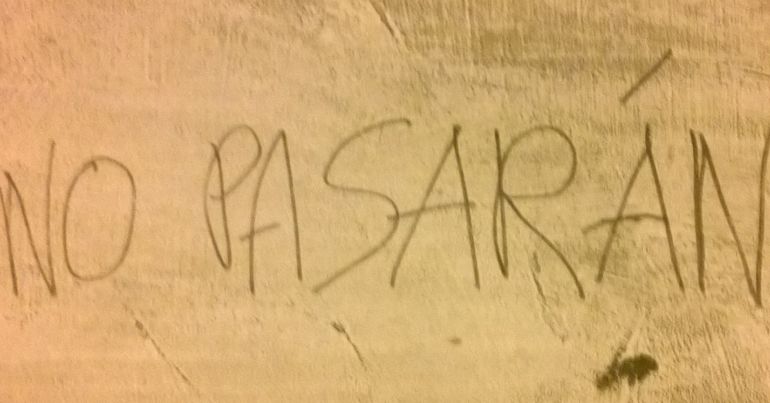 A poster, put up in a block of flats, told residents “we do not tolerate” people speaking languages other than English. A sign bearing the title “Happy Brexit Day” was found stuck to fire doors on Winchester Tower in Norwich on 31 January. The discovery came hours before the UK officially left the European Union.

But this is only one such incident in a climate of rising hate crime across the UK.

Addressing Winchester Tower residents, the poster said the “Queens (sic) English is the spoken tongue here”. It suggests that people wanting to speak a language other than English should leave the country. According to the BBC, which spoke to a resident, the signs were left on fire doors across all 15 floors of the block of flats before being removed by the caretaker.

A photo of the poster shared in news reports and on social media revealed that it declared: “We finally have our great country back”.

The poster urges residents to "evolve or leave" following the UK's departure from the EU. https://t.co/6c3NDdEnET

One resident, who has lived in the block for around six years, said several eastern European families live in the flats.

Becky Barnes quoted one resident, who thinks it’s only going to get worse:

"It’s really worrying, because it feels like it’s only going to get worse as time goes on.": This disgusting racist #BrexitDay note was put up in a Norwich tower block yday – it has been reported as a hate crime https://t.co/iqP3bUDW7u

And this tweeter reminds us that hate crimes are not just about race:

@Stonewallhousin we welcome any language you want to speak at home -unless it’s the language of hate. Racist or homo,bi and transphobic abuse are crimes https://t.co/hcA4fgJxKw

In reference to the poster, Norwich City Council said Norwich has a proud history of being a welcoming city:

I absolutely condemn this abhorrent poster. Whoever put it there has committed a hate crime, it is as simple as that.

Many people voted for Brexit for a range of different reasons, however I am sure not many of them will condone this kind of thing.”

But the poster is only one incident of hate crime.

Author Monika Wiśniewska highlighted that people of Polish heritage are now being described as “vermin”:

I will never forgive the English calling me and my countrymen Polish Vermin. Never. https://t.co/rO28pVXWpm

The term “vermin” was used by Nazis when referring to Jews and those of other races they despised.

Journalist Peter Jukes tweeted an apology to Wiśniewska and added that Polish pilots and cryptographers helped Britain defeat the Nazis:

Polish pilots were key in the Battle of Britain. Polish crytographers gave Turing the keys to crack the Enigma code. Apologies Monika for our ignorance and forgetfulness. To all Polish – Kocham Cie Bardzo. https://t.co/9yAAUYtNKT

Indeed, it was Marian Rejewski, Henryk Zygalski, and Jerzy Różycki who cracked the Enigma code well before Alan Turing played his part at Bletchley Park. And the role of Polish pilots in the Battle of Britain proved pivotal in defeating the Luftwaffe.

Whether it’s vile posters like the one in the Norwich block of flats, or insults directed at Poles and others from across Europe, they all amount to hate crime.

Politicians, including Boris Johnson, have been accused of encouraging the rise in such crime. Indeed, England and Wales logged 94,098 hate crimes in 2017/18. This represented an increase of 17% from 2016/17.

As for Brexit-fuelled nationalism, it hides behind a cloak of pseudo-patriotism and is but one step away from fascism. It has to be confronted before it’s too late. No hiding place.

Or, as the anti-fascists in Spain would cry out, ¡No pasaran!