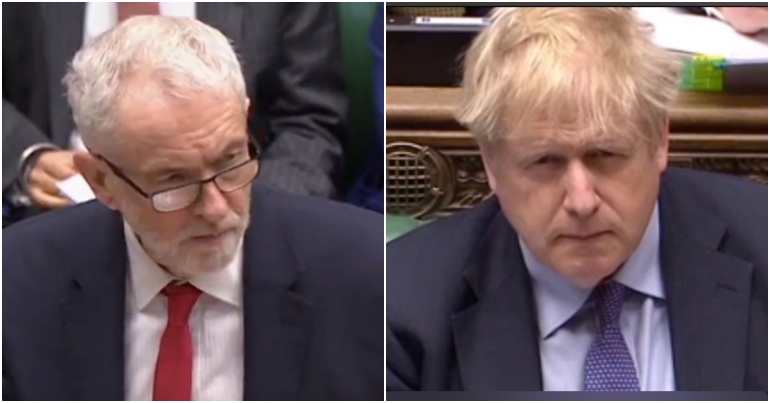 After the government deported 17 people to Jamaica, Corbyn’s question was an absolute truth bomb.

“A young boy with blonde hair”

The deportations came despite widespread outrage and a series of successful legal challenges. Although the Court of Appeal ruled some were not legal and later rejected a Home Office appeal against its decision, by this stage too many people had already been placed on coaches and were denied phone contact with lawyers and relatives. As The Canary reported, the case has prompted new fears of another Windrush scenario, and many people feel it’s inherently racist and discriminatory against Black people. Yet the government refused to apologise.

Most of the so-called ‘Jamaica 50’ stood judged for past crimes and completed prison sentences. So Corbyn asked Johnson if he thought:

that someone who came to this country at the age of five… was the victim of county lines grooming and compelled to carry drugs, released five years ago and never reoffended, deserves to be deported?

Yet according to Johnson, it’s “entirely right that foreign national offenders should be deported from this country in accordance with the law”. As Corbyn rightly pointed out, the government has “learned absolutely nothing from the Windrush scandal”.

He also accused “this cruel and callous government” of “trying to mislead the British people into thinking it’s solely deporting foreign nationals who are guilty of murder, rape, and other very serious offences”. Although this is what the official government response to the deportations insisted, as Corbyn pointed out, it’s not true. Stories have since emerged that show many of those threatened with deportation didn’t commit “serious offences”.

And then, Corbyn went for the jugular:

If there was a case of a young white boy with blonde hair, who later dabbled in class A drugs and conspired with a friend to beat up a journalist, would they deport that boy?

Johnson’s face as Corbyn spoke said it all:

The face that says "how dare you compare a privileged white man to black men I'm deporting for doing the same thing I've done"
#PMQs pic.twitter.com/vkmFujlfmZ

There’s absolutely no doubt who that “young white boy with blonde hair” might be:

“If there was a case of a young boy with blonde hair who later dabbled in class A drugs & conspired with a friend to beat up a journalist, would he deport that boy?”

We know who Jeremy Corbyn’s talking about, don’t we? And so does Boris Johnson 🔥#PMQspic.twitter.com/NZQkn7yWEw

Johnson was born in the US and, in 2008, he confessed to snorting cocaine and smoking “dope” as a teenager. Later, a secret recording showed Johnson telling his friend Darius Guppy that he’d pass on News of the World reporter Stuart Collier’s address. This was so Guppy could beat him up.

Corbyn was absolutely right to challenge both Johnson’s shady past and the vile racism of this Tory government. Respect.