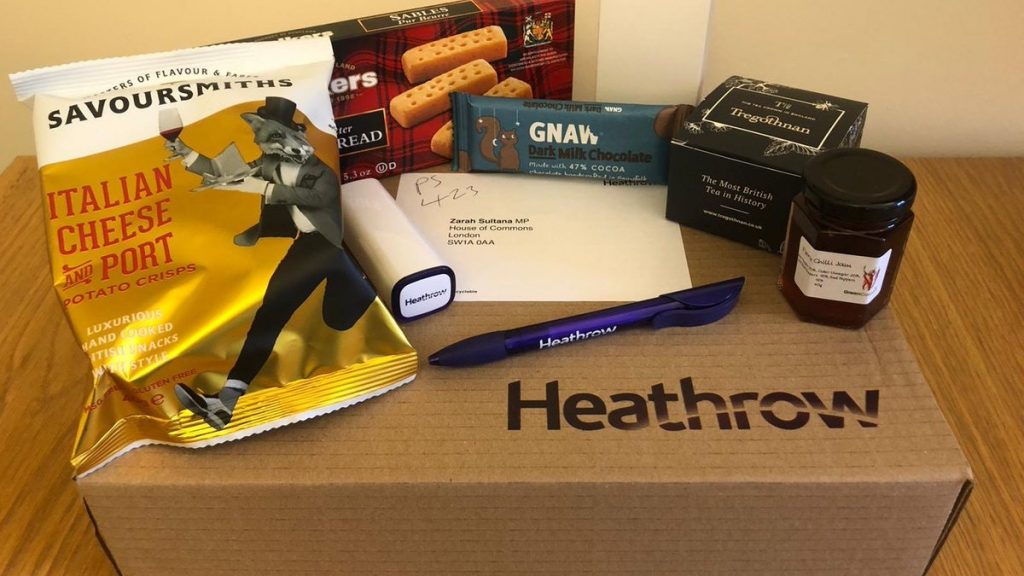 MPs have hit out against Google and Heathrow for attempting to “swing votes” with packages of jam, biscuits and crisps.

Politicians have received, for example, packages from the team behind the Heathrow expansion. These contained cheese-and-port-flavoured crisps, shortbread, a chocolate bar, a charging bank, jam, tea, and a pen. New MP and Labour rising star Zarah Sultana responded by tweeting:

It was nice of you to send me this, @HeathrowAirport, but I still think building a third runway will accelerate the climate emergency and should be cancelled 🙂 pic.twitter.com/VjySu3Xljg

She had previously posted:

Thanks for the gifts, @GoogleUK, but I’d rather you paid your fair share of tax 🙂 pic.twitter.com/vDkCacdBUp

Thanks for the goodies @GoogleUK and @YouTube but I still think you should pay your fair share of corporation tax. pic.twitter.com/qmHb2w0Vk7

Sultana followed these tweets up by stressing that they are an example of regular “lobbying for the super-rich, not for working people”:

Seriously though, I don’t think people realise how much lobbying of MPs there is by big business.

From little things like this, to receptions, dinners & free trips abroad – & that’s just for backbench MPs.

Remember, they’re lobbying for the super-rich, not for working people. https://t.co/iVGUiUqgDl

(Whether a packet of crisps, some jam, shortbread and a charger will swing any votes on a major national infrastructure project… 🙄) pic.twitter.com/SadXGTIsfM

The Heathrow third runway project was given outline approval by MPs in June 2018. However, in December the Civil Aviation Authority refused to approve the airport’s bid to nearly quadruple the amount it spends before obtaining final approval, over fears passengers would foot the bill if the project did not go ahead.