A group of women hit by a controversial government policy have delivered a message to the new chancellor, Rishi Sunak. But will their message fall on deaf ears?

As ITV News reported, on Saturday 15 February, campaigners protested outside Cardiff Castle. It was about a change to state benefits. People came out in support of Women Against State Pension Inequality (WASPI):

On a very wet Welsh Saturday , #WASPI and the 1950’s Women of Wales have gathered in the Capital to protest the pension changes that have seen women born in the 50’s having to work an extra 5 years. The pension age for women is set to rise to 66 later this year. pic.twitter.com/oY64m8KABA

The government policy shift they were protesting about has affected millions of women.

Swindling women out of money?

As the WASPI campaign explains, the result of these reforms is that:

hundreds of thousands of us are suffering financial hardship, with not enough time to re-plan for our retirement. Women are telling us that they can’t believe their retirement age has increased by 4, 5 or 6 years and they didn’t even know about it!

They have seen their retirement age increase by up to six years. It has meant women cannot claim their pension until 65 from November 2018 and until 66 from October 2020. But the changes haven’t just affected working women.

What people don’t always realise is the WASPI scandal doesn’t just mean some women have to work longer. It’s also caused a surge in benefit claims. As a parliament research briefing found, between May 2013 and May 2019 there was a staggering 382% increase in the number of women over 60 claiming out-of-work benefits like Jobseeker’s Allowance (JSA). That is, of course, just the women who claim benefits. There may be thousands more struggling on their partner’s pensions.

The highest benefit rises were in the north and Scotland: 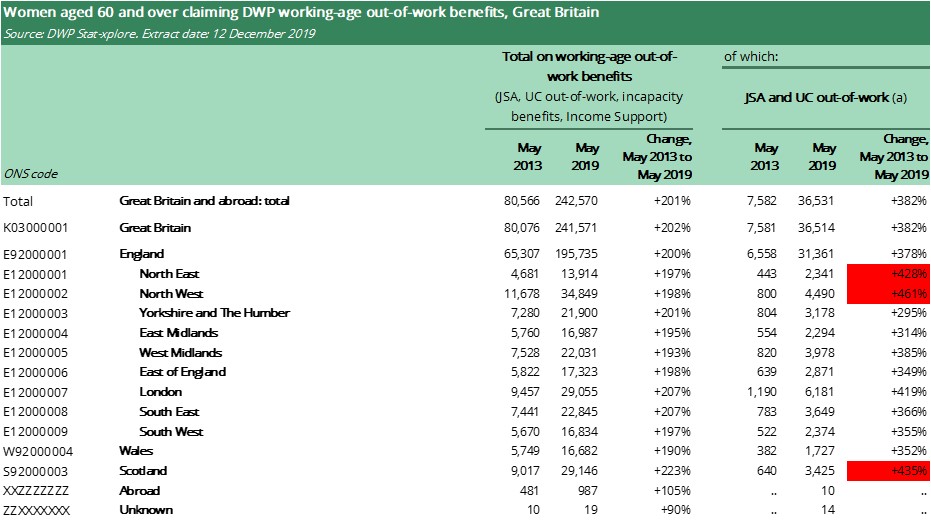 After losing a High Court battle over the changes, another campaign group, Back to 60, is appealing the decision. Also, as The Canary previously reported, parliament has repeatedly debated this issue. But successive governments have refused to budge.

“One of the greatest injustices of recent years”

Cardiff West MP Kevin Brennan was at Saturday’s demo in Wales. He said:

this group of women have been terribly treated by the state. It’s an injustice, what’s happened. They were told all along they’d get their pensions at 60… it’s one of the greatest injustices of recent years

Campaigners now want the new chancellor Rishi Sunak to look again at the issue ahead of the budget, scheduled to be in less than a month’s time.

But the signs aren’t good that the WASPI women will get anywhere with Sunak.

A new chancellor: a new broom?

In 2019, he agreed that pensioners living in the EU should have pension rises stopped three years after Brexit. Moreover, he said that adult social care being funded by an additional contribution scheme would form “part of” the government’s “conversation”. And he also dodged an MP’s questions on potential post-Brexit “freeports”, where tax regulations are reduced – but where conversely employers may skip people’s national insurance contributions, leading to reduced pension pots.

It’s unlikely that Sunak, or the new Conservative government, will give any ground to the WASPI campaign. So, it seems the fight for fair treatment of millions of women will continue.